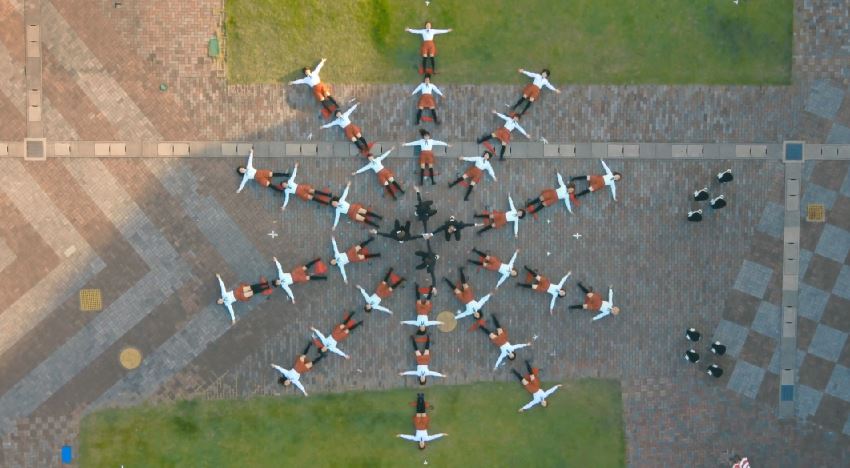 Segway dancing, thousands of Japanese schoolgirls, and a continuous shot taken by a drone-mounted camera…

… It must be the newest music video by OK Go.

Alternative Pop band OK Go, masters of the viral music video, just released a new flick for their “I Won’t Let You Down” single.

Every time the band seems to have outdone themselves, they push the envelope with something new. Directed by Morihino Harano, the four men glide around the Longwood Station Studios courtyard on Honda Uni-Cub segways, joined by hundreds of synced dancers, for fantastic visuals from all angles.

Like OK Go’s “This Too Shall Pass” & “The Writing’s On the Wall” one-takers, there is a sense that we are watching raw footage, with only the ends trimmed off. When crew members (actually a cameo of Japanese pop group Perfume) prepare the shot in the beginning, their actions are fast forwarded, which means the action/music were performed at half-speed for safety. This was a crucial production decision for operating a complicated drone shot, while choreographing almost 2500 cast, crew, and extras.

As the drone ascends upward for the finale, the array of dancers turn into an unbelievable LED-like marquee, shaping the band members’ faces, and the occasional “アイ ウォント レッチュー ダウン”, phonetic Japanese for “I Won’t Let You Down”.

Whether or not you like their music, OK Go will continue to wow audiences worldwide with visually impressive music videos.