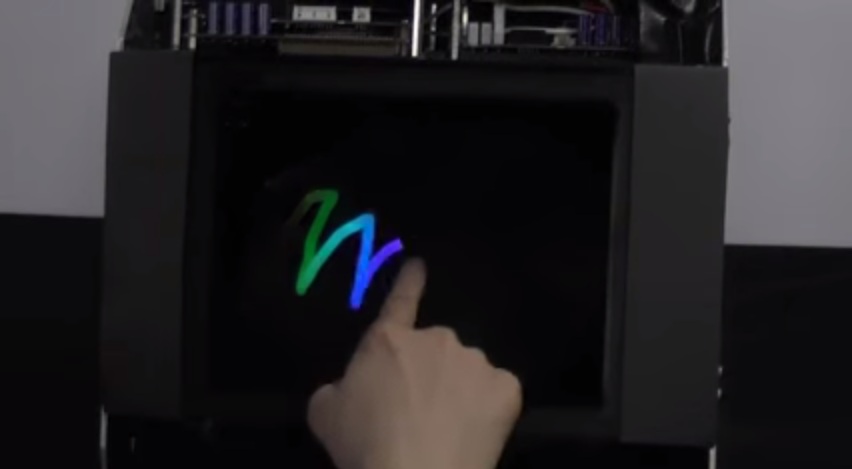 Okay so, we get the idea of ‘tangible holograms‘, but we’re probably not actually ready for a home 3D hologram system yet. Closer to what we are using now, the researchers of the University of Tokyo may have given us the simpler and more practical version: a touchscreen that gives us real physical tactile feedback.

HaptoMime, much as the other technology that just recently preceded it, also allows users to feel as if they are really touching the object on a visual interface (in this case, a touchscreen). Granted, it’s not quite the same as your average capacitive touchscreen, but the idea is quite similar. The touchscreen uses ultrasound to generate the physical tactile feedback, while an added reflective surface projects the screen, along with the floating ‘tangible’ virtual objects in front of the user.

Basically, the force of the sound waves gives the user a solid object sensation, while the projected images give the visual illusion of a solid object. The IR touch sensor frame makes sure that the virtual objects do interact with the user’s fingers accordingly. Since touchscreens dynamically change button interfaces, it would feel as if there is a different solid surface, icons and buttons every time you use it.

Still not sure how that works? Here’s their demo video for a more ‘tangible’ explanation:

Of course, the concept of using physical tactile feedback to touchscreens isn’t new. Tactus Technology provided a similar idea a few years back, introducing the concept by using an actual screen layer. While there are no reflective projection gimmicks, the layer, which is placed directly on top of the touchscreen layer, is capable of dynamically changing shape, molding itself into the shape of the buttons on the screen. It is in a sense very similar to HaptoMime, and it is quite likely that we may even in fact, witness the birth of an entirely new concept that takes both concept’s best specialties.