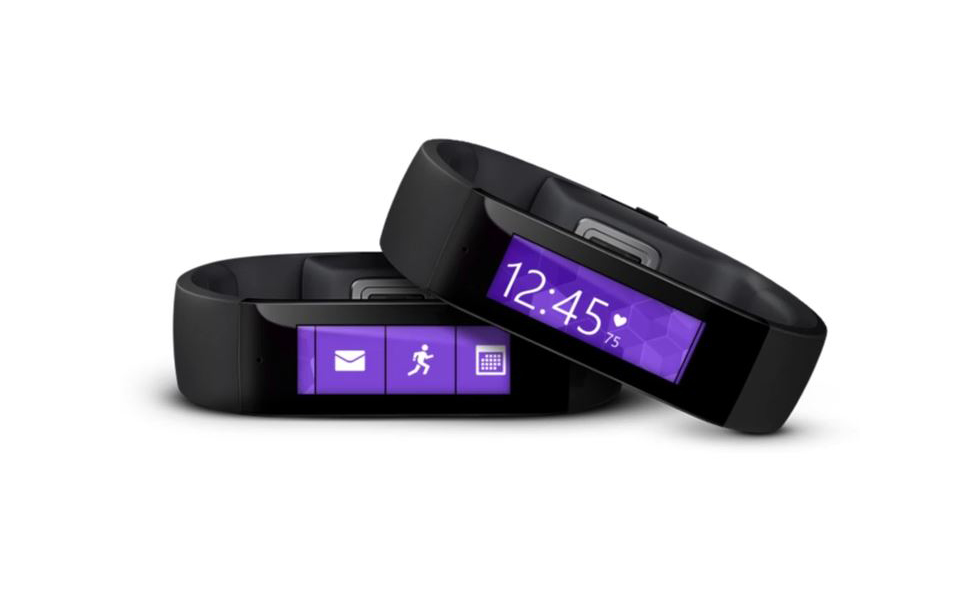 The company has also already gotten themselves partnered up with Runkeeper, Gold’s Gym and MyFitnessPal in order to give you the best guided fitness experience possible.

In terms of hardware, the Microsoft Band appears to be right up there with their competitors featuring a 1.4″ LCD with a 320 x 106 resolution and 48 hours of battery life, without GPS enabled. It also comes jam packed with more sensors than virtually any other device out there. It features an optical heart rate sensor, a 3-axis accelerometer and gyro, a gyrometer, a GPS sensor, an ambient light sensor, a skin temperature sensor, a UV sensor, a capacitive sensor (display), a galvanic skin response sensor and a microphone. It also features Bluetooth 4.0 (LE) which is what allows for the 2-day battery life. This is all powered by dual 100 mAh batteries, which is why the band cannot be adjusted too much in terms of size. As a result, the watch will come in three sizes and you need to figure out which one fits the thickness of your wrist best.

The Microsoft Band also has a ton of other features which include the 24-hour heart rate monitor, run tracker, step tracker, calorie tracker and sleep tracker. It also has guided workouts and goal setting for the fitness conscious person that takes working out seriously.

There are also tons of alerts and notifications that are also available on the Microsoft Band, which include text messaging, calls, calendar, email and smart notifications for certain apps. There is also — shockingly — a watch mode where you can actually use it as a watch.

As if all of that wasn’t enough, the Microsoft Band also has weather, finance, and a timer/stopwatch functionality, which is admittedly expected of almost any wearable nowadays. The interesting tie-up that Microsoft did make, however, was with Starbucks to allow you to integrate your Starbucks card into the Microsoft Band, adding their own Seattle touch to this device and possibly pleasing a lot of caffeine addicted users.

The $199 Microsoft Band can already be purchased online via Microsoft Store or in person at any Microsoft Store. Be aware that there are three different sizes and that you should get yourself sized before buying one.