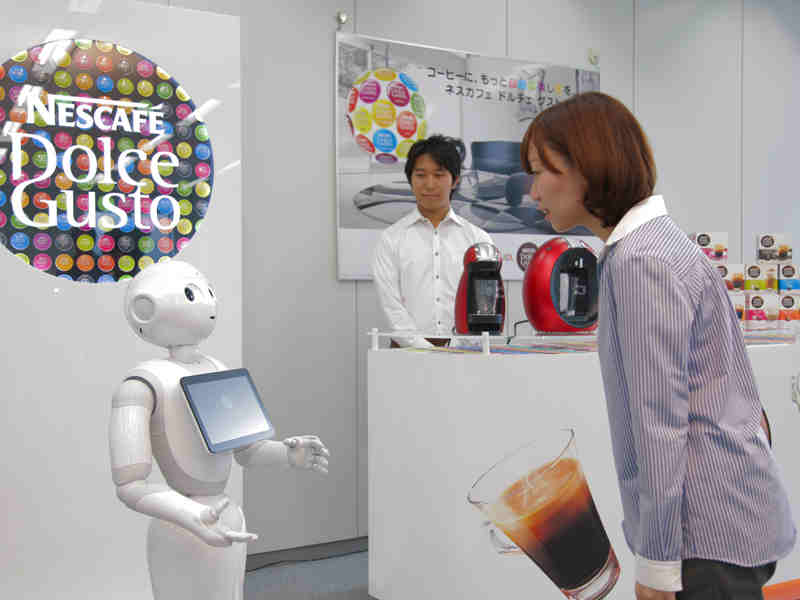 Nestle Japan (VTX: NESN), in a collaborative effort with Softbank (TYO: 9984), will be employing its latest interactive robot Pepper, as the company’s newest ‘product endorser‘. The friendly chatty robot will be posted on selected Nestle coffee machine stations nationwide, where it will help customers buy their coffee, and maybe even leave a greeting or two.

Pepper was a joint project between Aldebaran Robotics and Softbank. It was designed as a high-end social robot, capable of interacting with people using a variety of sensors, tracking devices, software and reaction algorithms. What’s unique about Pepper is that it is capable of analyzing emotional states, forming appropriate responses based its observations.

The Pepper units that will be posted on Nescafe coffee stations will be installed with a specialized app for general customer service. Provision of guidance and technical explanations will be one of its default functions, but it will also be programmed to ‘grasp’ the needs and preferences of its customers. In other words, it will serve as the customers’ interactive item menu and control panel, one that would most likely provide suggestions occasionally on what to choose or purchase.

The coffee stations would also include a variety of Nestle-exclusive coffee devices and products, such as the Dolce Gusto and Gold Blend Barista, all of which of course Pepper plans to properly introduce, explain, and offer to its customers. So if you’re feeling down, maybe Pepper can give you a few words of encouragement, and maybe a few good coffee selections as well to help you perk up.

Of course, this isn’t the first time Pepper was employed as a store clerk. It has been already used on a number of Sofbank specialty shops in Japan to welcome and guide customers.

Nestle plans to deploy at least 20 Pepper units on selected stations as early as December this year. The company plans to install at least 1,000 units on Nescafe coffee stations across the country by 2015.