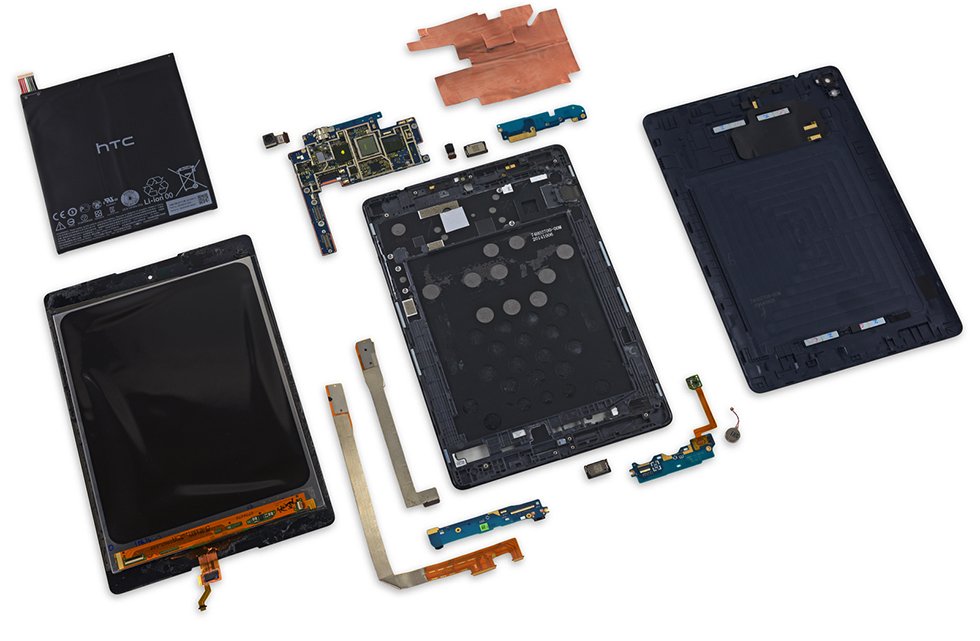 Thanks to the guys at iFixit and their absolutely astonishingly fast teardown of the new Google HTC Nexus 9, we already know quite a bit about the new tablet. The image you see above is actually the final image of their Nexus 9 teardown, showing all of the parts of the Nexus 9 individually. In the teardown, we find out some really interesting things about the tablet that may have been suspected but weren’t confirmed unless someone had torn it down.

One thing that was expected was that HTC included a 3.8 V, 6700 mAh, and 25.46 Wh battery, meeting the specs that HTC stated on their spec sheet. This makes it smaller than the iPad Air 2, but larger than the iPad Mini Retina. They also confirmed that the camera is an 8MP f/2.4 module that is the same as the one as the HTC Desire 610.

On the mainboard itself, iFixit was able to find exactly which version of the Tegra K1 that the Nexus 9 features, which is the dual core Denver 64-bit variant. This variant is labelled as a T4K885 01P TD590D-A3, meaning that this is A3 revision silicon and that Nvidia is without a doubt well into production silicon. The Nexus 9 also uses Elpida (now Micron) RAM, Samsung NAND flash, Broadcom BCM4354 MIMO 5G Wi-Fi module and a Broadcom BCM4752 GNSS receiver to complement whatever GPS is probably already in the Tegra K1.

There’s also an Asahi Kasei 3-axis compass, dual speakers and Synaptics touch controller as the rest of the components on the Nexus 9. Overall, iFixit gave the Nexus 9 a fairly poor teardown score of a 3 (as many HTC devices have gotten lately). The reason for the poor repairability score is because of the difficulty of removing the battery (which was glued on) and the fact that the LCD panel is fused to the glass of the display which makes repairing a cracked screen more difficult and costly.