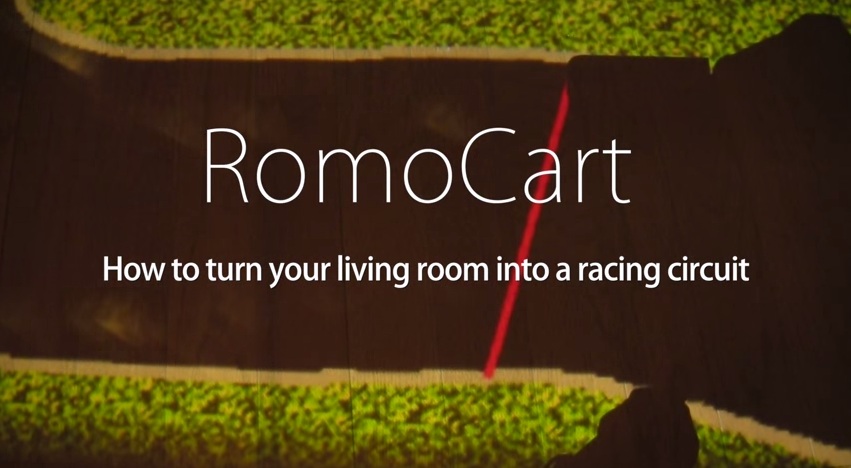 Ever wondered how wacky kart-racing games might look like in real life? Well, you probably can now, with this crazy innovation that turns a lovable little iPhone-based toy into an RC Mario Kart racer.

RomoCart is the name of this simple, independent project by Ken Kawamoto and Tomoaki Akitomo. It takes control of a Romo robot, which is actually a product of a previous Kickstarter project, and takes it onto a projected virtual race track. With a nifty and simple little trick called projection mapping, they were able to create an actively changing race course depending on the actual terrain the track is projected to.

Using ample camera tracking, and an RGB depth sensor, any room suddenly transforms into a Romo racetrack, with objects lying on the floor to be treated by the projected map as either makeshift doodads or imaginary obstacles. Users can then proceed to take the Romo bots on a tour around the track.

Of course, this wouldn’t be a race track if there aren’t multiple units involved, and remember what we said a bit earlier about kart-racing? Probably the most exciting part of this innovation is its unit tracking system. Yes, not only is the RomoCart able to adapt to whatever surface it is projected to, but it is also capable of tracking the Romo units as they run along the course in real time.

In the demo video, the devs showed how your Romo unit can launch virtual missiles to shoot against other competing Romo units, with the included proper special effects. Even better, each unit can be programmed to react to other different virtual elements or objects placed onto the virtual environment. Virtual banana peels for example, will make Romo units spin out of control upon contact, and a speed boost power up can temporarily jack up the speed of the Romo unit.

As cool as the concept is, the idea is well, just an idea for now. It’s not a launch project whatsoever, though the developers hints that they might release the source code for other Romo owners to experiment with. But if you need more details now, you can always visit their development blog (in Japanese).