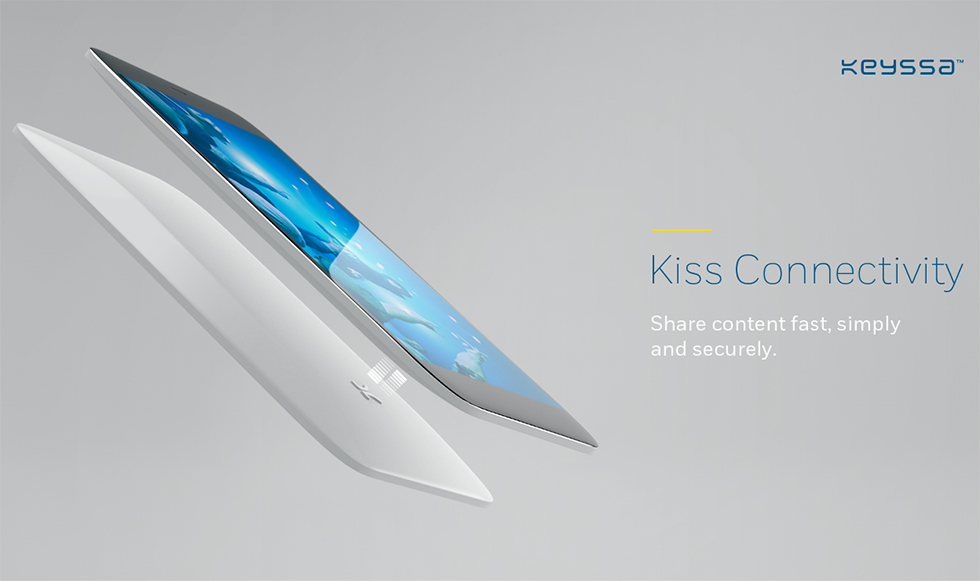 Keyssa, a company that has been in stealth mode for the past few years has finally come out with their new revolutionary technology that utilizes EHF 60 GHz wireless connectivity to transmit a whole host of connectivity standards without using any cables or connectors. The Kiss Connectivity, as Keyssa is calling it, is essentially a very short range wireless connectivity standard designed to allow someone to touch two devices together and to transfer data across them as if there were a connector or a cable between them.

This is not designed to replace wireless standards like Wi-Fi, WiGig, Bluetooth, or NFC, but rather operate in parallel with those standards in order to deliver a connector-less device. However, this technology does operate at the same 60 GHz frequency as WiGig also known as 802.11ad and is capable of transmitting signals at or around the same speeds as WiGig’s theoretical maximum speeds. Keyssa states that Kiss Connectivity’s maximum throughput is 6 Gbit/s while WiGig’s is 7 Gbit/s but Keyssa has been very clear that they do not consider themselves another wireless protocol since they are designed to simply replace a connector.

Another interesting tidbit about the company is that if you look at the majority of their leadership team and a lot of the advisers, there are a lot of former Silicon Image employees. This is relevant because Silicon Image is one of the companies behind HDMI and MHL, two very prominent but proprietary technologies that require licensing in order to be used. There is no denying that the group of people that Keyssa has assembled are experienced and capable individuals and probably a very strong team. However, it must be acknowledged that Kiss Connectivity is still a proprietary technology and does not necessarily mean that you can get rid of a power connector on your device unless you go with something like Qi or Rezence and if you’re going to put a power connector on your device in the future it will very likely be a USB Type-C connector which also carries data and video. It remains to be seen if anyone is willing to build a fully wireless device, but there’s no doubt that Keyssa’s Kiss Connectivity is the technology that can enable that.

They’re also backed by Intel Capital and Samsung, which lends a bit more legitimacy to their technology even though both Samsung and Intel are already showing WiGig technologies for similar applications (not direct touch point to point). While Samsung and Intel aren’t necessarily showing the exact same technology, they are still harnessing 60 GHz to transfer large amounts of data, be it video or simply files. The end result, however, is the same.