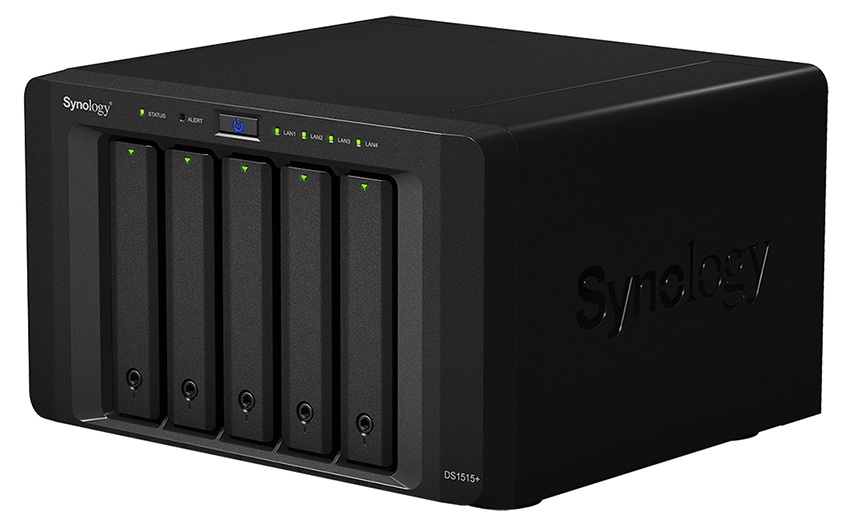 Synology has launched new 5-bay and 8-bay NAS systems aimed at small and medium businesses. The DS1515+ and DS1815+ feature a host of enhancements that include double the number of Ethernet ports, allowing them to hit read speeds in excess of 450MB/s.

While the exterior design has remained unchanged, the DS1515+ and DS1815+ now include Intel’s latest Atom SoC, the 2.4 GHz quad-core C2538, which brings the AES-NI hardware encryption to the platform. The RAM is at 2GB, which can be extended by a further 6GB via two memory slots.

The drive capacity is 30TB for the DS1515+ and 48TB for the DS1815+, although the ability to expand storage through Synology’s eSATA-based DX513 expansion unit means that you can extend overall storage to 90TB for the 5-bay NAS and 108TB for the DS1815+. The four Gigabit LAN ports feature Link Aggregation and are optimized for minimizing failover downtimes.

The addition of new LAN ports is geared at allowing simultaneous connections to the NAS and increasing bandwidth, with Synology quoting 390MB/s for the DS1515+ and 420MB/s for the DS1815+. There are also four USB 3.0 ports at the back for transferring data to an external hard drive. Synology is rolling out its High Availability feature, through which you can configure two NAS units to mirror data among them. One NAS acts as the active server, and the other is a passive system that will kick in if there’s an issue with the active NAS.

Being Plus variants, the DiskStations feature additional options that are not available to regular DiskStation users, which include virtualization environments like VMware, Citrix and Microsoft Hyper-V. Other SMB-oriented utilities include an integrated mail server, central management console for administrators along with Windows AD, LDAP, and Domain Trust. Synology also offers tools for securing and backing up data automatically.