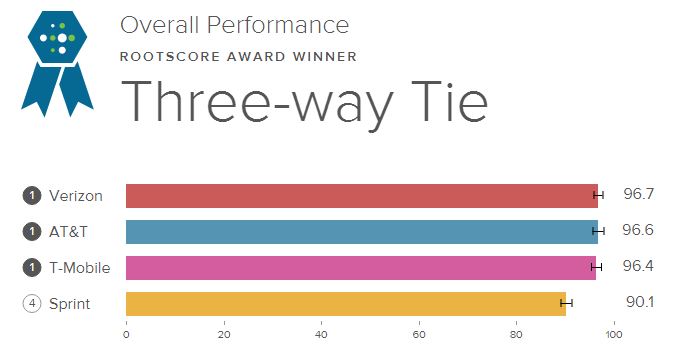 According to Roometrics’ latest data for the second half of 2014, if you are a customer of AT&T (NYSE: T), T-Mobile (NYSE: TMUS) or Verizon (NYSE: VZ) you are going to get about exactly the same experience. However, if you go with Sprint (NYSE: S), you will suffer some performance or coverage issues. That means, when you compare AT&T, Verizon and T-Mobile you can do so knowing that your experience will essentially be around the same in San Diego and that you can buy based on value rather than ‘marketing’ from the carriers.

Traditionally, Verizon and AT&T are the most expensive, with T-Mobile coming in much cheaper, so if you are considering a new phone, you should probably look at T-Mobile before renewing your contract with AT&T and Verizon. Especially if you consider the fact that T-Mobile’s phone selection is just as good as or better than both Verizon and AT&T, even though AT&T does have a lot of exclusives. AT&T’s exclusives, however, can easily be purchased outright and get an unlock code and then you can activate it on T-Mobile. And if you’re happy with your phone and your contract is up on AT&T, you can very likely switch to T-Mobile without any issues and probably save $20-$30 a month, minimum and regain unlimited data, which AT&T doesn’t have.

Unfortunately for Sprint, they seriously lagged in reliability and data performance, which are the two major factors of why their score is so much lower than the rest of the carriers. Even though, if you looked at the scores of all four San Diego carriers you would realize that there really isn’t that much of a difference, even if you add Sprint. But, if you look at the observed data speeds from some of the carriers, there are some significant differences. Perhaps Rootmetrics’ Rootscore needs to re-weight certain factors like download speed more heavily over call quality, etc.

Rootmetrics measures their ‘coverage’ as a factor of reliability and speed, with Verizon, AT&T and T-Mobile tying for reliability and Verizon and AT&T coming in as tied for speed, even though the difference between the three scores is 0.4 out of 100, or less than 1%. It makes you wonder why this wouldn’t be considered a three-way tie. Especially when you look at the differences in speeds.

What we can conclude from all of this, even with a few slight irregularities is that T-Mobile is still the best value in San Diego and Sprint is still the slowest in almost every measurement.