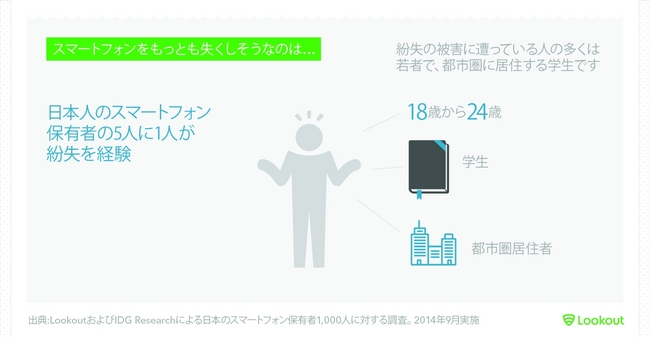 A research survey recently published by the Japanese branch of San Francisco-based security firm Lookout Inc. indicates that Japanese users may actually lose their smartphones quite frequently. The survey revealed that at least one in every five smartphone users had experienced losing their smartphone at one time.

This conclusion made by the survey was based from the data collected from a small sample of about 1,000 users throughout the country. The approximate 23% within the group representing this figure reported having experienced losing at least one smartphone at some point. A considerable majority of the people within the group are users who live in busy cities, and are considerably young, averaging only to about 18 to 24 years of age.

As for where exactly do they lose their smartphones, the most common place was on public transportation mediums, especially on trains and subways, or on facilities and establishments that are near these vehicles. Second on the list was on commercial establishments, such as on shopping malls or market districts. Prefecture-wise, the region with the most users having lost their smartphones was on Okinawa Prefecture (44%).

The issue of lost mobile phones today holds more digital security risks than before, mainly because sensitive and private data are now being frequently and regularly used on smartphones. When questioned about data recovery, the general consensus of the entire sample was that they are willing to pay even 50,000 yen ($424.00), just so in order to recover and secure the lost data.

The data obtained from the survey will be used by Lookout Inc. to provide the appropriate security solutions and applications for future lost smartphones.

Weirdly enough, at least 11% from the entire sample have also reported losing their smartphones, however this group reported recovering their lost phones after a specific period of time.