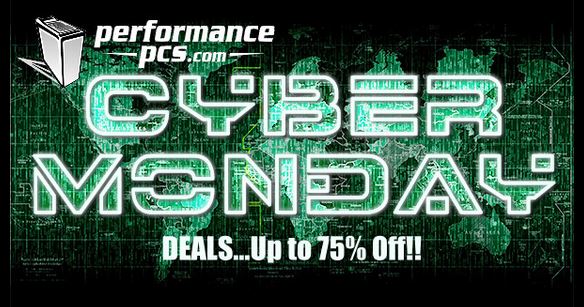 We’ve been scouring the internet for good Cyber Monday deals, and we weren’t particularly impressed with TigerDirect’s nor Newegg’s Cyber Monday deals. Newegg’s deals are merely an extension of their Black Friday deals, some of which were very good deals, but the best deals are simply sold out. Getting beyond that, we’ve been looking for some hidden good deals and I think we’ve hit the jackpot.

Performance PCs is an enthusiast PC website, generally for buying cooling products and cases, however they have expanded their offerings over the past few years and now offer virtually everything you might want to buy for a PC. The real great thing about this deal is that it covers virtually everything they sell on the website with the exception of cases, processors, motherboards and Clearance items. This offer is only available today and offers either 75% off most items on the site or 8% off any order over $50 (not stackable).

For example, if you were to go and buy a Razer Goliathus Fragged Speed Edition in Alpha Large size, then you will pay $6.25 (already sold out) compared to $23 on Amazon. The deals they have are really quite good and span across Bitspower, Antec, Roccat, Enermax, Magicool, Koolance, Razer, Icy Dock, Noctua, Xigmatek, Thermaltake, StarTech, Nexus, Kingwin, Azio, Bytecc and Spire. You will very likely see the best deals on Razer products, which is why they are disappearing so quickly, so act fast.