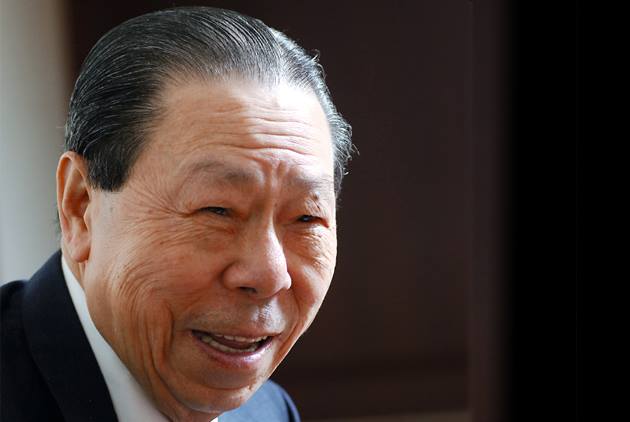 Formosa Plastics Group (TPE: 1301), a conglomerate of diverse interests including biotechnology, petrochemical processing and production of electronic components, is officially entering a new era, in terms of power distribution, after co-founder Wang Yung-tsai (王永在) died at the age of 93 on Thursday Nov. 27.

Wang, as a younger brother of the group’s founder Wang Yung-ching (王永慶), who retired in 2002, helped the group develop its electronic materials business, including the nation’s biggest DRAM chipmaker, Nanya Technology Corp, and the Inotera Memories, which is a joint venture between Micron Technology of the United States and Nanya.

Wang Yung-tsai retired from the group as the vice chairman in 2006, when he handed over the company to seven people, including his son William Wong (王文淵), Wang Yung-ching’s daughter Susan Wang (王瑞華), William Wong’s younger brother Wilfred Wang (王文潮), and Susan Wang’s younger sister Sandy Wang (王瑞瑜). The group officially entered a new phase when these offspring of the Wangs took over the management of the company but the group said that the transition has been carried out for years and nothing will change after Want Yung-tsai died.

In addition to the Wangs, professional managers who are also senior or veteran employees of the group are also involved in the management, the group said.

“Currently, the group has many important ongoing projects,” William Wong said. “We hope that everyone in the group will learn the simple and diligent style and courage of the group’s two founders to accomplish the goals.”

Born in Taipei’s Xindian district, but spending most of his formative years in Chiayi, a city in Taiwan’s agrarian-dependent South, Wang Yung-tsai began his career by founding a lumber company in 1948. He did not pursue any further education after he graduated from high school. He closed his first company 10 years later to help found Formosa Plastics and run it through its first years.

Wang Yung-tsai had an older brother Wang Yung-cheng (王永成) who died of pulmonary tuberculosis in 1944.

Wang Yung-tsai was named as the director for Formosa Plastics’ naphtha cracker, the sixth of processing plant of its kind in Taiwan, in 1993. He became the actual head of the entire group when his brother Wang Yung-ching retired in 2002.

The younger Wang was called “the grand architect” of the naphtha cracker plant in Yunlin County’s Mailiao Township, where the campus also has an oil factory, a power plant and a harbor, because he supervised its construction, which started in 1994, the group said.

The production site generates sales of $48.54 billion (USD) a year. Last year, the group, which employs about 100,000 workers, reported revenue of US$82 million and said that it expected the figure would increase to US$87 million this year.

In 2010, Forbes ranked Wang Yung-tsai as the 10th wealthiest person in Taiwan.

“He deserves my respect with all my hearts,” Sandy Wang is quoted as saying.

She said that Wang Yung-tsai would demonstrate and teach her in person whenever she encountered difficulties at work. Also, Wang Yung-tsai was an easy going person who was on the opposite character as her own father Wang Yung-ching, which also became the reason why she would always called for help from Wang Yung-tsai when necessary.

“Also because of their different characters, the two brothers could always work well together for so many years,” she said.

The new division of power

In the meantime, there are 15 board members for the Chang Gung Memorial Hospital, which also belongs to the group, and five of them came from the Wang Family, including the late Wang Yung-tsai, William Wong, Wilfred Wang, Susan Wang and Sandy Wang. The hospital said that a new chair of the board will be elected within a month, while William Wong is regarded as the most potential candidate.

Among the group, the hospital is the major shareholders of the group’s subsidiaries while it possesses more than 20% of the shares of everyone of them.

The group was established in 1954 and is ranked as the seventh biggest company of its kind in the world with a total daily production of 9,000 tons.

Nanya and New Eastern were merged into a single entity – the Nanya Plastics Corp, and upstream integration was achieved in the 1990s through the construction of an ethylene-producing naphtha cracking plant and a coal-burning power plant.

The group is also involved in business such as textiles, electronics, medicine, skin care, automobile manufacturing, gasoline retail and petroleum refining. Its oversea branches are located in the United States and China, where the group has purchased or constructed many PVC factories and chemical production facilities.

In Point Comfort, Texas, the group owns properties containing over 200 oil wells and lands rich in natural gas, pipeline and production firms and an ethylene plant. In China, the group has a power plant in Zhuangzhou, Fujian Province and at least 40 more factories in the nation.

While Formosa Plastics is a critical part of the global supply chain, consumers are most likely familiar with two of the company’s forward facing brands: HTC (TPE:2498) and Via Technologies (TPE:2388).