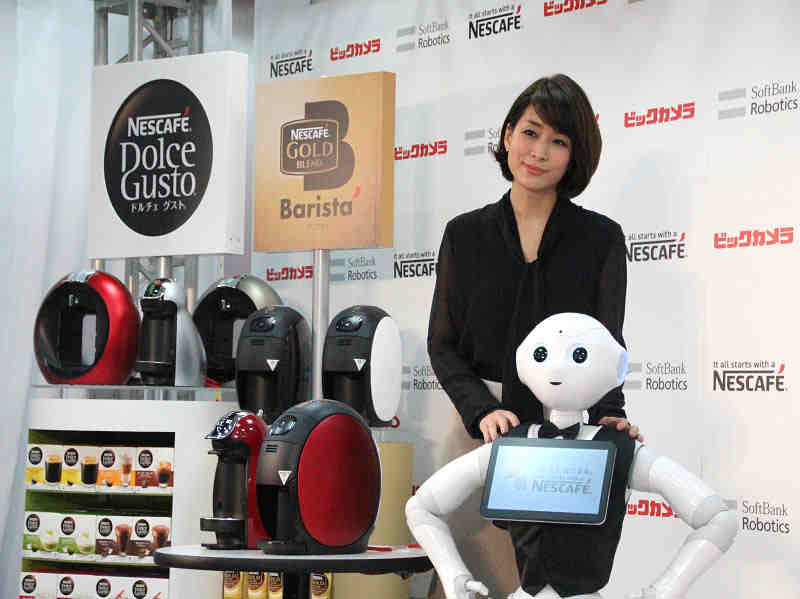 Here is the daily roundup from Japanese consumer tech and tech business websites for December 2, 2014.

Nestle Japan finally launches its project to use Softbank’s Pepper robots as coffee machine guides in Japan. The launch was welcomed with an opening event at Bic Camera’s Yurakucho branch, where the robots would be first assigned on its job.

The company had previously announced its plans to use the social robot Pepper as a guide and interactive machine. The general outline was to use the robot at around 20 consumer tech and electronics centers across the country, with a total of about 1,000 individual units assigned by the end of the year 2015.

The opening event demonstrated the customized Pepper robot’s functions, with the unit conversing with the host speaker about its job and about Nescafe. The unit was even dressed with an obligatory matching outfit, which will also be presumably used as when it finally performs its task as a Nescafe coffee station ’employee’.

The new system will focus on the accurate prediction of data for concentrated solar energy systems. Such off-grid systems usually require vast amounts of meteorological data to optimize any calculated energy output. With the assistance of UNIYSIS and its various energy monitoring systems, the new detection system is expected to be able to analyze collected data from satellites and ground stations more precisely. This would then theoretically enable any concentrated solar energy system to adjust and compensate more easily as long as the detection system stays online.

GDP/DPR, one of the latest launched satellites by JAXA, will play a vital role in the implementation of the new system.

Jupiter Telecommunications (J:COM) announces that it will be ending its digital to analog services, as well as other related services starting next year by the end of January 2015.

Self-advertised as a “comprehensive media company”, J:COM has been one of the longest cable TV and channel operation business provider in the country. The announcement to end its digital to analog cable services is seen as a possible measure for the company to slowly adapt to progressive changes in TV hardware and broadcast protocols due to the introduction of 4K TV.

First prefecture that will be affected by the service loss is the Ibaraki prefecture. The complete cut-off schedule for the service can be found at J:COM’s official website.