In case you missed hearing about the stunt that TGI Fridays was doing for the holidays, the “Mistletoe Drone” was a remotely controlled quadcopter with mistletoe hanging beneath it.

The quadcopter would be flown around the restraunt as a sort of roving kiss-cam.  You know it as that entertaining thing that you enjoy at sporting events, so why wouldn’t you want it when you go out to eat?  The seasonal promo has been jumping around from location to location with success and without incident until December 4th at the chain’s Sheepshead Bay location. The operator had a 10 inch quadcopter that he encouraged a reporter from Courier Life to let land on her hand.  When she flinched after the quadcopter touched down it went careening into the photographer’s face.

Reports say that the operator David Quiones stated that there had been no incidents before and even blamed the reporters.  Though it should be noted that operators of RC aircraft need to be in control of what they are piloting and use the utmost caution to prevent injury to others. A spokeswoman for TGI Fridays said that the prior events had no casualties and dismissed the reporter’s concerns about future injuries.  What is most troubling is the statement of the operator to the reporters, which Quiones said “If people get hurt, they’re going to come regardless. People get hurt in airplanes, they still fly.  There is a risk involved — anything flying, there is risk.” 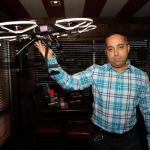 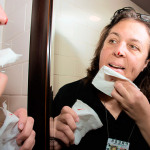 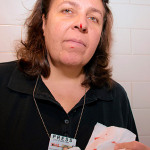 It is amazing that there have not been issues before as flying copters inside that are that powerful is a very dangerous thing to do.  The 23 inch six motor copter that they also use did not have blade protectors for  whirling 5 inch blades when the Courier Life photographed it flying around.  These blades are spinning at very high rates of speed and are very dangerous and should be protected in a situation like this.  It is peculiar since there are photos at other locations that show the same copter with protectors on.  One can only be thankful it was the smaller of the two that inflicted the damage, as the larger one most definitely would have been much more gruesome.