Most American Chamber of Commerce in Taipei’s (AmCham) members are planning to hire more talents and expand their business in Taiwan, with a hope that there can be fewer bumps which are related to political and legal turnmoils, AmCham Chairman Thomas Fann (范炘) said on Jan. 8.

“Most of our members are optimistic with their business for 2015. Most of them believe that Taiwan is a nice place to live and work,” Fann said.

Fann, who is also the president for Ford Lio Ho Motor Co, said that Taiwan is renowned for the environment of security, convenience and well-organized mechanisms such as the nation’s world-class health insurance system. AmCham Chairman Thomas Fann (范炘) quotes the latest statistics and says that most American companies will expand their business in Taiwan. (Photo/Jimmy Chuang)

“Our health system is impressive for many other foreign countries that they would send people to learn from us. Taiwan is a good place that needs to be introduced. The problem is how we could do that to make it more attractive to more foreign talents?” Fann said.

Established in 1951, AmCham currently has more than 1,000 members from more than 500 companies and 27 committees of various industry interests, and the numbers continue to grow. The survey was conducted last November and a total of 245 members participated in the survey.

The result of the survey highlighted that more than 50% of the survey participants said that they expanded their labor force last year, and half of them said that they will expect an increase in employment and investment in 2015. Also, as high as 83% of them strongly support Taiwanese government’s intention to join the proposed Trans-Pacific Partnership trade agreement (TPP), as they believe that it will enhance Taiwan’s growth prospects and avoid economic marginalization and Taiwan is capable to meet high standards of the pact.

Participants of the survey said that they would believe that the best way for the nation to sign free trade agreements with foreign allies is to attract more foreign investments and boost trade by liberalizing its market, while international standards are implemented.

“The pace will need to be accelerated to enhance Taiwan’s chances for eventual inclusion in the TPP,” Fann said. “But whether or not TPP membership materializes, liberalization would improve Taiwan’s ability to compete effectively in global markets.”

Quoting the statistics from the survey, Fann said that most AmCham members would care about the potential turnmoils of regulations, politics and the quality of human resources, including recruiting qualified talents and their capability of innovation.

“A regulation, for example, could be explained differently by the central government and a local government. It will be regarded as one of the ‘risks’ when a company is making its annual plan,” Fann said. “But we recognize the government’s efforts to make things right as fast as possible.”

Lack of human resources, he said, is also a difficulty that many AmCham members encountered as they have been hiring more talents and expanding their business in Taiwan.

“English capability is the major problem,” he said. “I must say, that most Taiwanese talents’ English is ‘not very good.’”

While the language problem for Taiwanese talents was first mentioned by former AmCham chairman Bill Wiseman in 2011, AmCham’s President Andrea Wu (吳王小珍), Marketing and Distribution Committee head Gordon Stewart and Fann all agreed that things are getting better when they were asked whether the situation is going up or down. 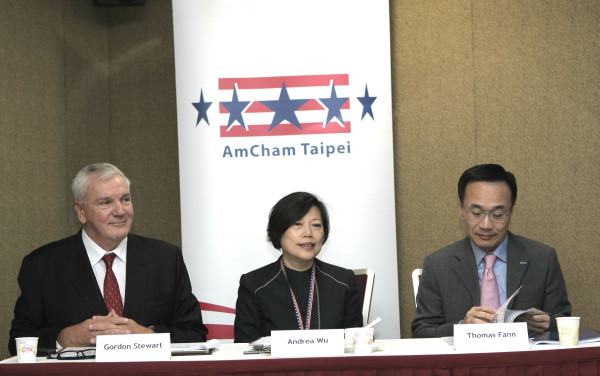 AmCham Marketing and Distribution Committee head Gordon Stewart (left), President Andrea Wu (吳王小珍)(center) and Chairman Thomas Fann (范炘)(right) say that English capability is a major problem for most Taiwanese talents but the situation is getting better during the past four years. (Photo/Jimmy Chuang)

For recruiting talents, Fann said, engineering, marketing, and finance industries have suffered from the most difficulties, now that many Taiwanese talents in these fields were recruited to Hong Kong and Singapore.

“It is my understanding that many companies in Taiwan decide to use English as the ‘company language.’ I think it is a good thing to elevate the capability but the total amount of these companies is not good enough,” Fann said.