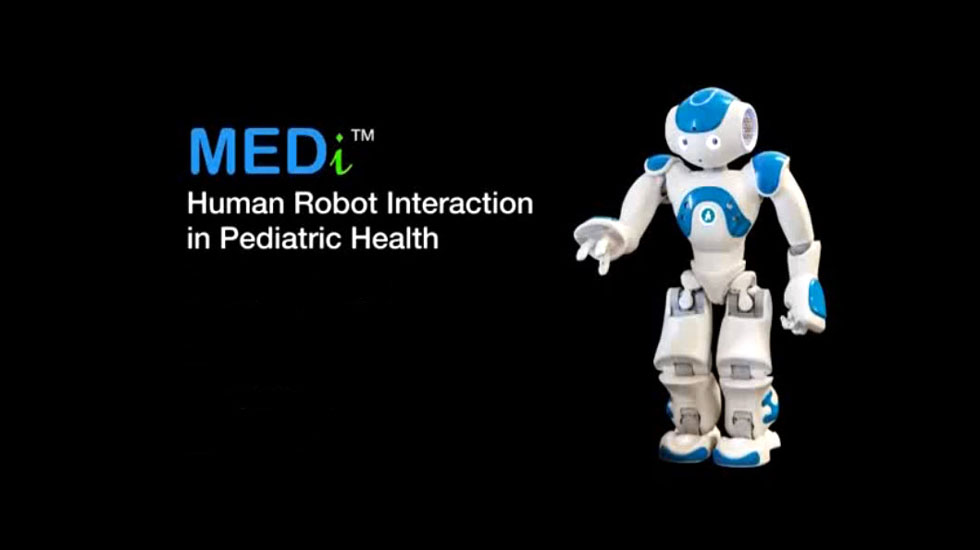 Drugs, kids, and robots seem an unlikely mixture. However, robotics are helping kids through the stress of doctor visits, helping hospitals dispense medications more accurately, and standing in for a surgeon’s hands.

MEDi is yet another of those cute robots that interact with people. You’ll find him in medical settings where his specific task is to be a companion to children, educate them, and be a pain coach. He’ll greet a child as they come for a vaccination or other injection. He explains the procedure saying that the alcohol swab the nurse uses to clean their skin at the injection site “feels wet like a puppy licking your arm”. You can see the interaction between MEDi and a child in their YouTube segment.

MEDi is child height, slightly less than two feet tall. His 25 degrees of movement, eight pressure sensors, nine tactile sensors, two cameras, and four directional microphones make his interactions lifelike. To distract and entertain, he tells stories, plays games and dances. Together with built in cognitive behavioral skills, the robot is clinically proven to reduce children’s pain and anxiety by 50 percent. His explanations help kids understand and anticipate what a procedure will entail. 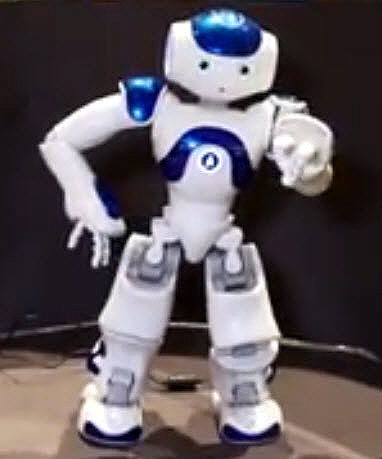 MEDi dances to entertain, but mostly to keep a child’s mind off a medical procedure they may be undergoing.

Rx Robots says their mission is to transform pediatrics through robotics. The Canadian based company first put MEDi to work at the Alberta Children’s Hospital. MEDi’s programs are specific to various medical procedures, such as blood tests or vaccinations. The MEDi Kits which contain an NAO Robot, a battery pack and charger, choreographe software and applications can be ordered individually. The University of Calgary with Setareh Aghel Manesh, Tanya Beran, Ehud Sharlin, and Saul Greenberg are credited with MEDi. Beran was providing information and demonstrating their little guy at CES 2015.

Robots have been used in medical settings for some time. The first in 1985 was PUMA 560 which performed a neurosurgical biopsy. It had only six degrees of movement controlled by six brushed DC servo motors. In 1990, the FDA (Federal Drug Administration) got into the picture, approving the AESOP system  for an endoscopic surgical procedure.

More recent is the da Vinci robot typically used in cardiac valve repair, hysterectomy, and prostatectomy procedures. The surgeon controls the robot remotely from a console. Interactive Surgical, the company behind da Vinci, claims that its 3D high definition vision system with magnification up to 10, special instruments, and computer software help the surgeon operate with enhanced vision, precision, dexterity and control. However, their website warns that “Patients should understand that risks of surgery include potential for human error and potential for equipment failure. To emphasize the potential problems, in 2013 the company recalled the da Vinci units because of defective Hot Shears where cracks allowed electrosurgical energy to leak to patient tissue.

Robotic equipment helps with drug inventory and dispensing as well. Robot-Rx, not to be confused with the child-focused Rx-Robots, is an automated medication dispensing system. Medications are placed in envelopes or cassettes with bar-codes that links to the computer record of the patient. It updates the drug inventory as prescriptions are filled. 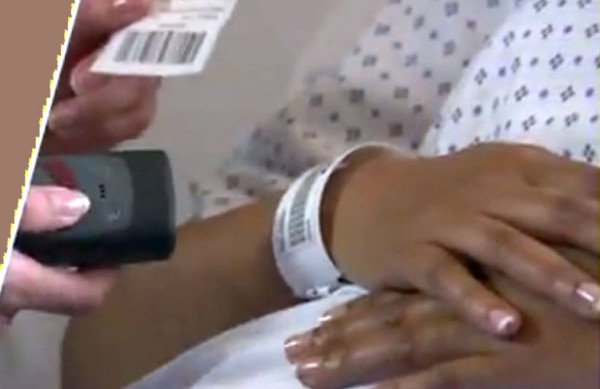 Medicines are stored and dispensed via bar code to the related patient by Robot-Rx.

The vault-like appearance of this robotic system which stores as well as dispenses drugs is far removed from MEDi, the cute humanistic robot.

Whether addressing kids, drugs, or surgery, robots are here to stay in the field of medicine and health care.