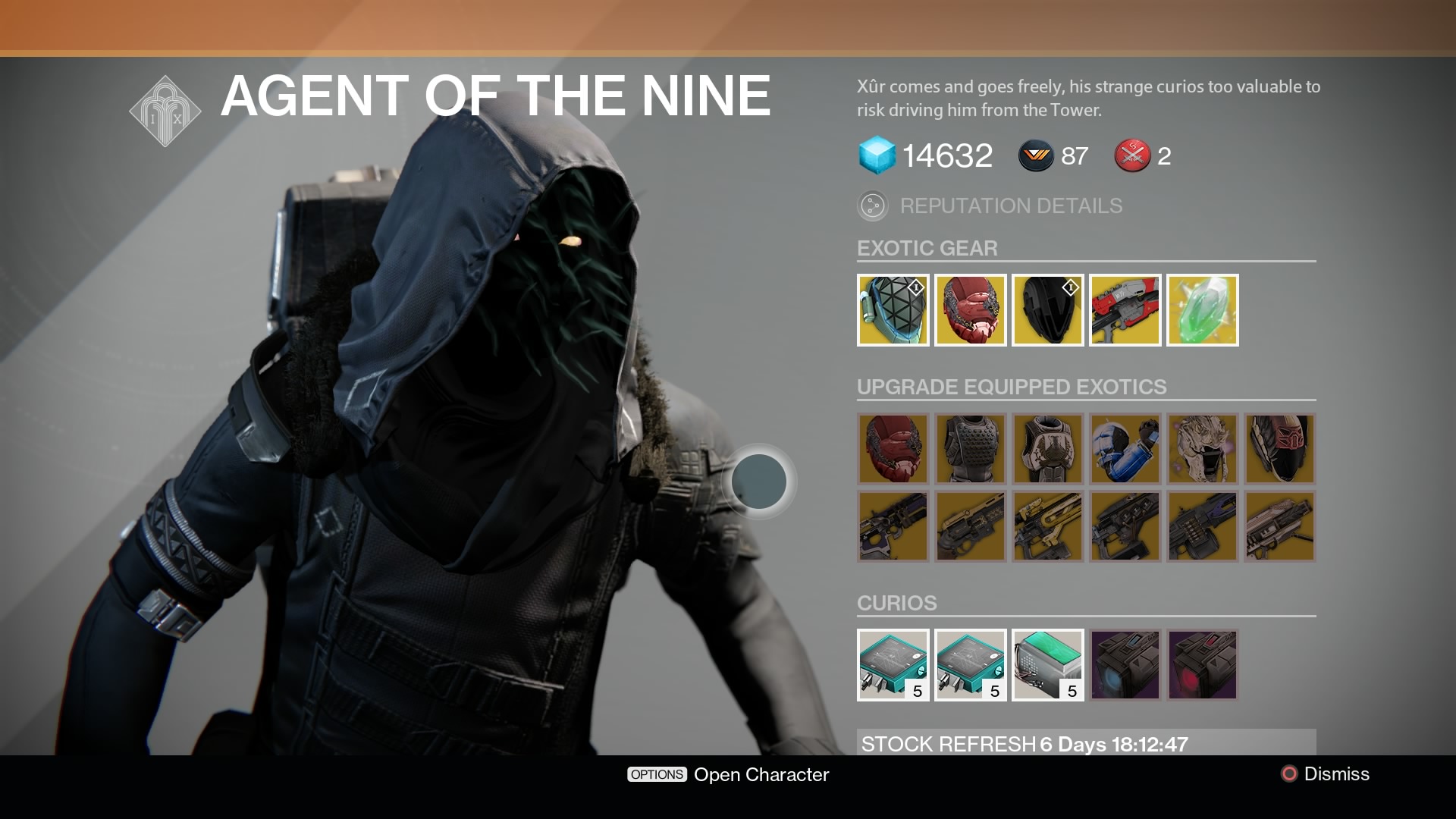 Xur, that fleeting merchant who peddles his exotic valuables across the universe, is back again at the Tower of Guardians with a whole new set of rotated gear.

For Week 19 the sable Agent of the Nine is selling the infamous Ice Breaker, which holds the prestige of being (arguably) most powerful sniper rifle in the entire game. The best part about this fiery sharpshooter is that it literally replenishes it’s own ammunition over time, and it deals incredibly potent damage. All in all this gun is one of the most versatile tools of destruction in the entire galaxy, and remains a must-have for all Guardians.

So there’s no excuse for you not to pick it up.

Xur’s other wares aren’t so exciting. We have three different helms for each class, two of which are Dark Below DLC-only items. We’ve gone over this before, but just in case you don’t know, Xur won’t let you buy DLC-marked items unless you own Destiny‘s Dark Below expansion. 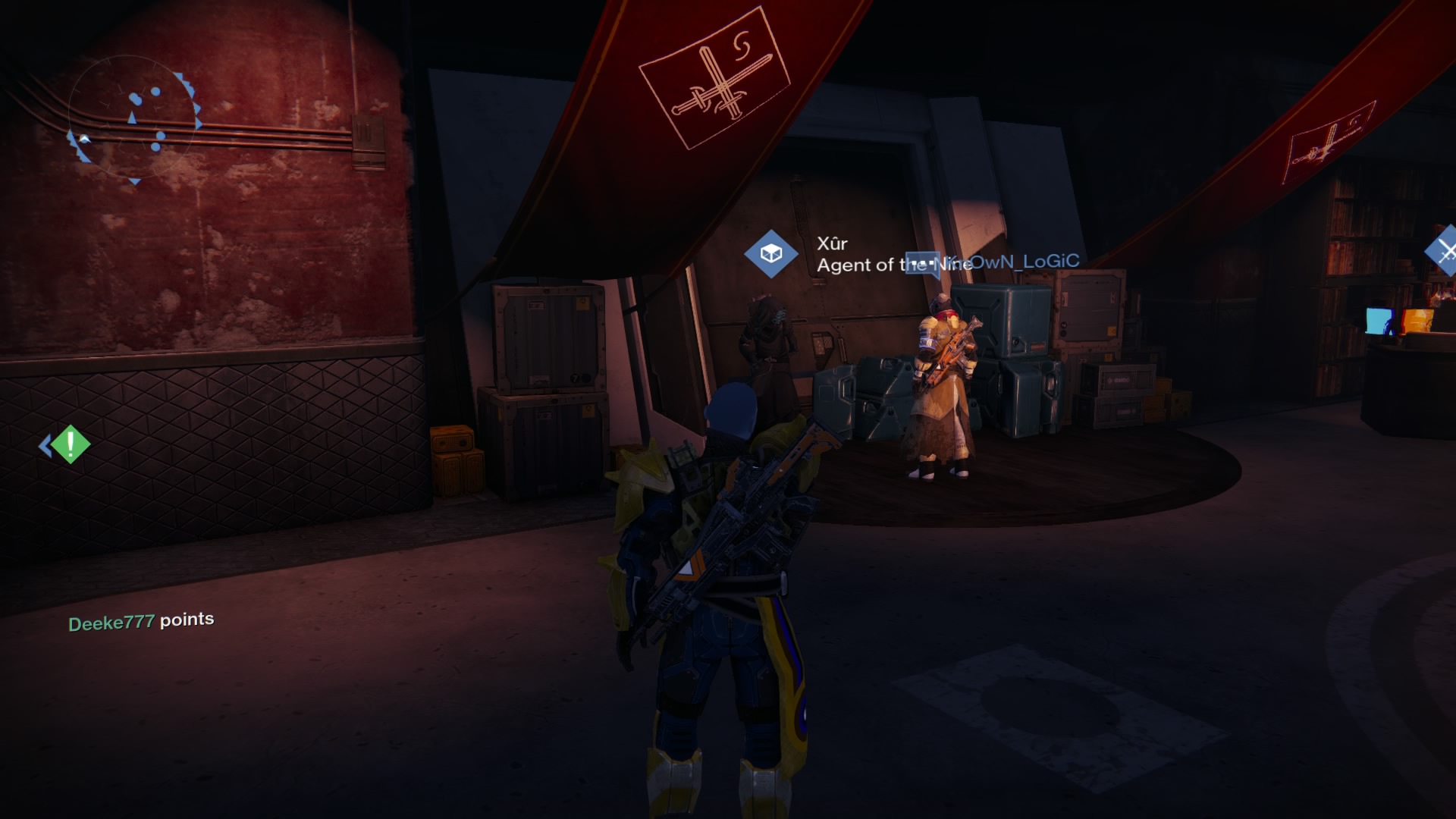 For Week 19, Xur can be found next to the Crucible Quartermaster right at the exit of the stairs.

Furthermore Bungie has done some very lazy work yet again with Xur’s wares. Once again the Exotic engram is missing (no surprises there), but the most aggravating part of Xur’s new inventory is that he’s not selling Heavy Weapon Syntheses (another nasty surprise).

Why is this such a big deal? Since Bungie has announced that Crota’s End’s long-awaited hard mode is coming next week, Guardians need to prepare. And we all know that heavy weapons can boost performance in any given raid.

By not including the Synthesis modules in Xur’s inventory, gamers can’t easily stock up on these necessities. Sure you can always buy them from the Gunsmith at a whopping 950 Glimmer a pop. But since you need all your Glimmer to upgrade armors and weapons at Xur, chances are you don’t have any space currency to spare.

So what’s a Guardian to do? Nothing. We’re up a rather foul creek, without a paddle. Just another week in Destiny, just another instance in Bungie’s laziness.

In any case, below we have a breakdown of Xur’s wares for Week 19 along with an analysis on whether you should buy them or not. 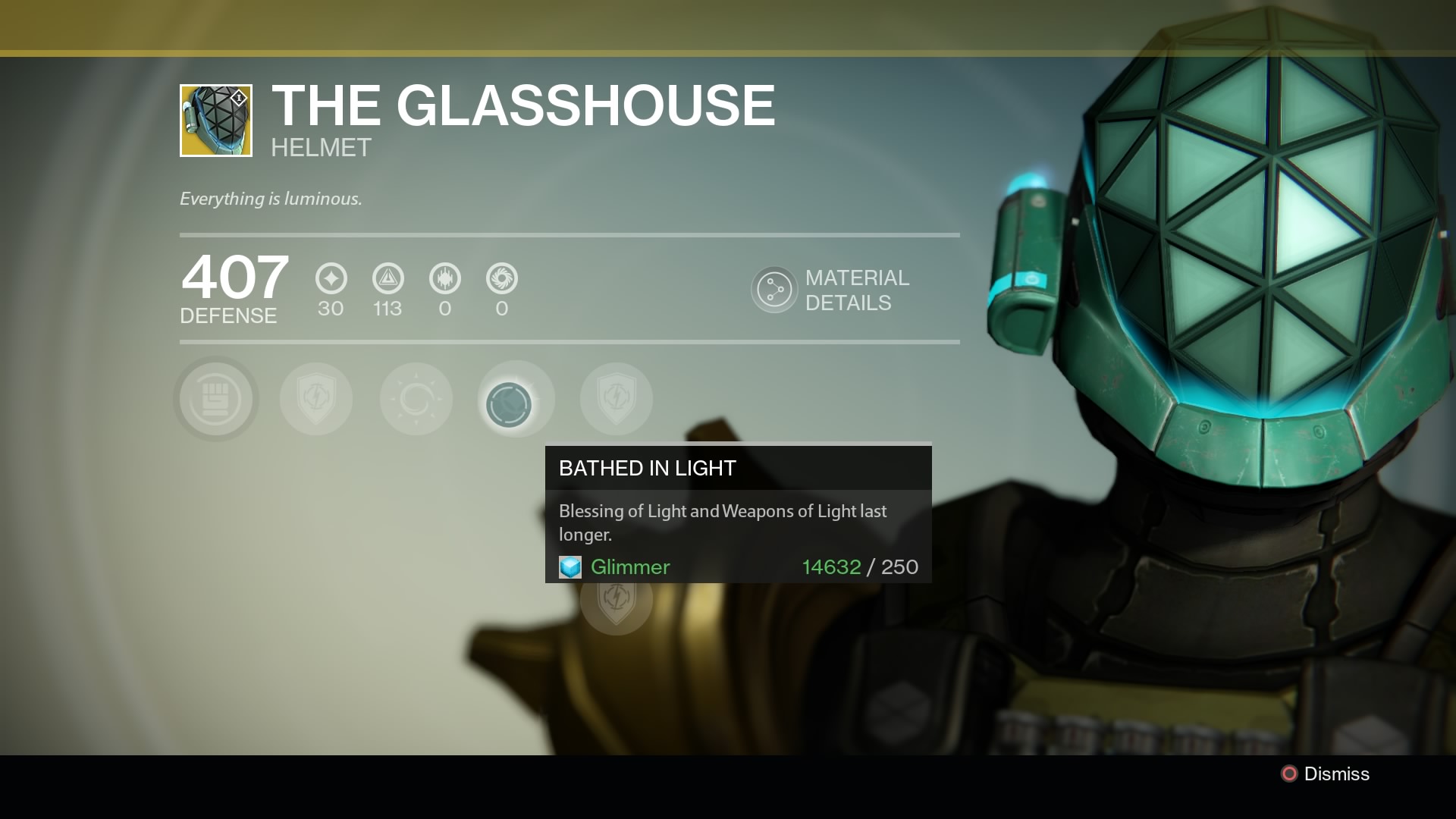 That depends on if you’re a Defender Titan or not. And even still, it’s a yes and no kind of deal. If you have the spare Strange Coins, go ahead and pick it up, as it’s a great utility type of armor.

As a Defender Titan, I’ve used this particular item quite a bit. But if you have the Helm of Saint-14, a nifty exotic helm that blinds enemies who enter your shield dome, you’re not going to really need the Glasshouse.

This item is particular used when Defenders need to spec Weapons of Light, as it’ll make the buff lasts longer, and is very useful to finish off pesky high-level bosses or in PVP where damage is king.

Switching from the Helm of Saint-14 you’ll lose the helpful blinding, but the trade-offs are obvious. Having this helm will make you a more versatile, flexible Guardian that can help out your team in various ways during Strikes, PVP, or Raids.

Are you a hunter? Do you not have this item yet? If you’ve answered yes to both of these, then you should absolutely shell out your Strange Coins for this helm.

The Achlyophage Symbiote is one of the most powerful helms for any hunter, specifically because it gives you an extra shot with your Golden Gun. This is one of the most devastating special skills in the game and can often decimate foes across the board, whether it be treacherous bosses or fellow Guardians in PVP.

And since the Iron Banner is back up, what better time to flex your competitive muscles than now? This helm will give you a nice edge against your opponents.

Also this is a very good roll, with 104 base Discipline, so pick it up if you don’t already have it. 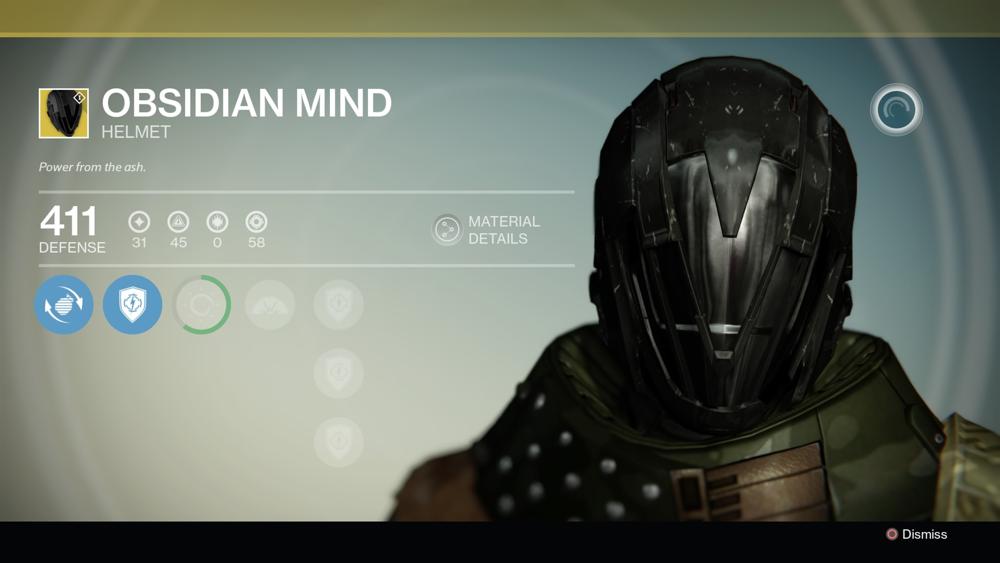 “Power from the ash.”

If you’re a Warlock in the Voidwalker subclass, then yes, you definitely need this helm for one key reason: Nova Bomb.

This special is incredibly powerful and can annihilate whole groups of enemies in every mode of play. Although it takes a bit of time to get used to–aiming is a bit tricky–Nova Bomb is exceptional in its capacity for utter destruction. It’s an AoE-type attack that’s best used against clustered baddies, and as you could expect, deals massive Void elemental damage in a specific radius.

Use this helmet in conjunction with the Voidwalker’s Soul Rip talent and Bad Juju to drop tons of Nova Bombs for optimum chaos. 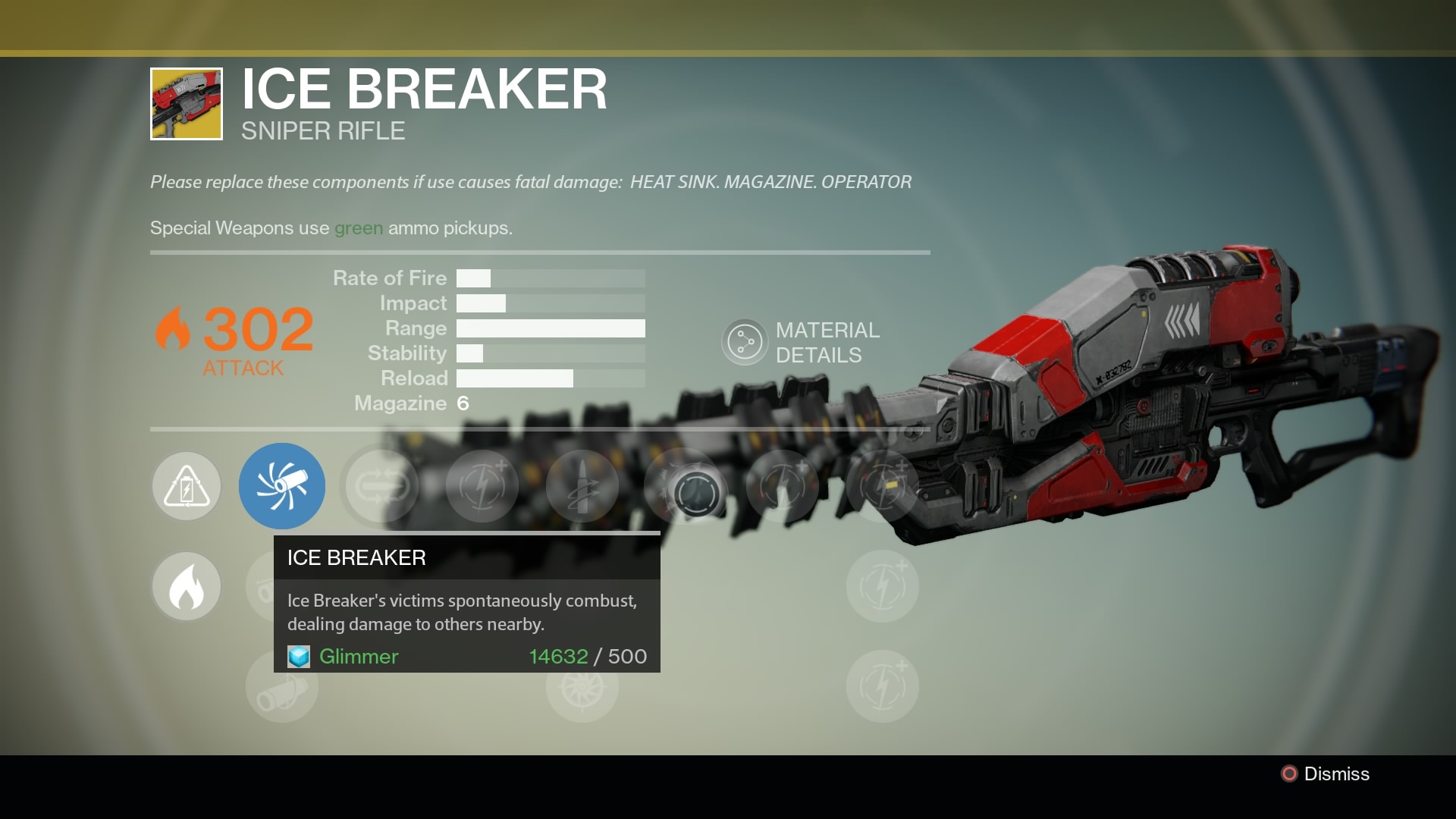 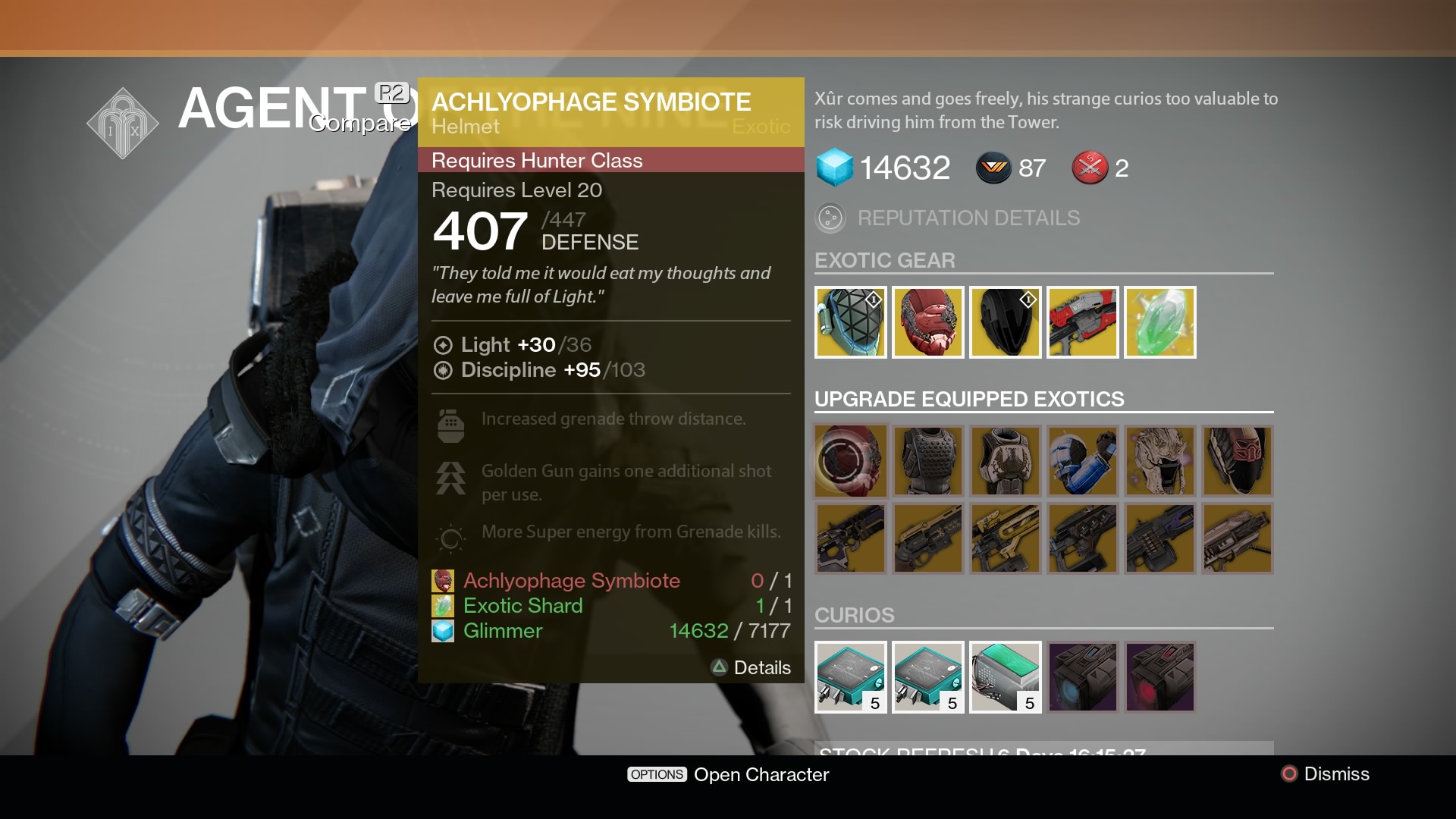 Below we break down what exotic armors that Xur can upgrade for Week 19, and whether or not you should actually invest in them or not. Some of these rolls are pretty bad in terms of randomized stats–Xur’s gear is fully randomized in terms of their boosted stats and upgrade materials.

Check below if these upgrades are actually worth the time and Glimmer it takes to fill out their spec trees. Sometimes you’re better of just saving your Exotic Shards, Strange Coins, and more importantly, your time.

This is a bad roll. Avoid this one at all costs.

Nice Intellect roll here, and this armor works great in tandem with the low-ammo Pocket Infinity fusion rifle, and even synergies with the Vex Mythoclast, which is technically a fusion rifle.

Lesser roll than we’ve seen in the past; you’re better off passing on this one.

Bad stat roll here again, so pass this up. The whole purpose of upgrading your gear is to actually boost its effectiveness. Hold out your Exotic Shards unless you have Coins for days.

Stellar stat roll here, but you’ll want to grab the Obsidian Helm over this one. Pass it up for now.

Icky stat roll and honestly this helm has no real benefits for Warlocks. Avoid it at all costs. 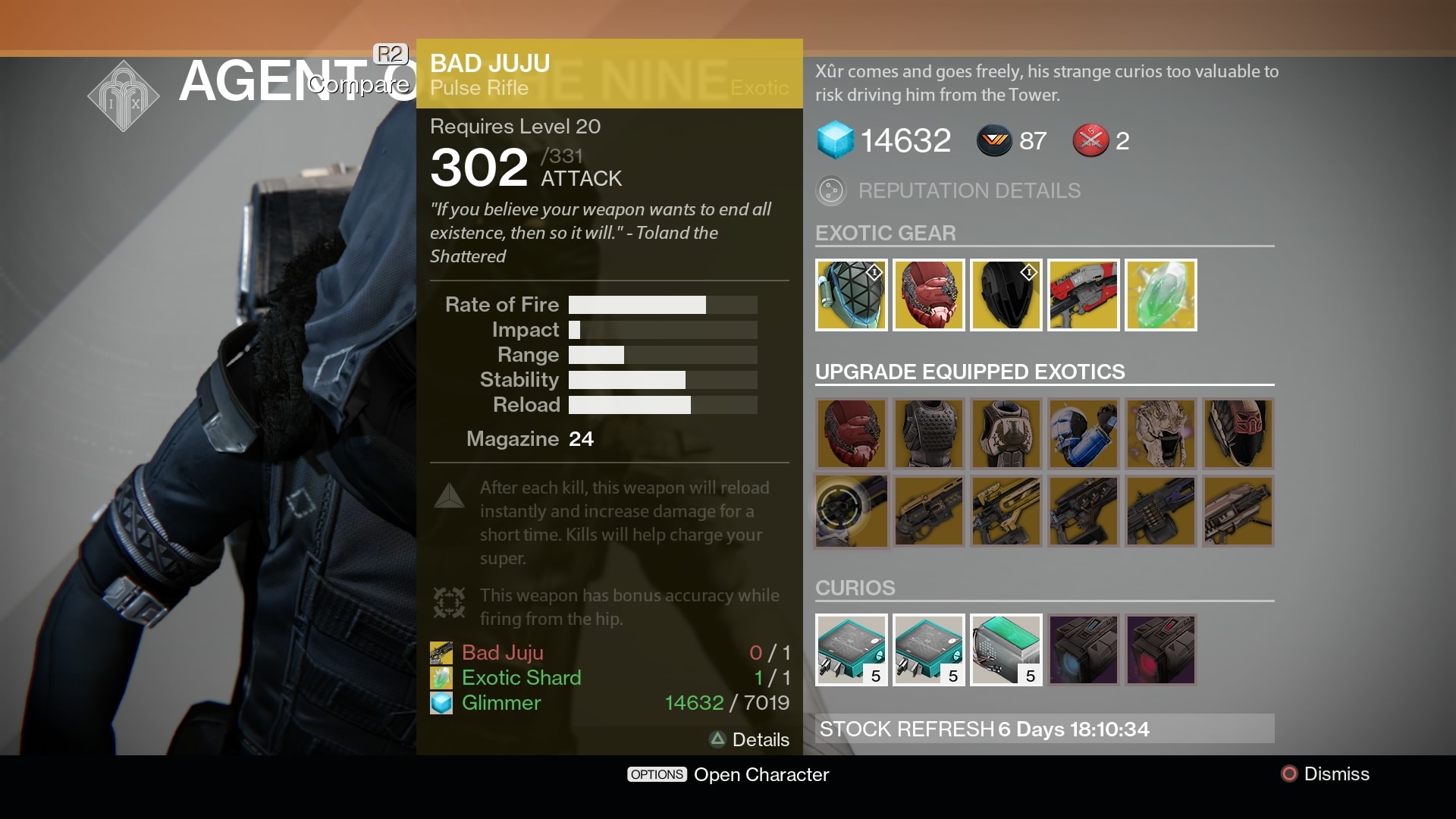 This week’s exotic weapon upgrades are phenomenal, giving some incredible boosts to some already incredible guns. The Pocket Infinity, one of the most powerful fusion rifles in the game, is up, along with Plan C and Gjallarhorn. If you have a ton of Strange Coins sitting around pick up a bunch of Exotic Shards and cash in for some high-damage exotic guns.

A lot of these guns synergize quite well with the upgraded armors: Plan C and Pocket Infinity go incredibly well with Lucky Raspberry, and Bad Juju naturally compliments the Obsidian Mind helm for Warlocks.

As we’ve seen in the past, Xur had 2 primary weapons, 2 special weapons, and 2 heavy weapons for upgrades.

A great weapon to have for Voidwalker Warlocks, especially when using Obsidian Mind. The boost in super energy helps you generate more Nova Bombs, which will be your main DPS output.

Plan C is one of my personal favorite fusion rifles. It’s powerful, dependable, and utterly wrecks Fallen as well as the new Hive Knights/Wizards with Arc shields. The best part about the gun is that it’s fast-firing thanks to its high Charge Rate, which is very important when considering a fusion rifle.

A fantastic choice for a machine gun, and devastating when Arc Burn is on for Nightfall Strikes. With the help of its mods the gun becomes more accurate and actually reloads faster after kills, reducing one of the most annoying aspects of this type of heavy weapon.