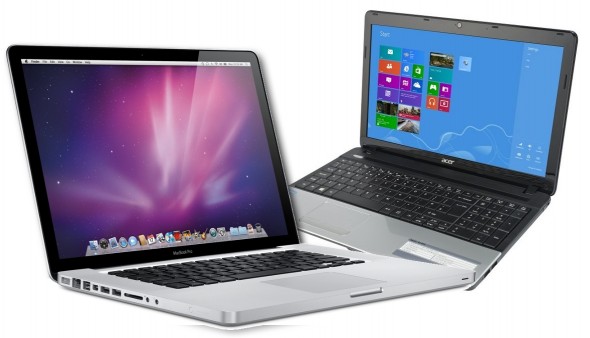 Apple (NASDAQ: AAPL) and its Taiwan rival Acer (TPE: 2353) finished its fiscal year of 2014 with similar number of shipments for laptops, TrendForce said in its latest research.

Last year, Apple posted a spectacular 46.4% annual growth in laptop shipments, owing to its price-lowering strategy for its MacBook laptops, which resulted in a takeover of the mid-range and premium market segments, TrendForce said.

The high growth boosted Apple’s global market share to 9.3% in 2014, vaulting the company into sixth place in the global rankings, one spot behind Acer, which had a 10% market share.

Acer depended on its remarkable performance of its Chromebook laptops to maintain its shipment volume in the market. Although there was no significant rise in Acer’s total shipments, the company managed to slow its slide, dropping only one place in the global rankings last year, the research firm said.

Meanwhile, Taiwan’s Asus (TPE: 2357) expanded its global market share to 11%, leaping into fourth place in the rankings.  Its performance was attributed mainly to the success of its 10.1-inch, 2-in-1 model T100 laptop, which accounted for over 10% of the company’s total shipments in 2014.

TrendForce said that global notebook shipments in 2014 totaled 175.5 million units, up by an annual 3.6%, boosted by the replacement of the Windows XP operating system and the promotion of low-priced notebooks by Microsoft (NASDAQ: MSFT).

“In 2015, the laptop market will only be able to maintain the same overall shipment level as last year, and the growth of some brands will come at the expense of others,” said Caroline Chen (陳虹燕), assistant research manager for TrendForce’s WitsView.

She forecasted that HP and its major rival Lenovo will continue to hold the top two spots this year, while the competition will remain tight between the third and the sixth places.