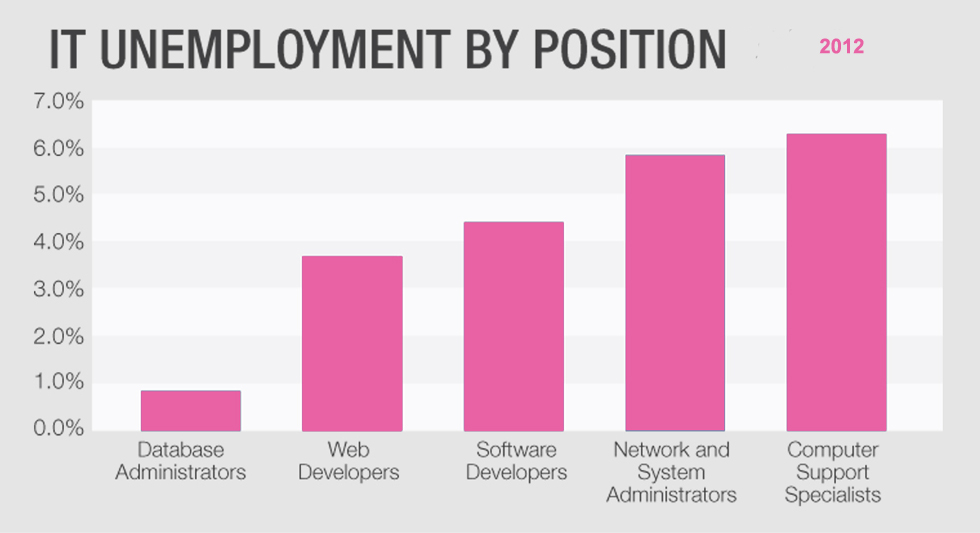 Job seekers, Rejoice. While unemployment tries to recover from stagnation, the IT industry has a bright outlook. CompTIA, a professional IT certification company, predicts a worldwide expansion in the industry of around five percent with only Canada and the UK lagging behind.

Companies are understaffed already in the technology department and 70 percent of managers report they expect to have a shortage of IT professionals to draw from to fill the gaps. The CompTIA report pegs unemployment in the IT industry lower than that of other fields nationally. In 2012, the Bureau of Labor Statistics averaged the unemployment rate for technology professionals at 4.4, about half the national average at that time. The image breaks that down by position. The picture hasn’t changed much.

A shifting environment due to acquisitions and mergers adds to the complexity of staffing. Not surprisingly, top on the list for growth are areas that make headlines: cloud computing, mobile, and as indicated by events such as Anthem Blue Cross’s hack attack, security. Established entities with familiar names have cash flow to entice employees with salaries and uncommon benefits that go beyond such traditional subsidies as health insurance.

If you plan to go job hunting, you might want to arm yourself with some hardware and software skills. That’s what companies continue to search for when interviewing applicants.