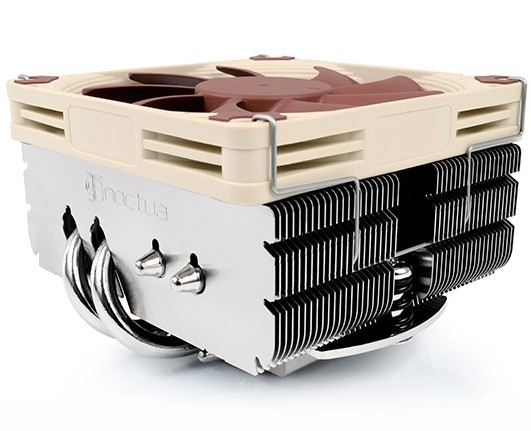 The NH-L9x65 is aimed at offering much better performance than its predecessor, the NH-L9i. WIth mini-ITX motherboards now facilitating powerful processors, there is an increasing need for CPU coolers that offer an ample amount of cooling in a small form factor. The NH-L9x65 fits the bill in that regard, with the 51mm tall cooler featuring four nickel-plated copper heatpipes for efficient heat dissipation, which is aided by an NF-A9x14 fan.

The 2500 RPM fan is quoted to run at a noise level of 23.6 dBA. Although the presence of the fan raises the height of the cooler to 65mm, Noctua has retained the 95 x 95 footprint with the NH-L9x65 as well as full compatibility with PCI-Express devices and RAM modules, which is crucial in a segment where space is at a premium.

The NH-L9x65 features Noctua’s SecuFirm2 mounting system for both Intel and AMD motherboards, and comes bundled with the NT-H1 thermal compound. While several of Noctua’s offerings are aimed at the overclocking segment, the brand has mentioned that the NH-L9x65 is ideally suited for CPUs that do not exceed a TDP of 84W. The CPU cooler will be making its way to retailers later this month, with prices starting at $52.90.

Also announced with the NH-L9x65 is a new PWN fan called the NF-A6x25. The 60mm offering comes with the new SSO2 bearing, delivers fully automatic speed control through the 4-pin fan headers, and has a Low-Noise-Adaptor to reduce the maximum speed during from 3000 to 2300 RPM. The fan will retail for $17.90.