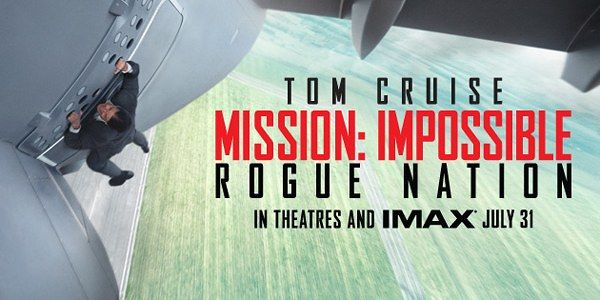 After four successful entries in the franchise, it’s time to reveal yet another showcase of spy stuff, gadgets, vehicles, characters, technology and explosions, all wrapped into approximately two hours of great fun.

Mission Impossible Rogue Nation heads to theaters on July 31st. It will feature Tom Cruise playing the lead role, the Ethan Hunt man of danger, spearheading the Impossible Mission Force (IMF) which was disbanded and neglected by vengeful Washington bureaucrats such as the CIA chief.

The plot revolves around Hunt and his team of spies (Jeremy Renner, Simon Pegg, Ving Rhames and newcomer Rebecca Ferguson) taking on the secretive and shadowy organization called the Syndicate, lead by the yet even more shadowy type of a main character – played by Sean Harris (we don’t know his character’s name for now). The trailer is actually a teaser for a trailer that will be released later today.

The release date for Mission Impossible: Rogue Nation has been pushed forward by a few months. The movie was supposed to be released on December 25th but that would battle the new installment of Star Wars saga, creating a rather difficult situation for both movies it seems. The July 31st timeline is fine by us though! It gives this summer yet another blockbuster to look forward to. Check out the trailer below.

UPDATE – Full trailer has been released, check it out down below. Enjoy it!