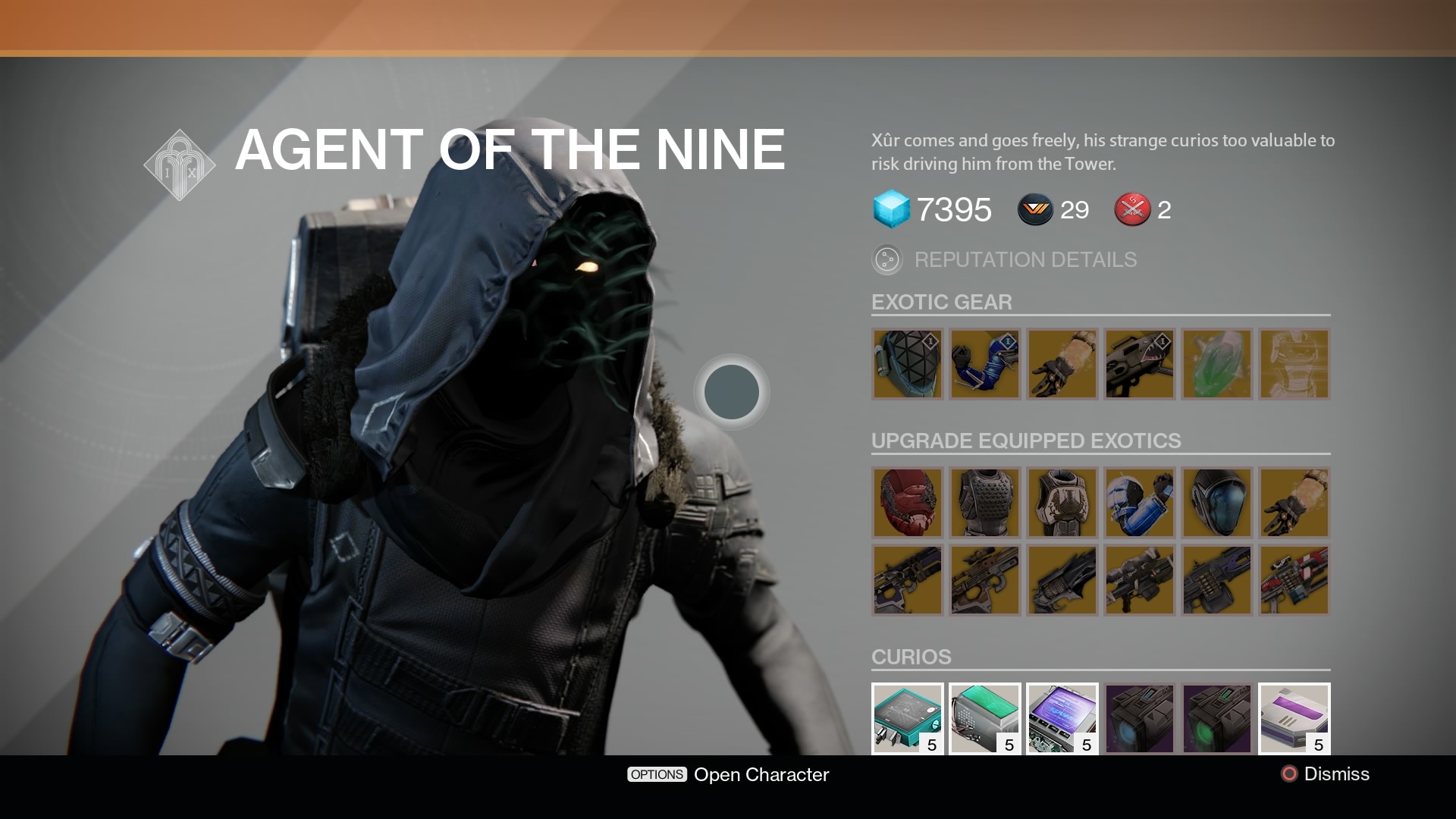 The shadowy merchant Xur is back again with a fresh batch of exotic wares to peddle in Destiny‘s Tower of Guardians, and he really doesn’t have anything too exciting this time around.

Notable selections from the Agent of the Nine’s weekly inventory include a decent Defender Titan helm, a body armor exotic engram that could drop a Heart of the Praxic Fire for your Sunsinger, and a fantastic Achlyophage Symbiote upgrade with 127 max Discipline.

Other goodies include a decent Crest of Alpha Lupi Titan variant, as well as a ton of weapon upgrade repeats like impressive combo Bad Juju pulse rifle and the Arc-infused Thunderlord machine gun.

As far as location, for Week 30 the interstellar tradesman can be found in one of his usual haunts outside of the Speaker’s quarter. 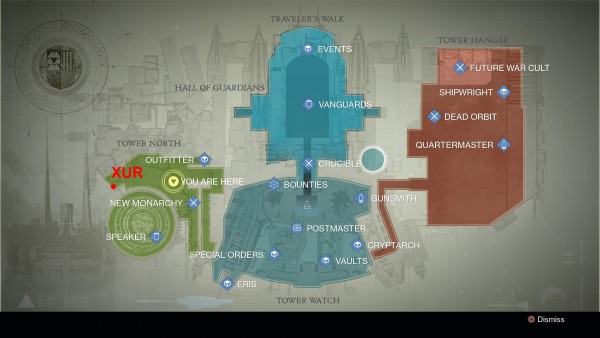 This week Xur is in the western quadrant of the Tower, outside of the Speaker’s quarters next to the railing.

It looks like Heavy Ammo Synthesis are here to stay, priced at their usual exchange rate of 1SC per stack of five. As far as Telemetry models go, Xur has Pulse Rifle, Fusion Rifle and Rocket Launcher EXP boosters up for grabs for 1SC per five-stack.

Without further adieu let’s jump right into our analysis of Xur’s exotic wares for April 3 (Week 30) and find out if his wares are worth your hard-earned strange coins or not. 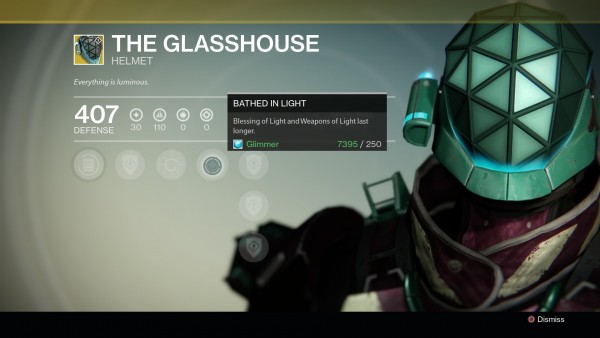 Yes, if you’re a Defender Titan.

The Glasshouse is a very useful utility-grade exotic that serves a very specific purpose: to boost your Weapons of Light for extra damage. This is particularly useful during raids like the Vault of Glass Aetheron battle or high-level Strikes where high-output damage is key.

The Quintessence Transfer mod is pretty useful too especially if you have the Magnetic Grenade equipped. Basically you’ll get something extra out of kills you’d already be getting thanks to the grenade, and get to use your shield more often.

It’s something that every Defender Titan should have in their arsenal, but it doesn’t replace the Helm of Saint-14 for everyday use. The higher-end Intellect roll is also a nice touch that further boosts your bubble shield recharge. 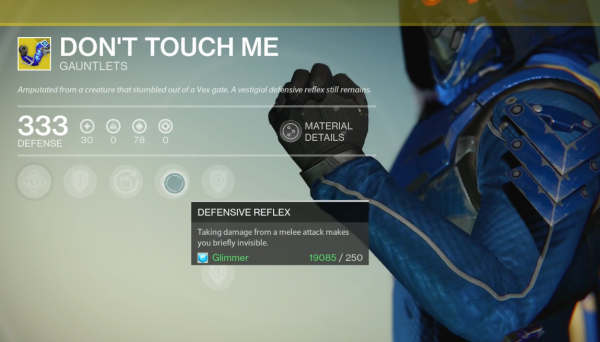 “Amputated from a creature that stumbled out of a Vex gate. A vestigial defensive reflex still remains.”

These pair of gauntlets are strictly PVE, so it depends on what kind of character your Hunter is. That being said, this particular exotic is incredibly useful during the first segment of the Crota’s End raid where you’re running blind for the lamps.

Basically every time you get smacked by a Thrall you turn invisible, which pretty much allows you to keep gaining ground without taking too much damage. And considering how many thralls there are to hit you, the part becomes pretty easy to just sneak past.

But Don’t Touch Me aren’t useful as a main item–they’re not going to replace your Mask of the Third Man or Golden Gun-adding Achlyophage Symbiote. 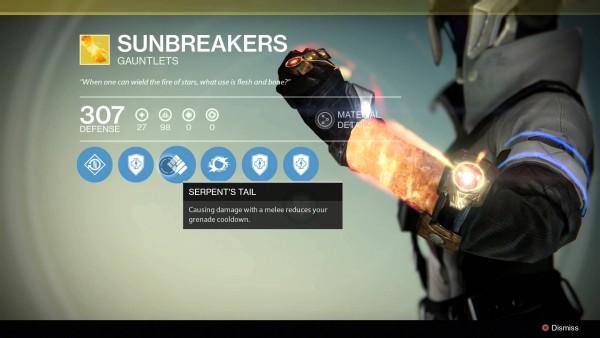 “When one can wield the fire of stars, what use is flesh and bone?”

Maybe, but there are better Sunsinger class exotics.

The Sunbreakers are good gauntlets for the Sunsinger class, but you have better options like the Heart of The Praxic Fire which makes Radiance incredibly potent. Another better option is the Claws of Dire Ahamkara gauntlets which grant you an extra Scorch charge, meaning you’ll get two opportunities to trigger your Flame Shield.

The Sunbreakers are pretty much a tier three item, and they’re okay, plus the stat roll is in the middle so if you don’t have anything else, go for it. Otherwise keep on the look out for those other items and stick with what you have for now. 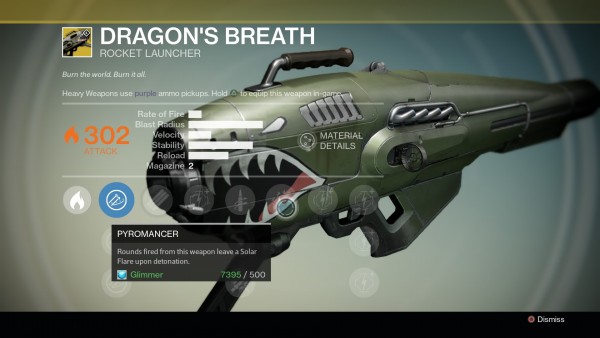 No, save your coin.

The real downside with Dragon’s Breath is that it takes up your exotic weapon slot for a very conditional type of weapon. This rocket launcher is primarily used as a “area denial” solution by leaving a Solar Flare (just like the Warlock’s ability) which delivers damage over time in a specific area.

In PVP you can use it to shoot at an area you want enemies to stay away from, as the explosion leaves behind that damage-dealing flare, pretty much cutting off that particular pathway.

This rocket launcher is curious, and is more for strategic use rather than total annihilation, but it does have a huge blast radius. 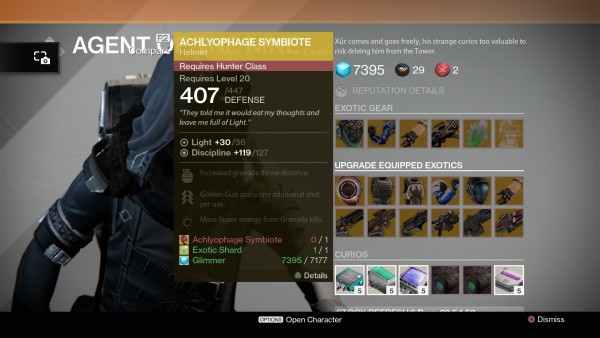 Stellar upgrade here, buy this one if you’re in the market for an upgrade. Achlyophage Symbiote is amazing for all Gunslingers, as that extra Golden Gun shot helps in every single game mode, from PVP to PVE. The extra shot is a constant source of recurring value.

Lower Intellect stat roll, so pass it up. The Lucky Raspberry is a very useful tool that arms you with more rocket and fusion rifle ammo (works with Vex Mythoclast) for PVE raids. Plus you instantly spawn with full grenade energy in PVP. And your Arc-infused grenade’s chain lightning effect stretches further outward, making it a good PVP finisher.

Proper high Intellect stat roll, so upgrade it if you have the extra shard laying around. The item’s worth is conditional, but spawning extra orbs can help out in boss fights as well as taking down Crota on Hard difficulty.

Middle tier Strength roll here, so pass it up for now. You don’t want to invest the Exotic Shard and Glimmer cost until you see a fantastic Strength buff. No Backup Plans are pretty useful for Defender Titans, and stack with defense melee skills to make the Force Barrier overshield a powerful extra line of defense.

The stat roll here is decent, but with a registered max of 128 Discipline, this particular RNG helmet isn’t anything amazing. The Apotheosis Veil is another conditionally useful item that is best equipped during Raids or other high-stakes activities. It allows the wearer to regenerate health from various triggers.

Another “meh” roll here, so save your Glimmer and shards. We’ve already weighed the value of the Sunbreakers above, and the extra defense boost isn’t worth the cost. 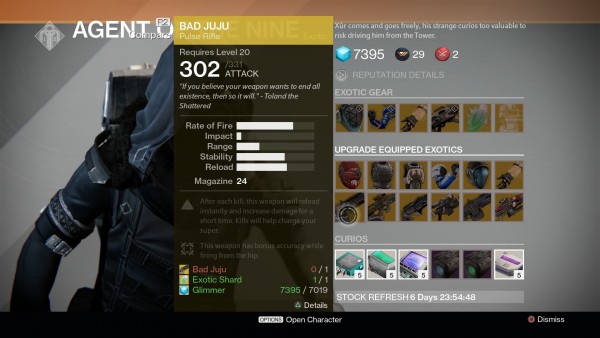 Bungie has just buffed up Pulse Rifles quite a bit in 1.1.1 so now’s a good time as any to upgrade. Bad Juju on its own is pretty damn effective and is a great go-to weapon for Voidwalker Warlocks when used in tandem with the Obsidian Mind helmet. With this combo you’ll get instant reloads and build up your super after kills, and gain more energy from killing Hive enemies thanks to the Obsidian Mind.

You can also use Bad Juju effectively with the Skull of Dire Ahamkara to build some serious super energy.

Upgrade this one. The MIDA Multi-Tool is already amazing, and with extra damage it becomes even more amazing. Essentially it’s a fast-shooting, fast-reloading mid to long-range rifle that empowers you with extra speed when equipped. And the best part is that it gives you a Third Eye that lets you see your radar when you’re scoping down the sights.

Pick this upgrade up. Even when it’s not upgraded Thorn is a very powerful weapon. Sure it’s not as good as the all-star Hawkmoon, but it does the job quite well thanks to its lingering damage and Send It perks. The extra damage is well worth restarting all over again.

Great opportunity to get that extra damage buff on an already amazing machine gun. The Thunderlord is a great go-to weapon in PvP or during Weeklies when Arc Burn is up, and is one of the best heavy machine guns in the game because it packs a powerful punch as well as retains accuracy.

Essentially it combines everything you’d want to see in this type of weapon: power, speedy reloads, and amazing stability. Plus the Lightning Rounds perk makes the gun become more accurate the longer you fire it. Win-win.

Apart from the Arc-infused Thunderlord, Super Good Advice is Destiny‘s other badass machine gun. It returns missed shots to its clip with the Super Good Advice perk, deals bonus damage every time you kill an enemy, packs a Solar-powered wallop, and can reload amazingly fast. 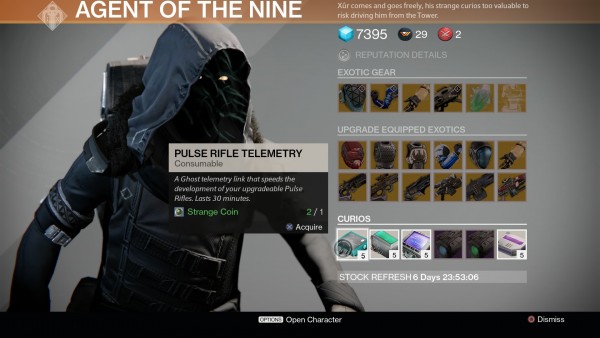