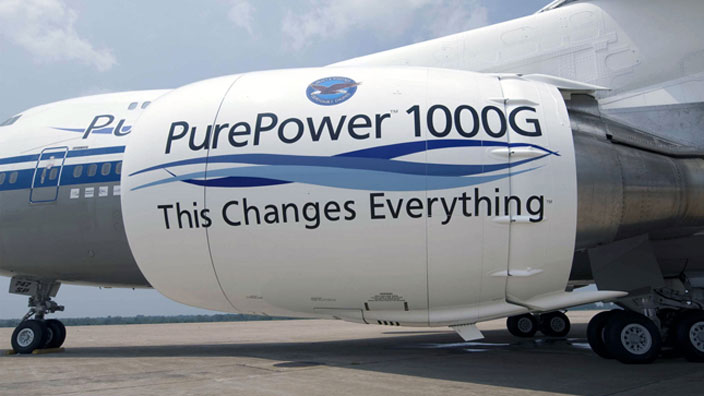 In order to increase efficiency, reduce mechanical wear and enables quicker servicing, next generation of jet engines from Pratt & Whitney will significantly change the way how airplane engines are managed. Its next gen jet engine scored a lot of design wins and became the ‘weapon of choice’ for both Airbus and Boeing’s next-generation of narrow body planes, A320NEO (New Engine Option) and B737 MAX.

Matthew Bromberg, president of aftermarket business for Pratt & Whitney recently stated that “On average, it takes ten people to manage a single engine and through analyzing data on the engine and providing all the feedback to the customer that’s necessary they can go down to a single person.”

How are they going to do that? Well, their PW1000G Family of Engines is not the first, but is the bestselling Geared Turbo Fan (GTF) jet engine, and its major characteristics are reduced noise and reduced fuel consumption. This was achieved by using ‘artificial intelligence’ that predicts the demands of the engine and adjusts thrust accordingly. Key to making such engine work was installing a large number of sensors – over 5,000 of them. Its predecessors, PW6000 and PW8000 had less than 100 sensors.

These five thousand sensors create an astounding amount of data, 10 GB/s per engine. That is 1.02 Tbps, or 2.04 Tbps for a typical twin engine such as Airbus 320NEO or Boeing 737MAX. For comparison, a Formula 1 car produces around 1.2 GB/s (12.28Gbps), and current batch of P&W plane engines collects data in low Megabits, not Terabits per second.

P&W estimates that their needs for data streaming will reach 12PB each year, which will require the company to significantly invest in data centers and supercomputing ability on its own. In order to address this, P&W partnered with IBM. “IBM is building a new infrastructure for us and its great [for us],” as P&W expects to see IBM linking their data centers with research facilities and universities for a greater access to real-time engine operations than ever before.

Time will tell how will this migrate to P&W’s maintenance business, which is changing (as the whole MRO on Wikipedia is). The current era of BTO (Build-to-Order) and SWO (Service-When-Ordered) models is being evolved into customers paying for their engine time just like you pay Amazon for compute time – ‘pay-by-the-hour’ SLA (Service Level Agreement) – where airlines will pay the jet engine manufacturer a fee for the specific number of hours they want to have their engines running. For example, utilizing sensors will enable airlines to modify SOP to the point of where one engine will be shut down as the aircraft vacates the runway, all in order to save fuel. Once you no longer have to worry about the cost of maintenance because your crews shut down one engine or another (as SLA clearly mandates engine availability).

Privacy issues are another thing, since the question is do you want, as an airline – to allow your competitors to know what your hours and burn rate is, checking to see which pilots are most efficient (HR poaching opportunities ahead?), but it is where the trends are going.

At the end of the day, all of this started with the desire of P&W to reduce the maintenance staff from 10 people per engine to a single one. Job market ahoy. While some savings are going to be achieved, reducing 10x staff by increasing amount of data by 50x will not decrease the amount of staff but rather will increase the demand for data analytics engineers, and again, airlines just might adopt a system of their own.

While “Outsource and offshore everything” is the preferred M.O. aka Modus Operandi for a lot of American companies, P&W included, the fact of the matter is that big data industry is requiring more people and employees than ever before, and P&W will have to fight for every available brain on the market. That is something CFO/CEO aren’t likely to admit, but if you are a big data engineer, why would you pick a company that wants to reduce staff, than rather go and enjoy a life in a low tax surroundings such as U.A.E., Qatar, Singapore, Hong Kong etc. (and other MRO centers)? To the current and future generations of potential employees, concepts of ‘lay-offs’ and ‘furloughs’ are completely foreign terms, as the amount of American-accented staff in foreign airlines and airline operations increases.

Will Pratt & Whitney big data concept end up bleeding their own staff and future employees to competitors such as Rolls Royce and General Electric, remains to be seen. But P&W is the first to draw the line in the big data engine market. 2Tbps per second per each plane, 12 PB of data per year. Fastest American supercomputer today, Oak Ridge’s Titan – has 40PB of storage. IBM estimates P&W will need 100PB.

Finally, an Internet of Things

Just think about it for a second. This is the real ‘Internet of Things’ – and this is just one engine manufacturer. Add in GE, RR and other smaller players, and the number IBM cited of 100-150PB of streamed data per year is not unimaginable for aircraft industry alone (plane telemetry + streaming internet access for passengers). According to the NSA mission statement (PDF: The National Security Agency: Missions, Authorities, Oversight and Partnerships), Internet traffic today is around 660-680 PB/year.

Still think we’re heading for a data wall where limited or no innovation will take place? Think twice. Pratt & Whitney did.