Given the slow disintegration or refocusing of its competitors, we were not all too surprised when Intel started to slow down its famous “Tick-Tock” manufacturing cadence. Originally introduced in 2006 with the “Conroe”, Core 2 Duo processors, Tick-Tock was mixed between a new microarchitecture and current manufacturing process (Tock), and a new process, die-shrink processor with some architectural optimizations (Tick).

Further separation in Tick-Tock was a cadence between mainstream parts (desktop, mobile) and high-end parts (gaming, workstations) – Tick or Tock would always debut as mainstream parts, followed by high-end 6-12 months after. High end would typically mean Intel Xeon and Core i7 ‘X’ line-up.

The mainstream platform is powered by APU’s which combine from two to four processor cores and an integrated Iris-branded GPU, while high-end consists solely of high-performance CPUs, with six-to-eight processor cores in a single package.

Delayed over 14nm manufacturing issues, mainstream desktop parts only appeared few weeks ago, bringing a mixture of BGA and LGA parts for the desktop platform. While sites rumored that Intel as a company will drop LGA, so called ‘socketed’ processors from the lineup – in our conversations with Intel we learned that was not the case and Broadwell-C utilizes Socket LGA-1150. 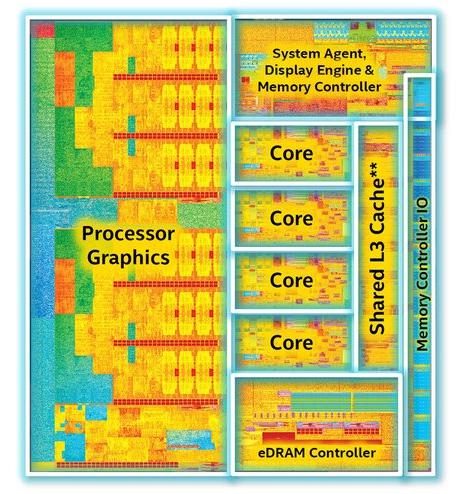 Broadwell diagram shows that it is indeed an APU, as over half of the die is occupied by graphics. Let’s not forget second die on the package – 128MB of eDRAM that improves GPU performance.

According to sources in the know, Intel will unveil Skylake on Gamescom conference on August 5th, 2015. Skylake is a 14nm processor which can be considered either as a tock or a tick. It still draws most of its design from Haswell, meaning we could treat it as a second 14nm tick for Intel. The architecture is still mostly the same, but the company changed the circuit design and focused on achieving best possible performance/watt. Performance should be significantly improved over Haswell and Broadwell, which may or may not be true after Far Eastern website TechBang leaked results of Intel Core i7-6700K, a flagship desktop Skylake part. Even though the page was taken down, we (just as well as KitGuru, Hexus and others) managed to look into the initial benchmarks and from the looks of it, performance jump comes largely from the integrated GPU part. 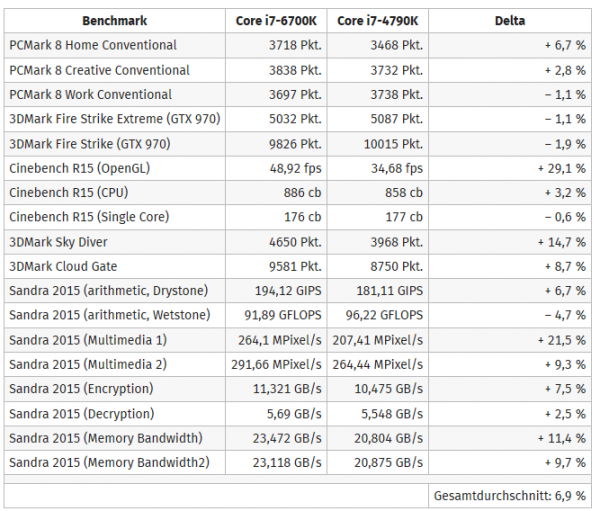 Most important change that Skylake brings is the new platform for mobile and desktop computers. 100 Series chipsets will debut DDR4 on mainstream platform, as Haswell supported both DDR3 and DDR4 (X99 chipset). The socket will get one ‘line’ more, with LGA1151 replacing LGA1150.

Kaby Lake is somewhat a surprise part. While we all expected that Skylake (tock?) is followed by its 10nm die-shrink codenamed Ice Lake (tick?), it looks like Intel is working on Kaby Lake, either canceled or delayed Ice Lake and slipped 10nm ‘tick’ Cannonlake (ex-Skymont) to late 2017 or early 2018. 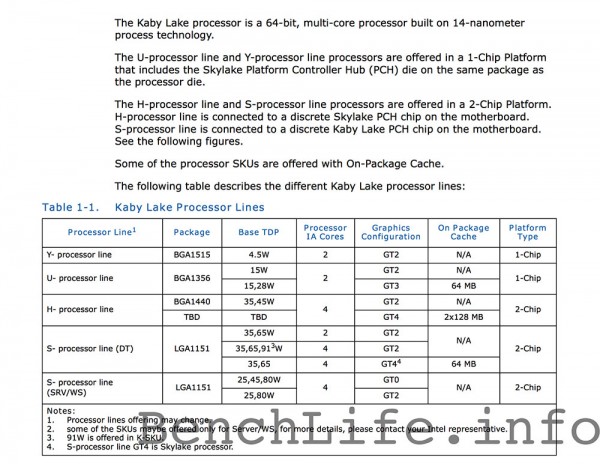 Leaked PDF document discloses details over Kaby Lake, a 14nm APU from Intel that should serve as a stop gap between 14nm and 10nm processes. Credit: BencLife.info

Kaby Lake is a 14nm processor targeting desktop and mobile platform, and will be available in full lineup, just like Haswell and Skylake. At least, that is if you can rely on leaked data from BenchLife.info.

Even though Intel is known for integrating everything-and-the-kitchen sink into its silicon (ALU, FPU, Caches, GPU, PCIe, GbE, USB, Thunderbolt etc.), Broadwell, Skylake and Kaby Lake all are skipping the Fully Integrated Voltage Regulator (FIVR), which was a cause of a lot of discussions when Haswell originally came out. FIVR might come back in Icy Lake and Cannonlake, but it was removed after Haswell since the power consumption was too high for the silicon, as reported by Hardwareluxx.

We do not believe that Intel called it quits on its Tick-Tock cadence, but problems that Intel hit with the 14nm had its effect and the company probably decided it was for the best to integrate more 14nm and more 10nm processes. Mature 14nm process is of utmost importance for Intel, as the fate of (r)evolutionary Purley platform (scalable from 2 to 8 sockets, includes a U.S. government grant-backed OmniPath 100G interface) depends on it.