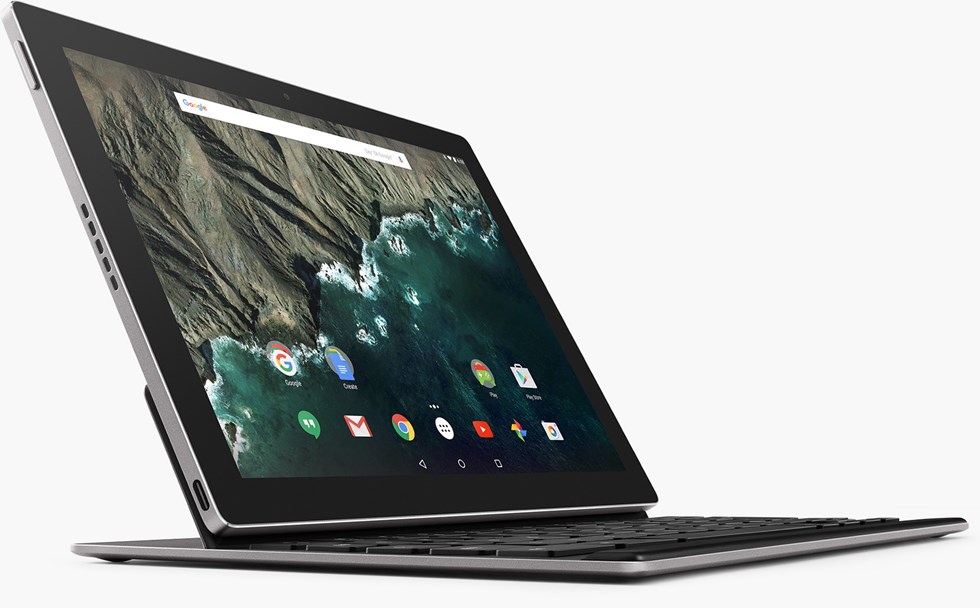 Since its introduction in 2012, Google’s reference Nexus tablet grew in (screen) size and features. 2012-2013 saw 7″ and 10″ models, Nexus 9 debuted in late 2014 and now, we are seeing Google reserving the ‘Nexus’ brand for smartphones only. The new reference tablet from Google is named Pixel C; a 10.2 inch, high-resolution (308 pixels-per-inch) tablet runs the Android 6.0 Marshmallow operating system. Just like Microsoft and Apple before, Pixel C comes in a tablet + keyboard layout, which is the new industry standard for ‘productivity tablets’.

This combination should makes typing and daily work easier, faster and more task oriented, but also enhance the way you use a portable device like this – especially in areas where the tablet was awkward and difficult to use due to its touch screen. This product is bound to compete against Microsoft Surface 3 Pro and Apple iPad Pro, giving consumers the option to go either for Windows 10, Android 6.0 or iOS 9 operating systems. The former was the first with productivity tablets, while the latter have significant brand loyalty behind it, which should result in good sales, but also show up to be a much more expensive device. Plainly speaking, this combination, delivered by Google, will probably cost about half of what iPad Pro will entitle with its price tag.

The only major issue we see with the Google Pixel C might be its hardware. While NVIDIA Tegra X1 processor is unknown quality when it comes to powering a tablet, this part is a high-performance chip integrated in cars and other performance-demanding, not power-saving environments. However, if Google pulls it off, Tegra X1 processor should give a lot of headache to its competitors with superb GPU performance. X1 comes with eight 64-bit ARM CPU cores, and 256 cores – identical to ones featured in GeForce and Quadro graphics processors for desktop and mobile platforms. Full GPGPU support through CUDA, OpenGL, OpenCL, Vulkan could sprung impressive adoption among developers, who could not use a tablet for GPU accelerated coding.

Pixel C’s achilles heel might be memory – X1 is paired with ‘only’ 3GB of very fast LPDR4 memory. It is rumored that Apple decided to pair its A9X processor with 4GB of LPDDR4 RAM, while Microsoft’s Surface 3 Pro can come with as much as 8GB memory (but is DDR3, and 3-4x higher price tag) that should provide lighting fast performance.

Pricing for the Android powered Google Pixel C is set at $499, and that will get you 32GB of storage. Doubling the storage space will cost you an additional $100 and that’s it – no 128GB is offered, something Apple and Microsoft will be keen to point on. Google is keeping it under wraps, as far as the availability goes. According to Google, this Pixel C tablet will be available in time for the holiday season.