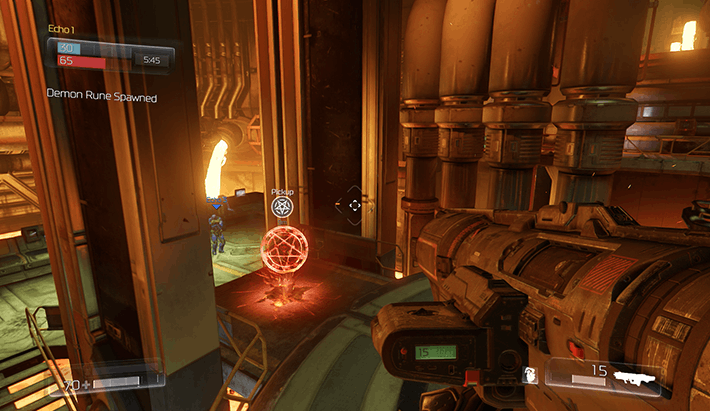 When AMD introduced its Fiji GPU family, the company said that the innovations put into the GPU will give solid performance in applications of today, but that they will ‘kick ass’ as soon as future applications begin to appear. Precisely, two high ranked AMD executives we talked to openly discussed their focus on DirectX 12 and Virtual Reality. As Fiji approached the launch date, NVIDIA countered by launching GeForce GTX 980 Ti, i.e. a $1000 Titan X card with half the memory – for 35% less.

Overall winners were gamers, who got an incredible choice, high performing parts for (more) affordable prices. Depending on who you like, you could build an almost future-proof system today. How will it perform? Russian website GameGPU released benchmark results for upcoming 2016 edition of DOOM, an upcoming hit-title from id Software / Bethesda Softworks. The site got a hold of DOOM Multiplayer Alpha build, released to crash-proof the mutiplayer servers.

The game will launch in just a bit over two weeks, and id Software promises this time they will ‘crank the volume to 11’. In a series of blogs, developers promised they will deliver bleeding edge tech and utilize everything OpenGL/Vulkan-based idTech 6 engine can deliver.

“We want players to wonder how DOOM and idTech 6 games can be so visually stunning at 60 frames-per-second at 1080p on all platforms, when other titles cannot even achieve a similar look at 30 frames-per-second,” says Lead Project Programmer Billy Khan. “Our goal is to be the best-looking game at 1080p at 60fps.”

“Many on our tech team worked at Crytek before, so we’ve known and worked with each other for some time,” says Lead Render Programmer Tiago Sousa, who’s been with id for a year-and-a-half. “It’s been an interesting and productive venture, learning about idTech foundations and researching where and how we will take it to new levels. My hope is not a very humble one, but I’d like to help bring idTech back to the forefront of technology once again.”

Typically, we would refrain from commenting on Alpha benchmark results but given that all hardware vendors regularly quote the said performance in their email blasts to us, from today we will be covering as much game titles as we can.

Onto the benchmark results. GameGPU site tested the hardware using a variety of hardware configurations, including Intel Core i7-5960X (Haswell-E) and AMD’s FX-8350. Do note that the CPU was overclocked to 4.6 GHz in order to remove any potential CPU-related bottlenecks. 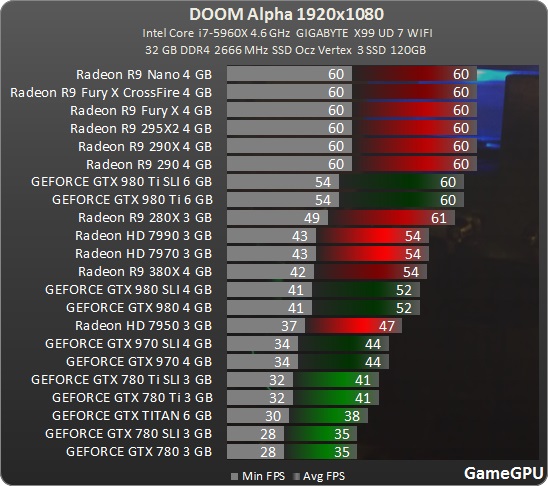 As you can see in results above, the framerate is capped at 60 Hz / fps. Quite surprisingly, majority of AMD hardware simply flies in the benchmark, achieving 60 fps for both minimum and average frames per second. What is interesting to see is that AMD Radeon R9 290, and R9 290X – almost three year old hardware is capable of achieving 60 fps. When we look at the difference between R9 290 and its competitor of the times, GeForce 780 Ti – the difference probably comes not just from maturity of the OpenGL drivers, but also from efficiency of the internal architecture.

From the other hand, do not expect multi-GPU scaling, as it only creates an overhead with this build. 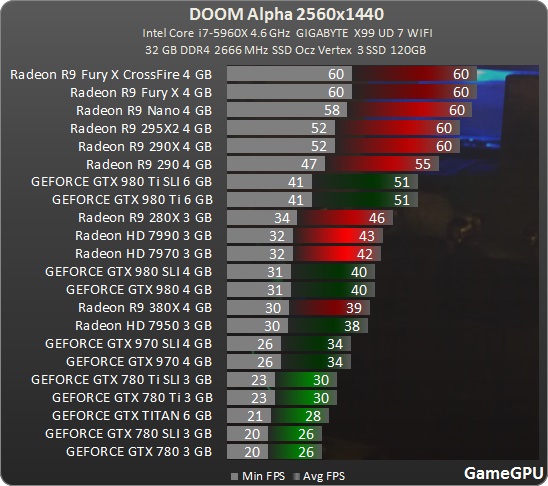 The difference really starts to show in 2560×1440 resolution, which alongside 3440×1440 is becoming increasingly popular among the gamers worldwide. Regardless of who is your GPU vendor of choice, it is clear that NVIDIA has a lot of work to do with their drivers. A single, three year old R9 290X is beating a contemporary GeForce GTX 980 Ti in both single and multiple-GPU configuration (SLI). Based on our experience with Bethesda, CryTek, and idSoftware – it is hardly believable that NVIDIA did not work hand in hand with the AAA-level developers which often released titles that perform superbly on NVIDIA hardware. The question is, did someone slept on its laurels? 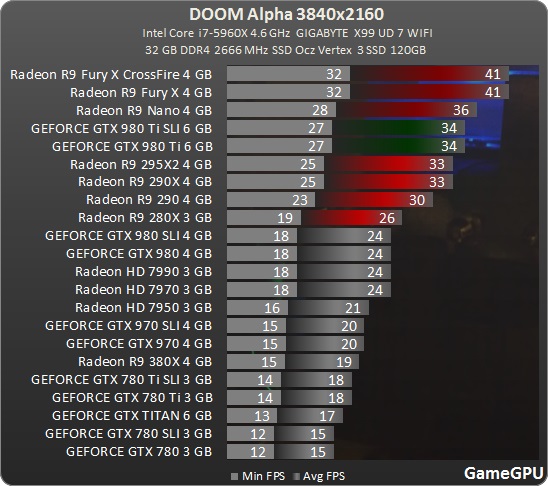 4K is the new frontier for gamers who want ultimate fidelity. Pushing eight million pixels per frame is a challenge for any computer out there, yet alone when we look at the performance of these cards. Radeon R9 Fury X in Crossfire mode is capable of pushing over 340 million pixels per second, same with the single card – AMD is in need of some serious multi-GPU optimization, and this perhaps is one of reasons why a single board with two Fiji GPUs (R9 Fury X2, R9 ‘Gemini’) hasn’t seen the light of day. But if we look at single GPU performance, R9 Fury delivers the same 320 million pixels as the dual board one. Perhaps the most impressive board is R9 Nano, which for $499 gives serious performance, single-handedly beating a $1,339.98 configuration from NVIDIA. Given how good the board is, perhaps R9 Nano is the best gaming card on the market.

Top 10 Graphics Cards for DOOM – Who Delivers the Most?

In order to calculate the results above we took the worst-case scenario, which is the 4K resolution, and calculated the number of pixels each GPU was capable of pushing through the display output.

The results above show a direct vindication of my recommendations since I joined the industry. I have always firmly believed that when you build your system, you need to build the top end graphics card, followed by as much system memory and fastest storage you can buy.

ATI Radeon HD 7970 debuted in December 2011, which is four and a half years ago. Yet, this card offers better performance than hardware you can buy in 2016 – note that AMD’s 300 series disappeared from the top 10, i.e. was incapable of reaching 200 million pixels per second. Same story goes for NVIDIA – unless you have GeForce GTX 980 or 980 Ti, you’re SOL when it comes to DOOM. Given that the authors from GameGPU did not had access to TITAN X, or the regular Fury – we can only guess how would the Top 5 GPUs list end up looking like, but it is safe to bet that TITAN X and Fury would probably push the 295X2 and 290X out of Top 5.

DOOM is coming out on March 15, 2016 – and we’ll follow up with our in-house testing when the game gets released. Clock is ticking, and let’s see what can change in two weeks. NVIDIA and AMD sure need to fix their multi-GPU scaling (if possible), and NVIDIA needs to ramp up the performance across the board. Otherwise, it could be a second big loss in as many weeks (after loosing to AMD in DirectX 12 benchmark Ashes of the Singularity).