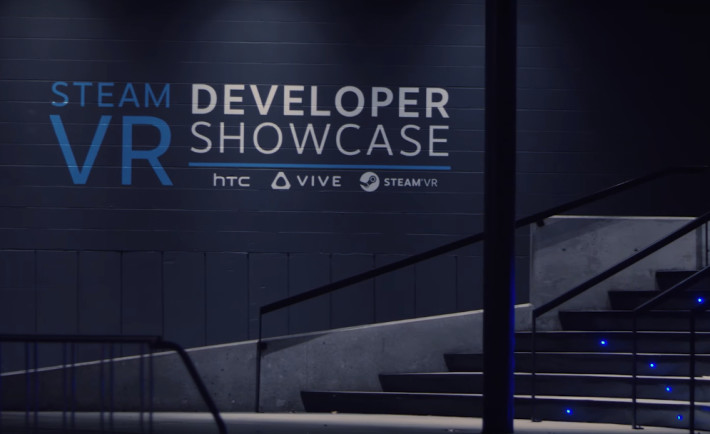 The video opens up with Andy Moore talking about Fantastic Contraption, a building game for VR. He says most people don’t know how mind-blowing VR can be because they mostly see screenshots. He makes a valid point: after jumping into a virtual world using the HTC Vive or Facebook’s Oculus Rift, you instantly understand why the move to VR is such a big step forward in computing. VR is market-changing, the evolution of interaction, and that’s hard to grasp when looking at mere screenshots, trailers, or videos.

“We struggled a lot with how we communicate this,” he admitted to the group. “And every time we actually put someone in the game, they went ‘Oh I get it now!’ Ok so we’re like, ‘how do we capture this?’ So we taped one of the hand controllers to the camera, and as we were panning around the room, we tracked its motion so that we could capture game footage from the computer and get different angles. It looked okay, but it didn’t quite get the job done.”

Moore said his team thus iterated on that by dividing the world in half right at the point of the headset. There were also two cameras – one rendering the foreground and one rendering the background – and inserted in-between was a webcam shot of a person in their living room. The end result produced a video of someone physically standing within the virtual world. That, he said, was the best marketing the company has done so far regarding convincing consumers about the immersion of virtual reality.

The session, hosted by Valve’s Chet Faliszek, starts off with a discussion about how development has changed as VR hardware has matured over the last several years. Denny Unger said that change went in incremental steps, such as Oculus VR releasing DK1 that had rotational tracking and an “ok” display. It just leveled up from there with positional tracking, he said.

“We were using Razor Hydra as kind of like a surrogate to do hand interactions at the time, and that actually worked really well,” Unger said. “There was some latency and all the kind of associated problems with that, but it gave us a kind of a window into what might be possible to be using your hands in a VR context. And then things kept changing and Vive came along and we suddenly have access to a full room-scale positional tracking system. And with each kind of incremental step we had to kind of re-invent what we were building to really suit that experience.”

Both videos are a fascinating look into VR development, and should get you pumped up regarding the consumer release of the HTC Vive and Oculus Rift. The HTC solution will be made available to consumers on April 5 whereas the Oculus Rift, which isn’t SteamVR-related, hits the market first on March 28. You can read our preview of SteamVR games here, most of which were featured in this story.