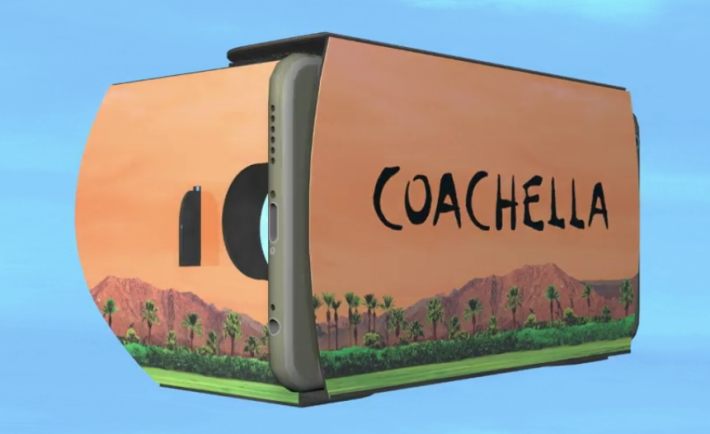 The Coachella Valley Music and Arts Annual Festival has teamed up with Vantage.tv to provide fans with a virtual reality experience right out of the Welcome Box. This package, while containing the customer’s tickets, entry wristbands, a welcome guide, and other goodies, will also provide a VR headset based on Google Cardboard that can be used with special Coachella VR apps listed on Google Play and Apple’s iTunes. The Welcome Box will be distributed to ticket holders in early March.

“Before, during, and after the festival in April, fans from all over the world can be immersed in performances from top artists, experience 360-degree panoramic experiences from around the festival grounds, and watch VR experiences created by other festival-goers,” Vantage.tv states.

Supported devices for the Coachella VR headset include the iPhone 5S or newer (Cardboard iOS) and phones with Android 4.3 or newer (Cardboard Android). The company says that support for the Samsung Gear VR headset will be coming soon as well as the Oculus Rift and the HTC Vive. The company suggests that viewers use a Wi-Fi connection of at least 5Mbps to optimally see the VR content.

Coachella is a music and arts festival that takes place every year at the Empire Polo Club in Indio, California. The festival spans over two weekends, this year being April 5-17 and April 22-24, 2016. The lineup of musicians is huge for the 2016 shows, including popular artists like The 1975, Guns N’ Roses, Miike Snow, Sia, Calvin Harris, and tons more. A number of celebrities are also slated to make an appearance.

The Coachella VR app provides a virtual “auditorium” where any visitor can access video performances by Coachella 2016 artists like Matt & Kim, Gallant, and Chef Fretz of The Church Key. Users can also explore the grounds, check out interviews, and view 360 panoramic photos taken from previous Coachella festivals.  More content will be released as the festival dates near, the Facebook page states.

The Coachella VR app is powered by Vantage.tv, which was founded in 2014 and came out of stealth mode back in October 2015. Based out of San Francisco, the virtual reality startup set out to create a VR platform based on live events. It’s first event was a VR live stream of the Austin City Limits Music Festival, which the company says had an attendance of over 400,000 viewers.

“We envisioned a way that by using virtual reality technology we could allow fans to get better access to the performances they love,” said Juan Santillan, Vantage.tv’s co-founder and CEO. “Vantage.tv was developed to create that special moment between fans when they get ‘The best seat in the house’ and for artists and event promoters a powerful new revenue and marketing experience.”

Google said back in January that more than 5 million Cardboard viewers had shipped since its release. Even more, Android device owners had installed Cardboard apps from Google Play more than 25 million times. Furthermore, both Coca-Cola and McDonald’s entered the VR arena with their own Cardboard VR designs. The top five Cardboard apps included Chair in a Room, Vrse, Lamper VR: Firefly Rescue, Caaaaardboard, and Photon Pulse. More than 350,000 hours of YouTube videos were also watched in VR, the company added.