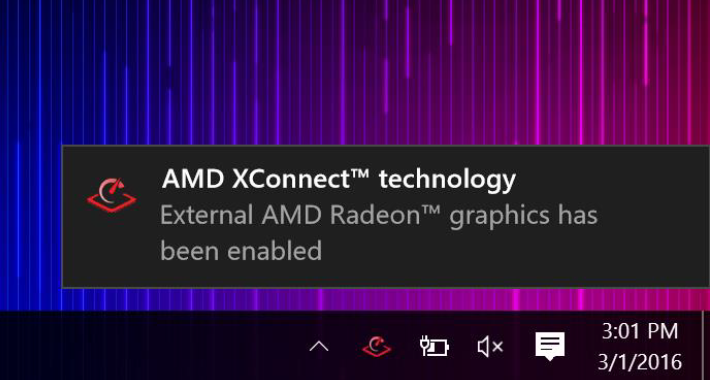 Need for powerful graphics in notebooks is reaching the tipping point, as Virtual Reality and especially Augmented Reality require even more compute power than a hihg-resolution display. Eight years ago, AMD tried to answer the demands of that era by launching the XGP – eXternal Graphics Platform. This short-lived standard was only supported by Fujitsu Siemens AG, and other vendors sadly chickened out.

Fast forward to Autumn 2015, with AMD launching R9 Nano. This small card only draws  175 Watts and yet, it achieves about 85% of performance offered by the top-of-the-line R9 Fury X. We mentioned that this card would be an ideal pairing in high-end laptops, if they were only able to offer an external casing. Just in time for Game Developer Conference 2016, Robert Hallock (Head of Global Technical Marketing) announced AMD XConnect technology – its second standard for external graphics processors. 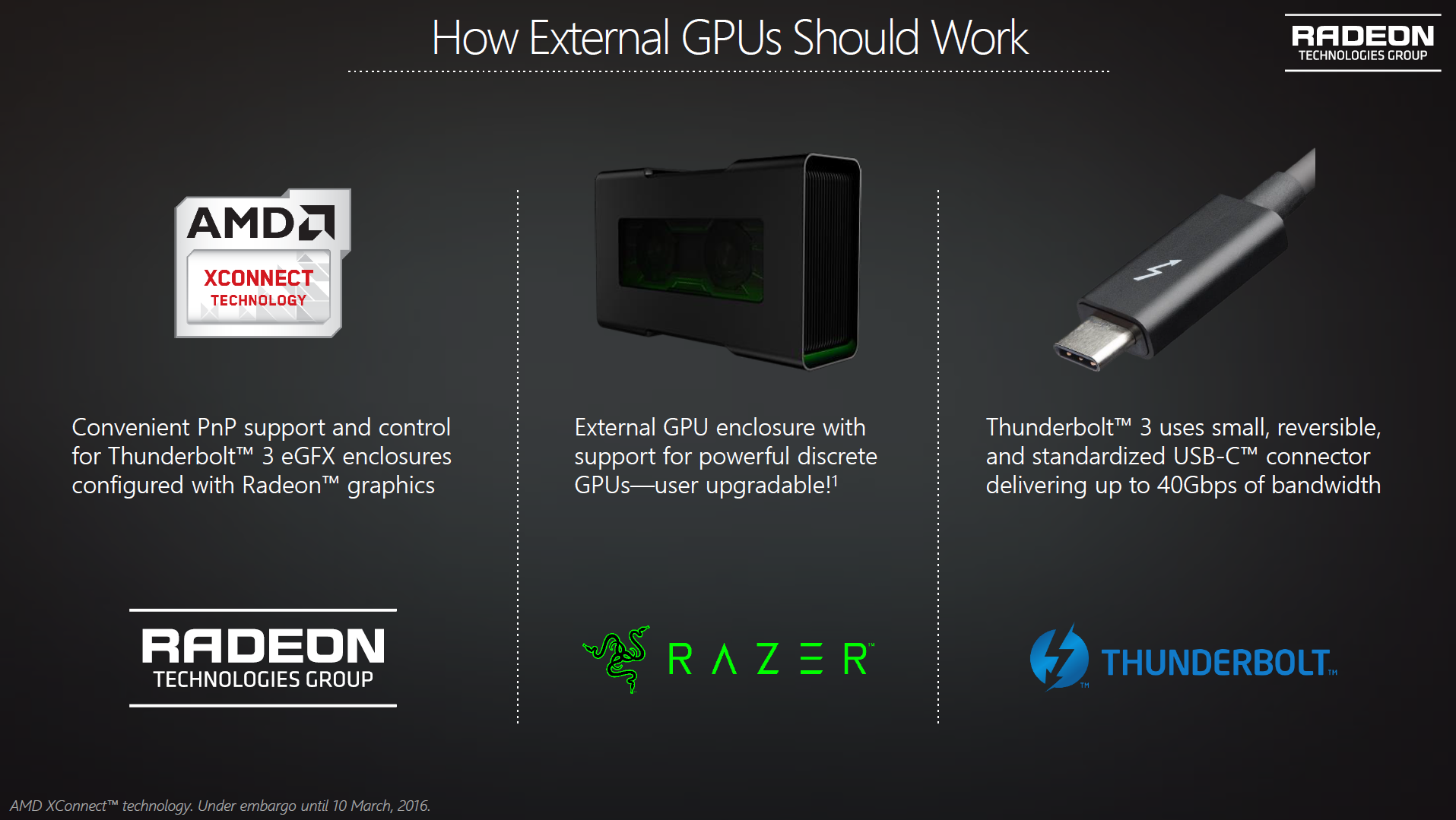 AMD XConnect ‘eGPU’ technology is a product of collaboration between Razer, AMD and Intel.

In order to ‘make things right’ for the mobile gamers, and professionals, Radeon Technologies Group worked hand in hand with Razer and Intel. Each company participated with significant amount of engineering resources needed to make this technology a reality. AMD RTG developed the XCONNECT driver, which offers ‘PnP suport and control for ThunderboltTM 3 eGFX enclosures.’ Intel’s Thunderbolt team made sure that Thunderbolt 3, with its 5 GB/s bandwidth can drive all aspects of external graphics.

To put the bandwidth figures in comparison, AMD’s current platforms support PCIe Gen 2. When you buy an AMD motherboard today such as GigaByte’s GA-990FX Gaming – which we featured in our Virtual Reality Computer – it offers PCI Express 2.0 in x8 and x16 slots. The x8 delivers 4 GB/s, while x16 offers 8 GB/s of bandwidth. Thus, AMD XCONNECT offers 25% more bandwidth per card than your AMD-based system if you put a second graphics card in a PCIe slot. 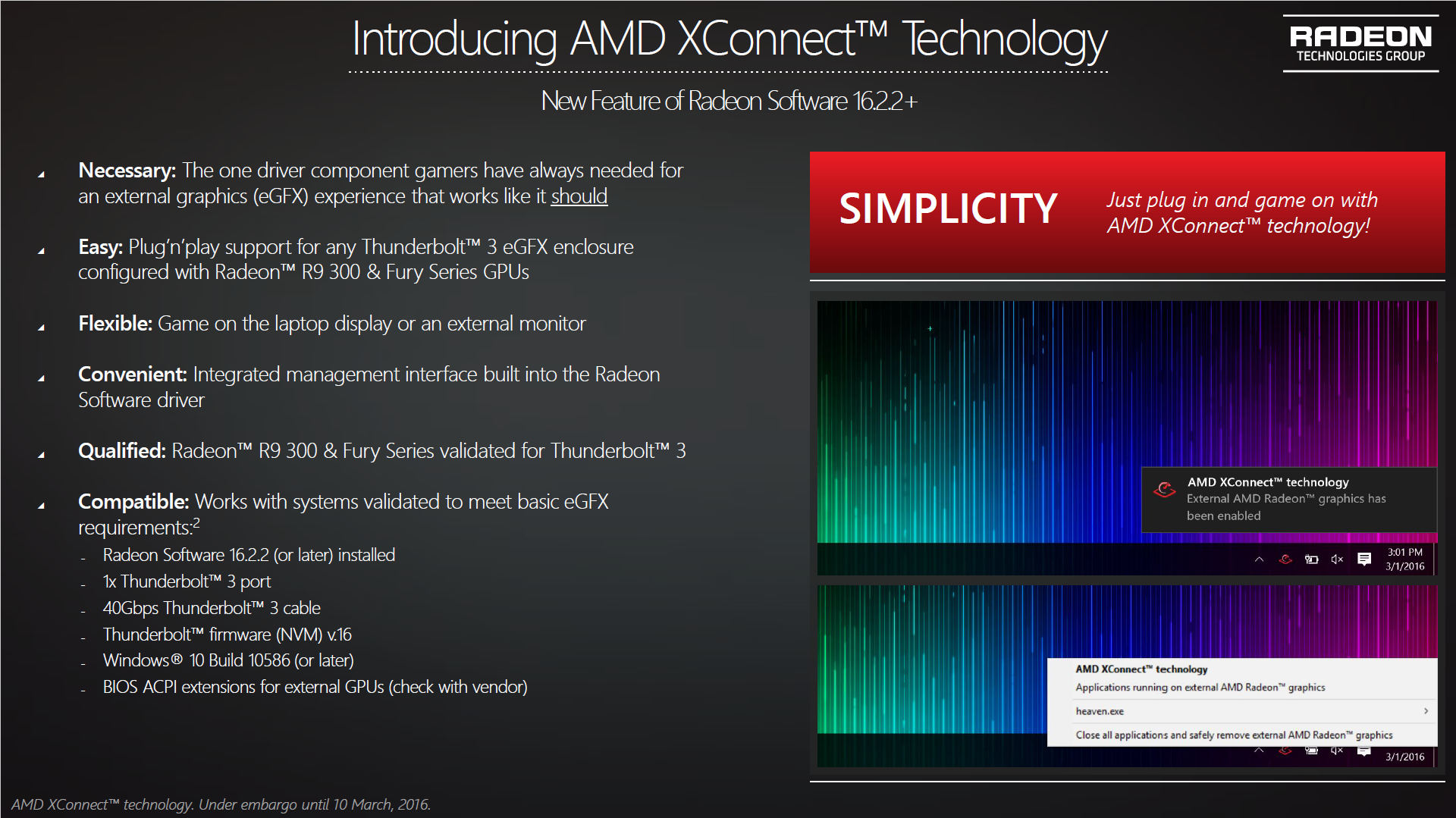 As you can above, AMD XConnect technology is completely embedded inside the Radeon Crimson Software (from 16.2.2.), and it just happens that today AMD released Radeon Software 16.3, which brings numerous improvements over the previous version, including the support for Vulkan API from The Khronos Group. Perhaps the most important aspect of XConnect technology is that it works both ways i.e. it can power not just an external display, but the integrated notebook display as well.

Finally, we have Razer who worked on this project since the spring 2015. This progressive company from Singapore (and North San Diego county) is known for gaming peripherals and notebooks with uncompromising build quality. The company even had to battle the el cheapo suppliers who didn’t want to produce green USB connectors. Luckily for Razer and their leadership, attracting a lot of venture capital meant the company was free to develop technology which is not considered mainstream.

Good example is OSVR, Open Source Virtual Reality standard – which is being driven by Razer. But developing and launching probably the most affordable VR development kit our there – $299 for OSVR Hacker Kit meant not a single product in Razer’s lineup was offered good enough performance for content creators and future consumers. 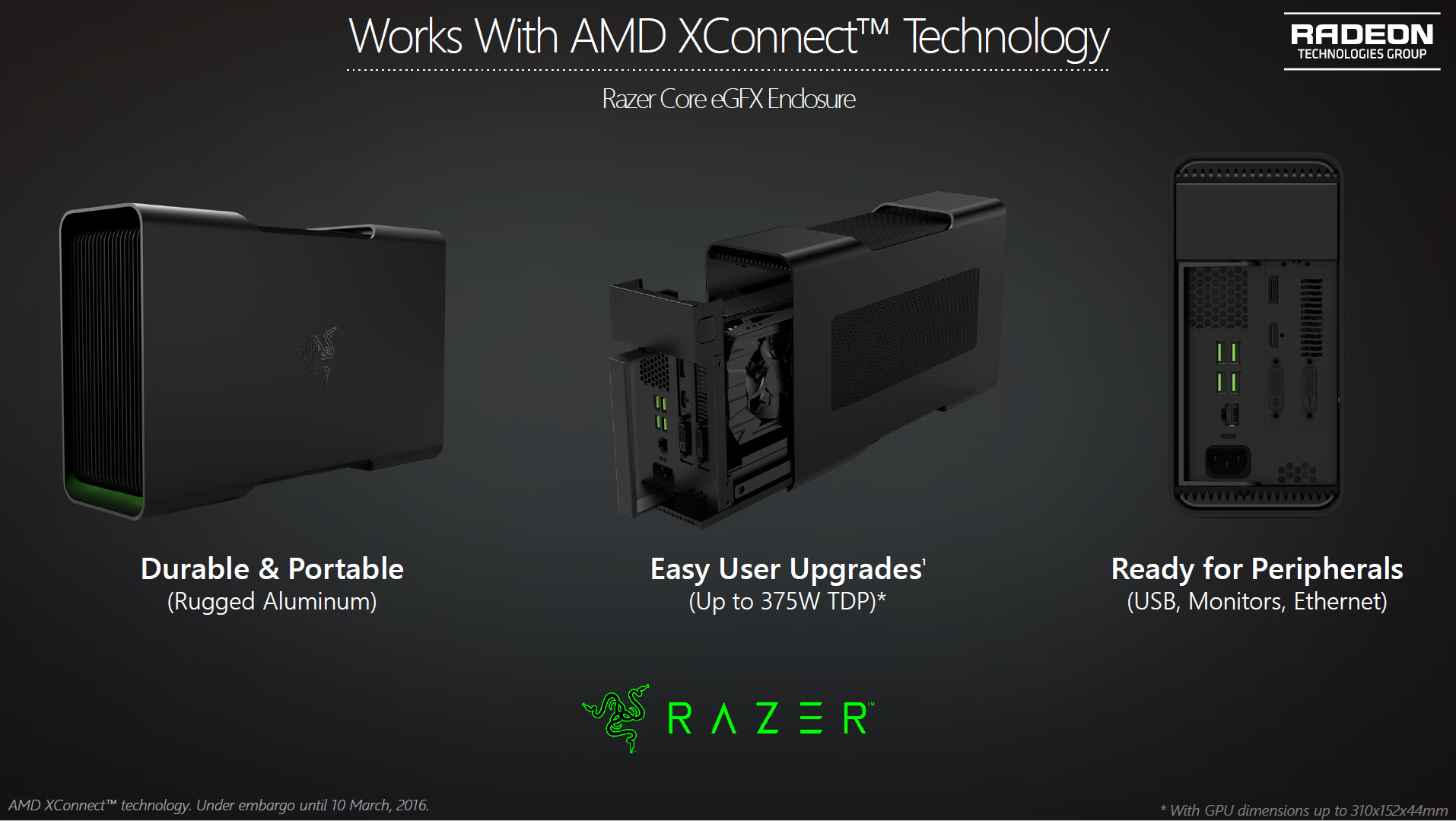 Core eGFX enclosure is designed in the same style as Razer’s gaming laptops, combining the 400 Watt compact power supply (up to 375W for graphics) with four USB 3.0 ports, Gigabit Ethernet and an AMD Radeon or FirePro graphics card up to 310mm in length. You can install any card from Radeon R9 300 series, R9 Fury or R9 Nano. We inquired about the FirePro line-up and will update the story when we receive an answer.

Alongside with the case, you will need a notebook with Thunderbolt 3. Razer is promoting Blade Stealth as the first choice for AMD’s XConnect technology. Specs of this 12.5″ laptop are very impressive, and the Core eGFX is the last thing this notebook needed to become a productive workhorse:

The only weak point of this laptop is system memory – upgrade that as soon as you can.

AMD, or should we say RTG is doing a lot of good things of late. The decision to launch the AMD XConnect external graphics technology at the time when R9 Nano dropped to $499 is nothing but praise worthy. Still, the shadow of XGP will linger for as long as Razer stays as the only OEM supporting the technology. AMD needs a second and a third OEM to hit different price and format points. Perhaps a company like Dell, which recently won an award as the most ethical company – as their XPS notebooks support Thunderbolt 3.

XConnect also might be that solution we need for high end Virtual Reality experiences on notebooks, with upcoming dual-GPU solutions using the next generation Polaris architecture. There is no doubt that there can be a good spot on the market for AMD XConnect technology, but we need volume to drive the cost down and finally bridge the performance divide between a desktop and a notebook. But these blips of brilliance need a stronger market traction and for that, AMD or RTG’s management cannot hope that a white knight will come on a horse. They have to become that white knight themselves and only then we will see the market reacting to it.