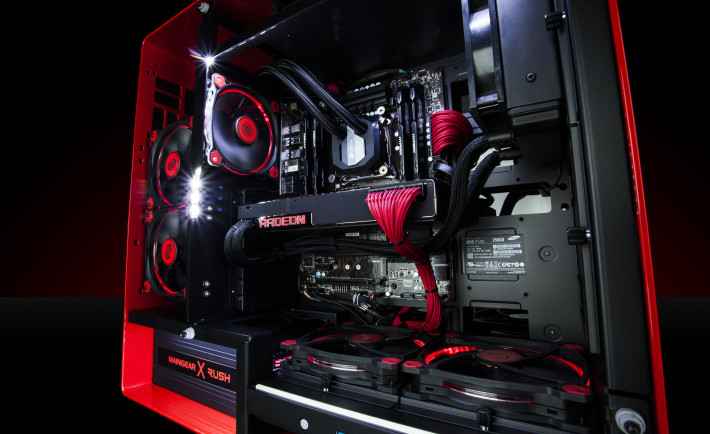 Today, at the 2016 Game Developer Conference, AMD announced some major shifts in the VR System market. According to AMD, the company will underscore its dominance of the global virtual reality systems market. It revealed new advances in hardware and software to further the reach of VR, and unveiled its new GPU certified program that simplifies adoption of VR technology for consumers and content creators. According to Jon Peddie Research as of March 11, 2016, AMD is estimated as powering 83% of the total addressable market for dedicated VR HMDs.

“AMD continues to be a driving force in virtual reality,” said Raja Koduri, senior vice president and chief architect, Radeon Technologies Group, AMD. “We’re bringing the technology to more people around the world through our efforts to expand the VR ecosystem with VR i-Cafés in China, new Oculus Rift and HTC Vive headsets, and a wide variety of content partners in gaming, entertainment, education, science, medicine, journalism and several other exciting fields.”

Another goal for AMD is making VR more easily accessible to consumers and content creators. This is done with AMD’s own recently revealed GPU certified program featuring the new “Radeon VR Ready Premium” and “Radeon VR Ready Creator” tiers. Its forthcoming Polaris GPUs and award-winning AMD LiquidVR™ technology will simultaneously advance groundbreaking VR-optimized graphics. All of this will amount into an industry leading, albeit rather new to consumers way of doing things.

AMD will today announce its new GPU certified program for VR, allowing OEMs, system builders, and AIB partners to instantly communicate to consumers which certified Radeon™ products can be used to deliver exceptional VR experiences with the Oculus Rift and HTC Vive headsets.