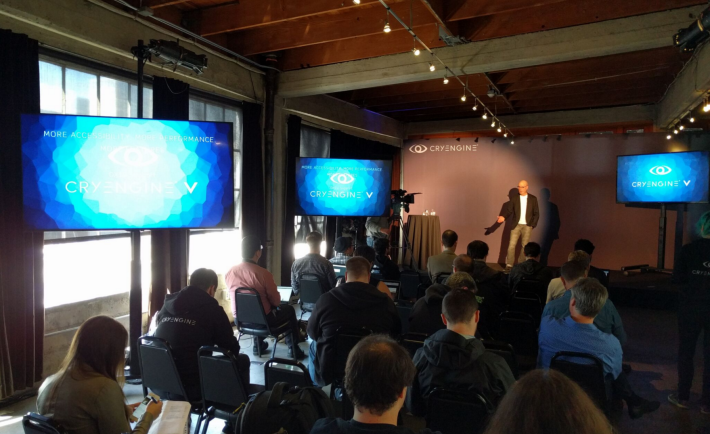 A trip that every entrepreneur takes is a risky one. Some 15 years ago, a small company from Germany came up with a 3D engine that drove incredible experiences in the form of Far Cry franchise. 12 years later, CryTek has evolved from being a game developer into an engine company with the latest CryEngine release presents the next step in evolution.

First and foremost, CRYENGINE V is now free. The company is adopting the “Pay What You Want” model, and shifting from today’s business model into a model that will see the company grow beyond being a game engine technology company. The new strategy started with collaboration with Amazon on creating the Lumberyard engine (for all intents and purposes, Lumberyard is CryEngine with several distinct changes). Then, the company worked with Basemark Oy to create a virtual reality benchmark using the fifth generation of CryEngine.

These are the features of CryEngine V:

For VR, CryTek has aligned themselves with AMD, adopting the LiquidVR technology for Virtual Reality, but the company isn’t stopping there. CryEngine V is a start of somethign new. In alingment with the new strategy, everything is lining behind the “VR1” (Virtual Reality First) agenda. CryTek launched a non-profit organization which will drive the adoption of VR First in educational institutions worldwide. First VR Lab was set in Istanbul, and there is over a hundred universities that applied to create a VR lab of their own. We spoke with the company representatives after the event, and they disclosed about 20 educational institutions are launching their VR Labs as a part of VR First initiative – with interest far outstripping the capabilities of the Foundation. Which is a good problem to have.

In a way, this reminded us of how NVIDIA came from a hardware vendor for gamers and created CUDA, which then became the pervasive GPGPU, GPU Computing language. NVIDIA pushed CUDA into universities, and today over 3,000 universities use CUDA for GPU compute. Regardless of what the computer science students end up using (OpenCL, Intel Compiler for Xeon Phi), their first steps were done on CUDA. With CryEngine V and its VR First initiative, CryTek just might be onto something – by giving the latest technology engines (CryEngine V, but there’s also Amazon’s Lumberyard), pushing a spec for a VR Lab – it is positioning itself nicely as an entry point into the world of Virtual Reality.

It should be fascinating to watch what kind of VR Applications are next generations going to start with, and for a good number of them, they will start with CryTek’s VR Lab.