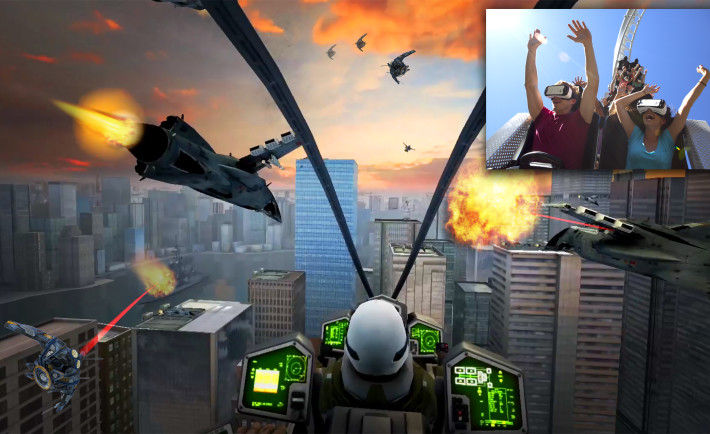 Running and building new roller coasters is a daunting experience, requiring tens of millions of dollars of investment. In the case of Ferrari World Abu Dhabi, the roller coaster they built there achieves equal speed to a Formula 1 car… just for 16 people accelerating 0-241 kph (150 mph) in less than 5 seconds. Once you experience that, you want to experience more and more.

In a bid to get Virtual Reality Experience (#VRex) to the mainstream market, American theme park operator Six Flags is literally re-inventing the wheel. The company is creating VR content for its roller coasters, and has recently rolled not one, but multiple virtual reality experience using Samsung’s Gear VR, which you can see in videos below.

The fighter pilot VR experience is then being rolled to older attractions, which are all getting adjusted to the path the coasters will take. To launch the experience, Six Flags is offering it as a VR and regular experience on its first Revolution roller coaster, which opened on May 8th, 1976 – marking 100th anniversary of the American Revolution. As such, The Revolution is being rebranded as ‘The New Revolution’.

Revolution is not the only VR coaster, as Six Flags rushed the experience onto older attractions in different parts of United States, such as ‘Six Flags over Texas’ and ‘Six Flags Georgia.’

This move can be seen as a brilliant strategy to extend the life-span and fun factor of already existing, and future roller coasters. Almost everyone will want to experience the VR before or after taking the ride in the default version. Perhaps you’ll get more entertained while flying in the VR world, and then get scared riding it ‘original’.

In any case, VR entertainment is starting to appear even in the most unlikely places. What do you think?