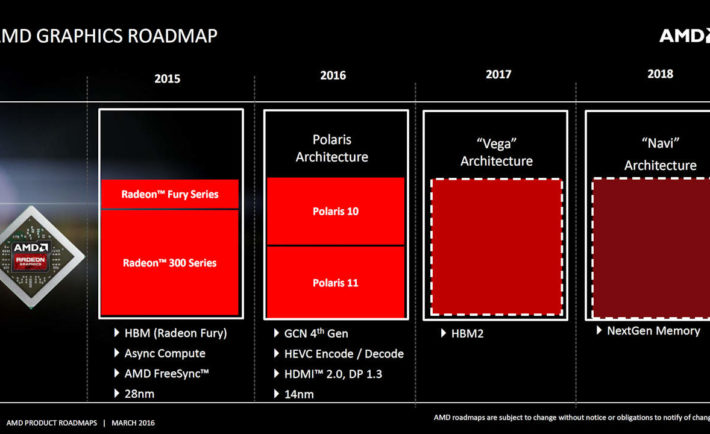 At the Computex Taipei trade show in Taiwan, AMD officially introduced the first products based on Polaris GPU architecture. Radeon RX Series also marks AMD’s arrival to 14nm and FinFET process technologies, delivered by GlobalFoundries. This manufacturing process, alongside the design decisions the team made several quarters ago marks the return of graphics wars, hitting the price points old 28nm planar process could not dream off.

When the company originally announced the formation of Radeon Technologies Group, it made a critical decision to change its product strategy. The new strategy is called “Water Drop,” where products are being released to select markets after serious discussions and evaluations of the market where those ‘drops’ are supposed to land. The first decision from the “Water Drops” strategy was to split the Arctic Islands family into two separate product launches. Polaris 10 and Polaris 11 are the mainstream parts released couple of months ahead of Vega, which will be the high-end part released later this year.

The reason for this product launch was the reaction from the VR ecosystem, which is currently experiencing growing pains. According to AMD, there are only 16% of PCs in the world capable of delivering a “VR Premium” experience. According to HTC and Oculus, relatively small number of installed user base is the reason why content producers are unsure of launching titles heavily optimized for VR.

At the recent event in Macau, we talked to senior management of AMD and RTG and they were quite adamant to address the negative feedback from the content publishers and praised companies such as Crytek, CCCP, Ubisoft – who were brave enough to release native VR titles, carrying a significant risk to the bottom line. Luckily for the consumers, The Cliff is probably the best title released for the Oculus Rift, while vendor-agnostic Eagle Flight will change the way how we view Paris.

Rather than targeting those 13 million PC’s with a limited availability Vega, AMD decided to address “the other 337 million gaming PC’s.”

Starting on June 29th, 2016, AMD’s is launching the Radeon RX 480 with 4GB and 8GB  of GDDR5 memory. What is impressive is that the four gigabyte model comes with a recommended price of just $199. Given the level of performance this board offers, it represents somewhat of a steal. Due to AMD being quite coy, we’re not able to bring you comparisons in performance between a recently released $699 GeForce GTX 1080 Founders Edition and two what is now two two-hundred-dollar cards.

GPU wars? Bring them on!