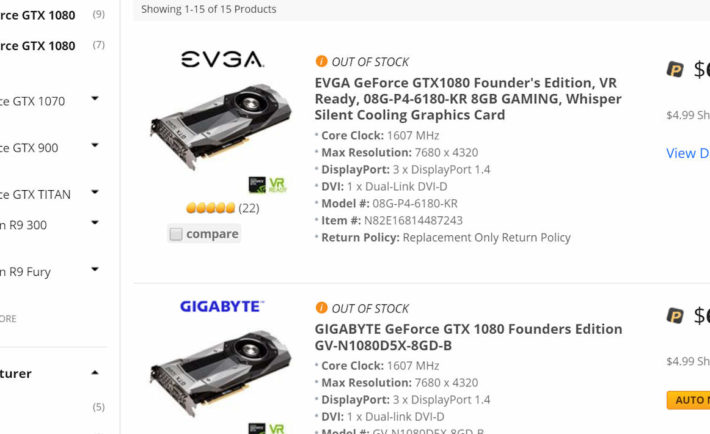 With the conclusion of E3 2016 trade show, which took place last week in Los Angeles, California – many international guests went on for the hunt for several hot ticketed items – HTC Vive, Oculus Rift and of course, Pascal-based GeForce GTX 1070 and GTX 1080. The ‘retail’ mission was the only option after availability from online e-tailers simply did not transpire.

HTC Vive is available in 3 out of five Microsoft stores we’ve checked, while Oculus Rift availability was tied to Intel’s Retail Experience. Best Buy in West Hollywood didn’t had Intel Retail Experience and there was no Rift, but the story changed in other stores. Only one store did not had Rift, but it was available on a 1-2 business day wait. Needless to say, a ‘short’ drive to Orange County resolved that issue – both HTC Vive and Oculus Rift were available in South Coast Plaza.

Sadly, GeForce GTX 1070 and GTX 1080 were nowhere to be seen, at a big disappointment of several of our friends who flew in internationally. This was compounded by looking into Nvidia’s MSRP and the reality:

Thus, our shopping trip ended with one HTC Vive, purchased at retail price, one Oculus Rift, purchased at retail price and zero GTX 1080. Now, with AMD announcing their ‘VR mainstream’ cards, we truly wonder will AMD fudge the product launch as well, or will they have availability of their $199, $229 and $299 Radeon RX 480 ($199 for 4GB, $229 for 8GB and $299 for custom PCB OC part from Sapphire)?

One last thing – if you pre-ordered Oculus Rift – just look for the closest Best Buy with Intel’s Retail Experience and snag yours. At MSRP. Kudos to Microsoft for in-store availability. Sadly, what might be the fastest VR experience just isn’t available on the market.