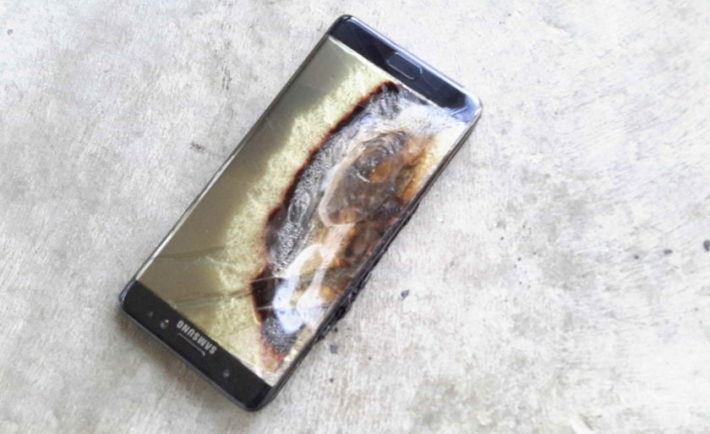 Samsung Galaxy Note 7 will probably go down the line as the most troublesome product in history of Samsung, and that says something. The Note started the “phablet” craze which resulted in every manufacturer – including Apple – coming out with a large “barely hold in the hand” smartphone. When it comes to the sixth generation (Samsung skipped Note 6), it will stay forever in infamy.

After a rocky start with several random fires, and recall + replacement of faulty Note 7 models, Samsung experienced yet another problem – overheating. After the company replaced phones, those new units started to have the same problem as the old ones. First case of a replacement phone catching fire happened on a Southwest Airlines flight. Luckily, the plane was on the ground. The phone caught on fire after its owner, Brian Green, turned it off. The phone was smoking and he dropped it on the floor, a thick grey-green smoke was pouring out of the device. After running IMEI recall checker returned “Great News, device is not in the list of affected devices.” Furthermore, a replacement phone caught on fire in the hands of a 13 year old girl.

Third case was reported at Kentucky. Michael Klering told that he woke up to find his bedroom filled with smoke and his phone on fire:

“The phone is supposed to be the replacement, so you would have thought it would be safe,” Klering told local TV station WKYT, saying that he had owned the replacement phone for a little more than a week. “It wasn’t plugged in. It wasn’t anything, it was just sitting there.”

Samsung asked Klering if they could take possession of the phone and he said no, though the company did pay to have it X-rayed – but the damning evidence comes in the form of a text message that Klering inadvertently received from a Samsung representative:

“Just now got this. I can try and slow him down if we think it will matter, or we just let him do what he keeps threatening to do and see if he does it.”

After that there were two more incidents, one in Virginia and other in Texas. Bringing the PR disaster to a halt, Samsung announced it is “temporarily” suspending the production of Galaxy Note 7 smartphone, in a report comes from the Korean news agency Yonhap. The halt in production is said to be in cooperation with safety regulators in the US, China, and South Korea.

At least five replacement Note 7 phones caught fire in the US alone this week, and several of Samsung’s carrier partners announced they would stop selling the phones entirely. For example, Samsung’s flagship stores throughout Europe still run ads for Note 7, but there are no devices in the store, with their place being taken by the regular S7 and S7 Edge. In fact, one could say that the Note 7 situation is bringing Samsung’s more affordable phones, such as the A-Series or J-Series – to the foreground.

Regardless of how this situation resolves, there is one important question – Can Samsung finally fix the Note 7 or this device found its end? One thing is certain, Galaxy S8 and Note S8 can’t come soon enough, and those devices are waiting on brand new 10nm processors from Samsung and Qualcomm.

For the end of the story, we leave you with a somewhat appropriate song by Bruce Springsteen which probably describes how the phone feels.