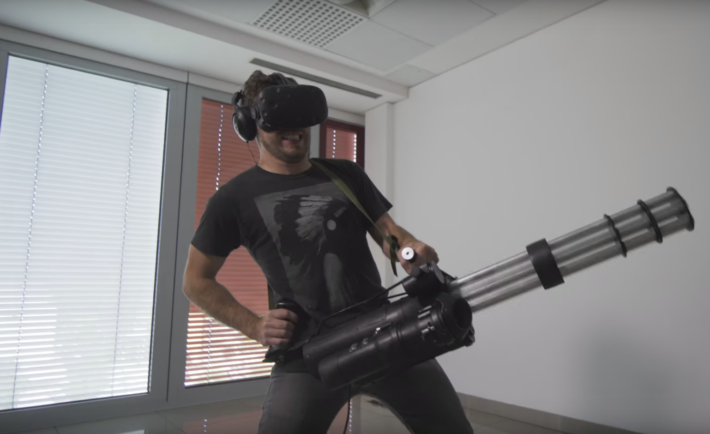 Croatian independent video game developer Croteam is best known for its Serious Sam franchise. Recently, they explained why they chose to develop Serious Sam for the HTC Vive platform, rather than other competitors. Earlier in the summer, Croteam caused a storm of comments by disclosing the strategies Oculus uses to secure exclusive titles. One such story included talking about a lifetime exclusivity clause – which means that Oculus-exclusive titles will never stop being exclusive. This was later debunked in an article on PC World:

“Oculus did approach us with an offer to help fund the completion of Serious Sam VR: The Last Hope in exchange for launching first on the Oculus Store and keeping it time-limited exclusive. Their offer was to help us accelerate development of our game, with the expectation that it would eventually support all PC VR platforms.” said Alen Ladavac, CTO of Croteam. “We looked at the offer and decided it wasn’t right for our team. At no time did Oculus ask for, or did we discuss total exclusivity or buyout of support from Vive. We look forward to supporting Rift and Vive.”

In a short video developers explain the excitement about the new and upcoming technologies, and Croteam as such is an ‘early adopter’ of latest and greatest from the tech world. When they received their VR development kits, they started to implement the technology into a remake of their most popular FPS. After the developers got the grasp on VR demands, they made a test level in Serious Sam, gave the player weapons and saw how it went. Test subjects were so impressed that the company decided to move the demo from a test project into a full blown experience that can be introduced to the general public. Official game name is – “Serious Sam VR: The Last Hope.”

Croteam decided to release Serious Sam VR: The Last Hope to Steam’s Early Access program because they wanted to have receive input from the community. More importantly, Croteam relies on community to have their say into what kind of a VR game they would want to play. After the HTC Vive because it provides real full room scale threading with motion controllers which allows you to literally step into the situation with all those enemies surrounding you. They liked that player can have real guns following player’s hands, and that player can also have a gun-like experience.

The developers know that there is a lot of things to explore in the future and with this game they are just scratching the surface with this first few games. They say the VR is here to stay, and it will change the way of gaming as we know it. For me personally this feels like opening a present. I have played all the Serious Sam’s and have played them since I was a kid. I am really looking forward to this new experience of this game and really looking forward to see what Croteam will do next.