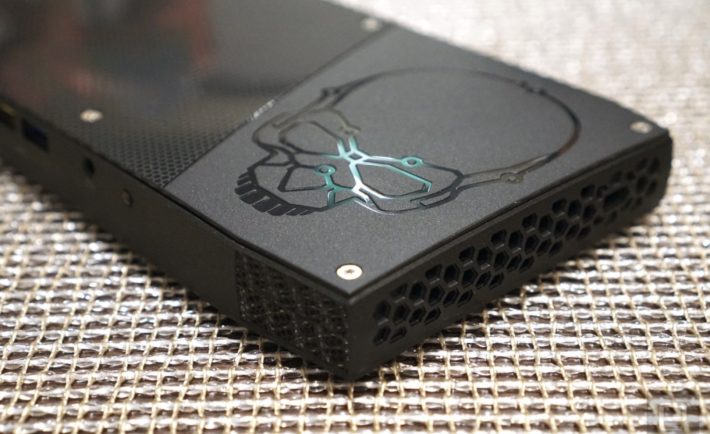 This Next Unit of Computing (NUC) mini-PC shares just two traits with its dual-core, square-brick siblings: follows the same unpronounceable naming convention and is an ultra-compact PC that can do real work. Outside of that, the NUC6i7KYK forges a different path for itself. For starters, it looks nothing like the rest of Intel’s signature line of tiny computers. This NUC is flat and long, comes shaded in black and gray, and has a huge skull emblazoned on the lid. If you don’t like the “pirate lid,” you can easily switch it with plain black lid that also comes with the case.

NUC6i7KYK is the fastest NUC money can buy today. It features a quad-core Skylake-R based Core i7-6770HQ processor, running at a base clock of 2.6 GHz (3.5GHz boost). Furthermore, this is a rare model in Skylake family featuring Iris Pro Graphics 580. The processor packs four cores, 8MB of L3 cache and 128MB of eDRAM memory. In a way, it is a shame that you can’t buy more eDRAM-based processors in a ‘socketed’ form, as this processor offers a greater level of performance compared to a desktop i7-6700K.

This machine also features two M.2 slots with flexible support for a 42 or 80 mm SATA or PCIe SSD, and with the option to run two drives in RAID 0 or RAID 1. Naturally, you will want to use M.2 NVMe based solid state drives for maximum performance. Intel also outfitted the unit with a Wireless-AC 8260 card (802.11ac 2×2 Wi-Fi), Bluetooth 4.2, and Wireless Display 6.0. Two SO-DIMM sockets can take up to 32GB of DDR4 at 2133/2400/2666/3000/3200 – the upper limit solely depends on the memory vendor. Headers are accessible underneath the user-replaceable lid, NFC, two USB 2.0 ports, and two USB 3.0 ports. As with the Broadwell line of NUCs, you can use plans provided by Intel to design custom lids and make use of these connectors.

Predictably, the kind of performance that Intel packs into this NUC doesn’t come cheap. At the time of writing, the list price for this bare-bone system is set at $597.36 on Amazon. You will need to add M2-based Solid State drive and at least one SO-DIMM stick equipped with DDR4 memory chips, and an operating system. In our case, we decided to max out the components – no stone would be left unturned. We added two 480 GB HyperX SSD from Kingston, as well as 16 GB DDR4-2400 HyperX memory. The good thing about the memory is that SPD chips automatically set the clock at 2400 MHz, resulting in 38.4 GB/s of memory bandwidth. Naturally, this comes at a price. For this configuration, you would need to shell out $1290.35 plus applicable taxes. Alternatively, removing one HyperX SSD brings the price down to a more manageable $983.84.

Can it run VR as is?

While it does offer good performance in regular applications, and you can glide through hundreds of tabs in different browsers and applications, Intel claimed you can use this system for gaming. As always, the cryptic description of gaming performance stops at “mainstream gaming”. We’re not sure what mainstream gaming counts for these days, as the unit can’t offer decent framerate in Battlefield 1, Call of Duty: Black Ops 3, Fallout 4, Sim City, F1 2016… actually, it cannot offer decent framerate which could match Microsoft Xbox One or Sony PlayStation 4. And this system, configured “as is” – costs as much as one of those “AMD announces, but you can’t actually buy” CyberPower $499 VR Ready computers paired with an Microsoft Xbox One or Sony PlayStation 4. Or That PC with Xbox One Slim and PlayStation 4… you get the picture.

After some testing we came to conclusion that this machine is not VR ready. We ran SteamVR Performance test and it showed us that the bottleneck is Intel’s Iris Pro Graphics 580. 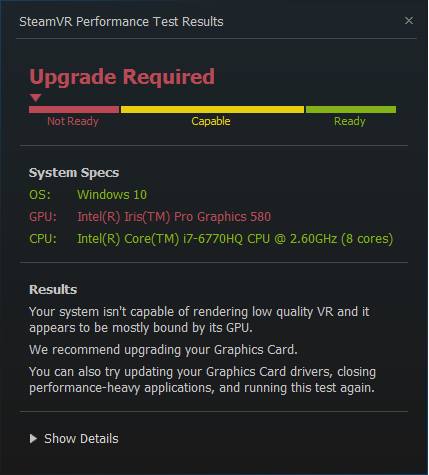 After that we ran both VRMark’s and got an average of 35 FPS in first scene, and 30 in the second one. The CPU was using only about 25% but the GPU was screaming at 100% and couldn’t go any higher. 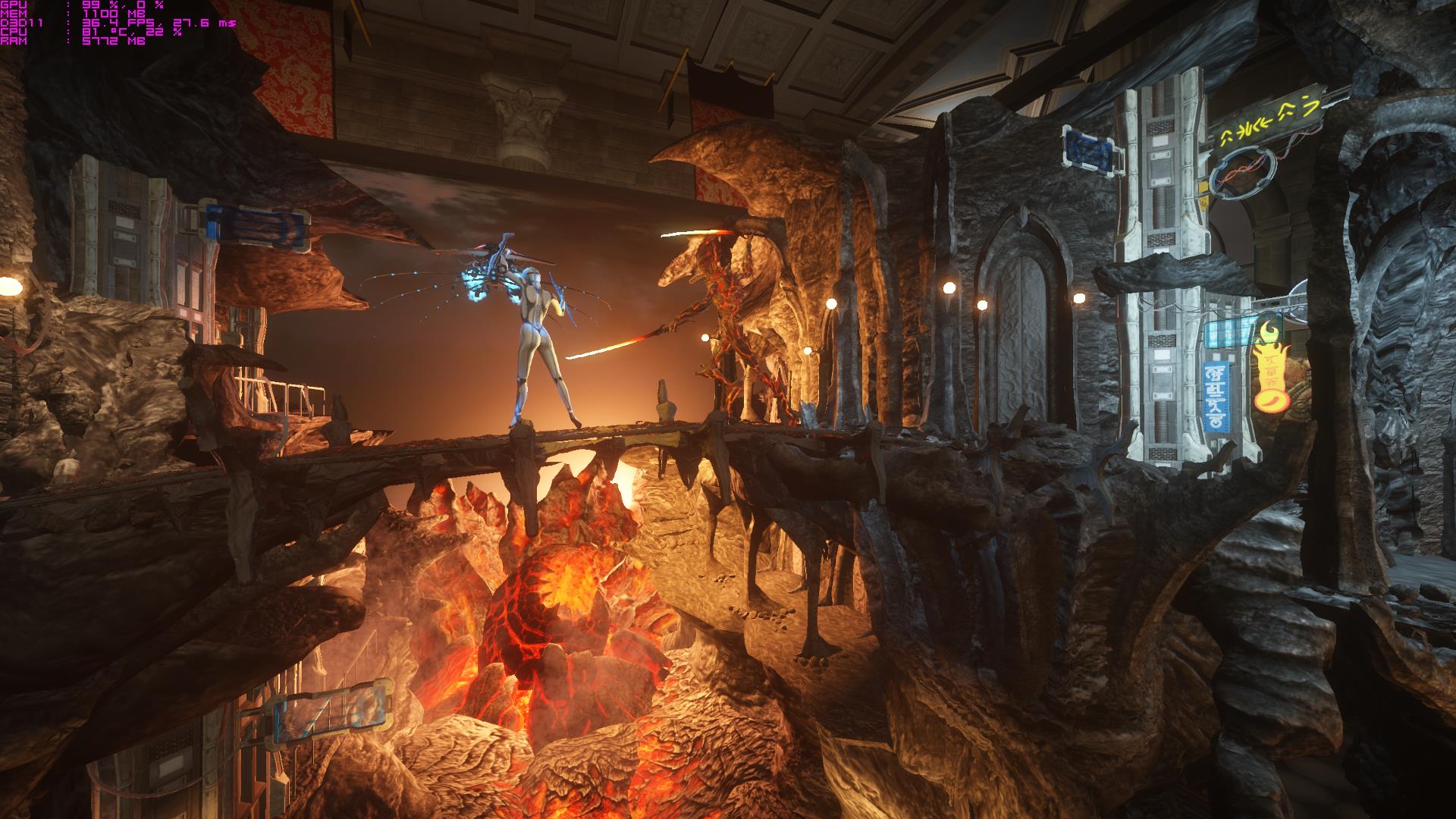 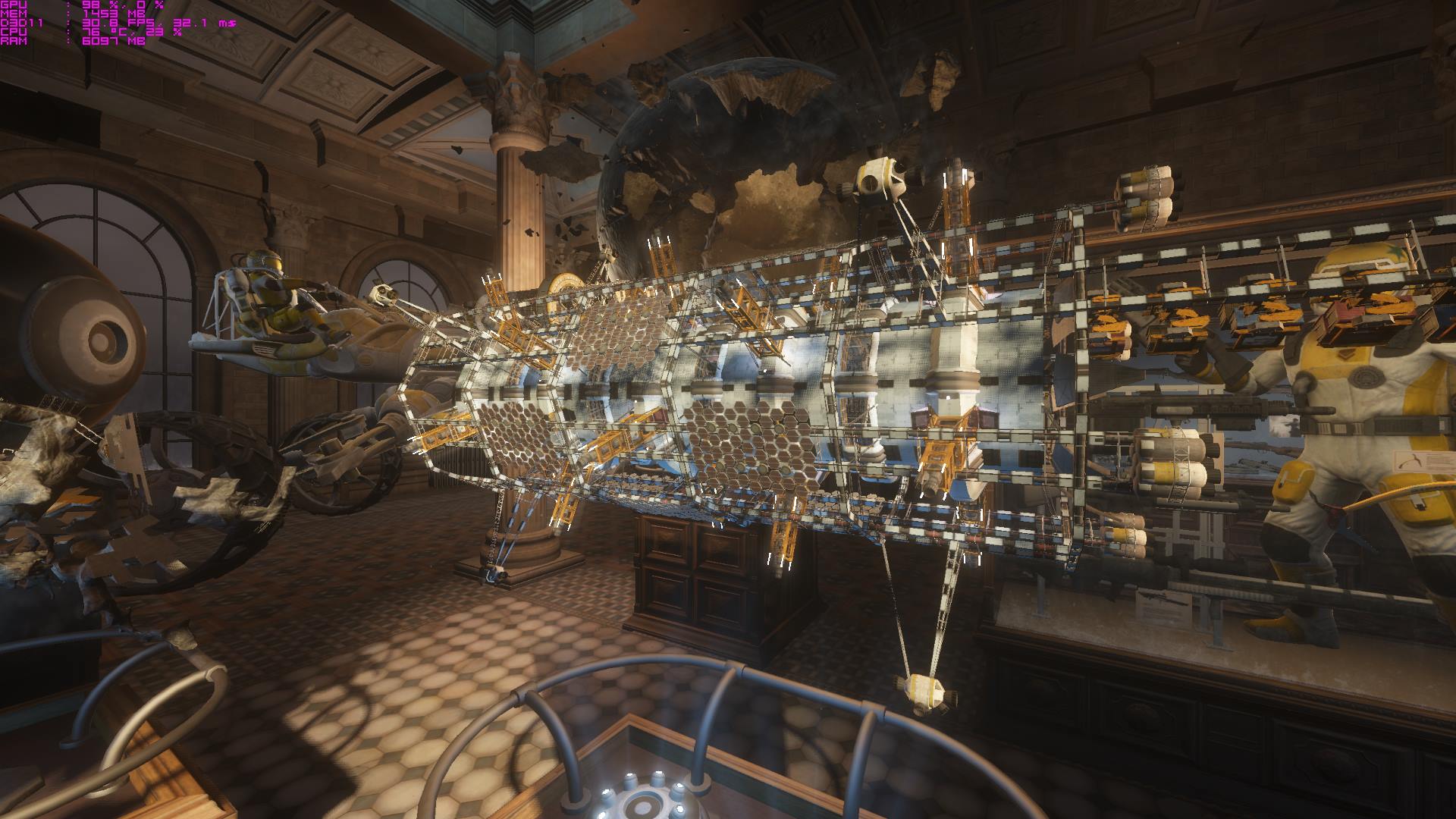 In the end we decided to run 3DMark’s Time Spy. We could see right from the beginning that this is going to be failed test. We got only 3-4 FPS. That was disappointing and there was no reason to do any more tests. So, if you want to use Intel Skull Canyon NUC for any games, or VR, you should probably buy an external graphics card. Couple of months ago, Razer unveiled their external graphics box, Razer Core. Sadly, that product is only available in limited markets and the asking price ($499.99) almost matches what Intel is asking for this NUC.

At the same time, AMD and NVIDIA are working with Oculus, HTC and others to enable access to VR to as many users as possible, with the recent launch of affordably priced $499 system from CyberPower PC, or a more realistic $699-799 price range with AMD Radeon RX 480 8GB or NVIDIA GeForce GTX 1060 6GB. For the asking price of Intel’s NUC, you can get a whole lot of computing horsepower, albeit not in such a small form factor. 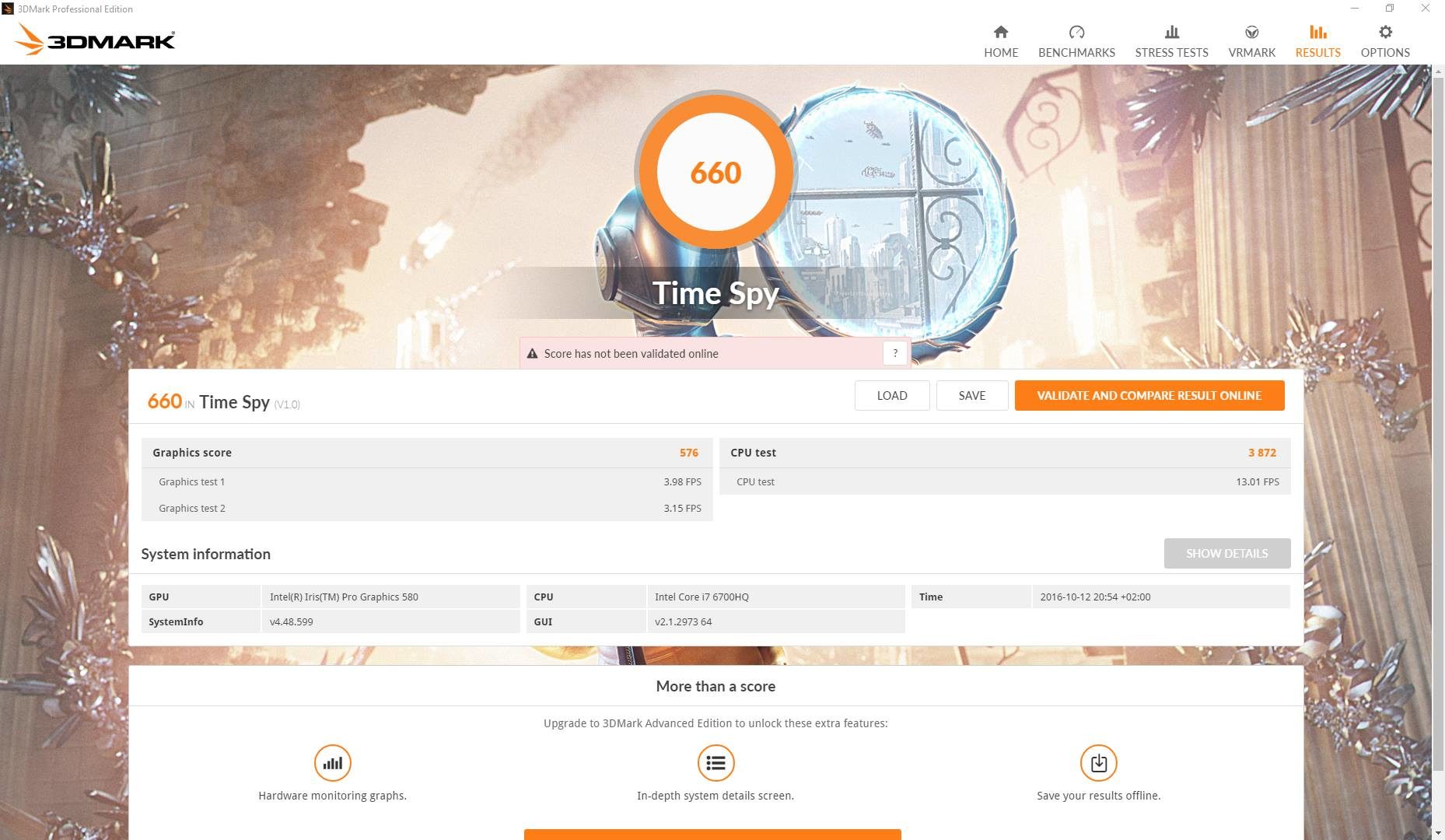 We did not expect that NUC will be VR capable, and it wasn’t. It is clear that the current pace of graphics development left Intel way behind not just AMD or NVIDIA, but mobile SoC providers such as Qualcomm, MediaTek, HiSilicon, Samsung and others. To see a $1000+ PC barely coping in 3D benchmarks does not serve justice to the effort Intel’s engineers put in other parts of silicon. Ego brushed aside, it is good to see that Intel is reacting to their position in the market, started by laying off almost their entire graphics team. Some 1000+ engineers were purged from the graphics department, and probably the only path forward will be to either acquire Imagination Technologies, license or acquire Radeon Technologies Group or… license the GeForce IP. Sadly, no 3rd party IP will come inside Intel’s silicon before we see off Kaby Lake (2017) and Cannon Lake (2018). Icy Lake in 2019 could be the first Intel processor that offers good graphics performance – provided that some of the scenarios above come true.

Until then, we do not expect Intel to offer a VR-capable product, which is a shame, as Project Alloy and the upcoming mainstream VR headsets promise a lot of new VR developments… if that Intel system is powered by AMD or NVIDIA graphics.

The way how things are right now, with the finest piece of silicon from Intel showing (once more) abysmal results – there’s no way forward. Intel already called it quits on the Xeon Phi experiment by laying off majority of the “Knights” team and acquiring Altera, the time has come to clean the house for the Graphics performance as well.