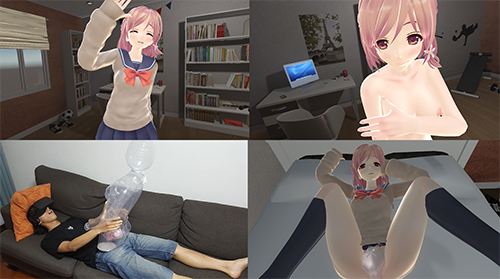 From the dawn of entertainment, the destiny of standards was often taken in hand by the Adult Entertainment industry. While frowned up in the West, several countries in the Far East have a much more relaxed attitude towards such forms of entertainment. That is probably due to the fact that they’re a highly regulated industry – more so than alcohol and tobacco, for example.

Just like VHS, DVD and the online content streaming, adult entertainment is making inroads into Virtual Reality, with one of leading publishers launching their content in English. VRJCC is a Japan based indie group that produced “Let’s Play With Nanai!” claiming to be the first ever adult game designed for VR headsets, namely HTC Vive and Oculus Rift CV1. Idea is simple, to have a VR sex experience with Miss Nanai.

The game design utilizes a smartphone that attaches to the doll, which at that point becomes Miss Nanai, reacting to the movements of the said body. This approach to game control just might as well be the first of its kind. By using gaze controls, it is possible to change her outfit and underwear.

Coming out of Japan, VRJCC teamed with ImagineVR Inc., California-based company used to localize Let’s Play With Nanai! into English and distribute it outside Japan. ImagineVR is a platform for the distribution of adult and conventional VR content via the Internet. ImagineVR and VRJCC will try to unite investors and developers from Japan and elsewhere in order to found further development of “Let’s Play With Nanai!” and found / create future content.

The video below is in Japanese (NSFW):

Funding future expansions will go through the crowdfunding platform Patreon, which just went online. You can find out more at VRJCC Website  and ImagineVR™ Website. The video showing the experience does not contain physical nudity, but we still put a NSFW – Not Safe for Work on it:

– An initiative to create additional content together with fans –

LOS ANGELES, CA (October 21, 2016) – ImagineVR Inc., the California-based company behind the VR content distribution platform ImagineVR, and VRJCC, an indie developer that produced popular Japanese VR game “Let’s Play With Nanai!”, today announce that the downloadable edition of the game (both in English and Japanese) is now on sale and that the Patreon crowdfunding campaign for “Let’s Play With Nanai!” is now open.

The goal of this crowdfunding campaign is to raise funds not only to develop the content update planned for this winter’s Comiket, but also to establish a foundation to develop future content for the game.

We also intend to acquire equipment for use in events to promote “Let’s Play with Nanai!” to a wider audience, as well as strengthen the development team and collect feedback from our supporters in order to better plan future content.

“We’re very excited that our first VR game title, developed by only 3 people, has become such a huge project. Its scope has grown far beyond what any of us had ever imagined. All we did, essentially, was make something we liked so that we wouldn’t forget the impression the first VRHMD we put on made on us. I am convinced that with the help of people around the world, we can raise Nanai to become much more than she is today. Let us discover the future together!”, says VRJCC.