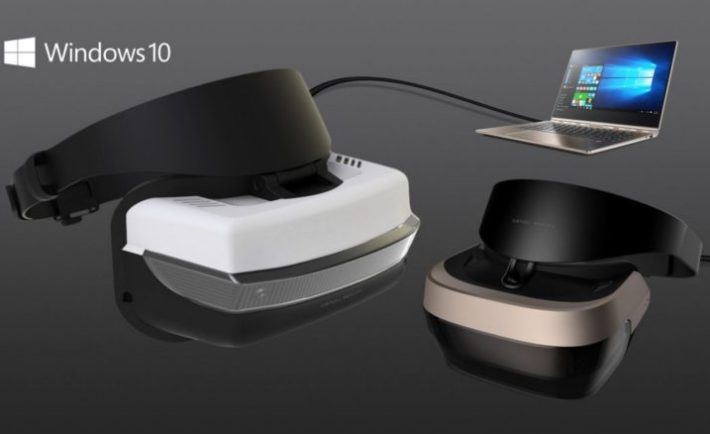 Microsoft product lineup surprised everyone today, but the biggest surprise was planned for VR fans. The company revealed a range of Windows VR headsets alongside its upcoming Windows 10 update known as “Redstone”. This update will come to market as the Windows 10 Creator’s Edition, scheduled for April 2017. This new hardware platform will be manufactured respective partners: Acer, ASUS, Dell, Lenovo and HP. Not only are these devices cheaper than the Oculus Rift and Vive, but Microsoft says they’re better too.

“These headsets will be the first and only to ship with inside-out, six degrees of freedom sensors,” said Terry Myerson, Executive VP of the Windows and Devices Group at Microsoft. “Unlike every other virtual reality headsets in the market today this means there’ll be zero need for a separate room, zero need for a complicated setup. And while those other less immersive accessories today cost over $500, most of the time requiring a new, expensive device, we’re announcing today that these Windows 10 Creators Update accessories will start at just $299.”

Windows VR represents a strategic move on Microsoft’s part, especially considering the close relationship they have with both HTC Vive and Facebook / Oculus Rift. For starters, both headsets support Xbox One game streaming on Windows 10 PCs, but the company’s relationship with Oculus runs even deeper. Every Rift sold features an Xbox One gamepad bundled inside, complete with the wireless adapter. The announcement came at the end of a reveal of the Windows 10 Update’s 3D capabilities. The company showcased a range of new features, starting with 3D model capture using HP’s Windows Phone X3. An on-stage sandcastle was quickly captured and rendered in 3D using the phone’s camera. That model was then quickly exported into a new version of the Paint app called Paint 3D. Following that, presentation continued with several features using Microsoft HoloLens. Still, HoloLens isn’t expected to come to the market before Windows Holographic Edition comes, which won’t be before 2018.

It is known that Microsoft worked with Intel on building a mainstream specification of Windows VR headsets. Intel even demonstrated its standalone concept called Project Alloy. It is also important to say that at the current point in time, there’s no available information on any of the tech specs for any of these headsets. While they may feature impressive tracking systems, we don’t know if they’ll can match Rift and Vive in terms of display quality and ergonomics. The headset concepts might be matched by price with Sony’s PlayStation VR, which is seen as a cheaper with slightly inferior technical specifications compared to Rift and Vive, but we need specifications to know for sure in what range will it be placed. Demonstration was pretty cool, and the price is amazing, only thing now is to wait for specs and more info from Microsoft. Naturally, we might end with what happened to their hardware – amazing external design diminished by the specs featuring a graphics processor from September 2014 and a central processor from August 2015.

Let’s see can Apple surprise us with their announcement, starting just 24 hours after the Microsoft one. Stay tuned.