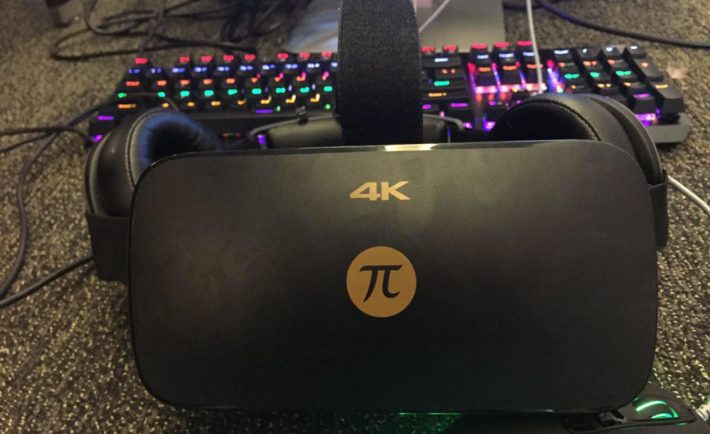 Several weeks ago, we posted the story on the very first 4K VR headset, coming from PIMAX. Apparently, the name of the company is “Maximum Pi” based on mathematical skills of the founder, but the similarity with a well known Canadian company – (P)IMAX is just too close. Given that headsets are bound to go into higher resolutions and refresh rates, we were intrigued can the relatively unknown manufacturer from Shenzhen beat the well established players on the market.

First off, the packaging – the retail package is smaller than one might expect – significantly smaller than HTC Vive, and about a quarter smaller than Oculus Rift. Inside the retail package you will find two separate boxes. First box contains on-ear headphones while the other features the VR Head Mounted Device, i.e. headset itself. Given our previous experience with the Rift headset, its a very nice touch that the manufacturer-supplied headphones are optional – protecting the investment in a highest quality headset, if you already own a high quality headset from Sennheiser, Audio-Technica, Bowers & Wilkins and many others.

The second box also features the user manual in English, cleaning cloth, top and side bands, plastic back support and of course – the VR headset itself. The straps are quite easy to put. If you want to use headphones you must put them on side straps and connect them via 3.5mm jack into the VR headset (each headphone has its own jack). You also have volume rockers and the power button on top left side of the headset, and a LED indicator on top.

HTC Vive and Oculus Rift both feature 2.5 million pixels (1.25 million pixels per eye), while PIMAX claims a consumer branded “Ultra HD”, or 4K resolution with its 8.29 million pixels. This resolution 3840×2160 splits into two, giving users a resolution of 1920×2160 pixels per eye (2K), four times as much. We asked the manufacturer about the refresh rate of the headset, and it was stated that while the panel originally uses un-VR friendly 60 Hz refresh rate, PIMAX 4K features an “overdrive” function. While the potential “overdrive” function seems interesting, as 4K panel ticking 90 times a second could represent the “silver bullet” that we are all waiting for. If you’re a pixel-per-inch enthusiast, seeing a figure of 806 PPI should make you quite happy.

Now let’s talk about comfort. The very first impression of PIMAX 4K headset on my head was – this is kind of heavy. Net weight of the whole setup is 620 grams in total with 320 grams only belonging to the VR headset itself. By comparison, Oculus Rift weights in 470 grams, and HTC Vive 555 grams. Headphones are not all that big – should you want something that will cover your whole ear you will probably have to use your own headset. The face foam cushion is fairly thin. It isn’t uncomfortable but if you plan to use this headset for 4-5 hours you could experience some discomfort or event on your face. On the positive side foam is placed there using Hook-and-loop fasteners so you can remove it easily and wash it. The headset also features routing hooks for cables on the right side (one on the headphone and one on the back support). Also there is a nose problem, it is not covered with foam and plastic on skin contact is not so great. And after a 5-6 hours of usage it started to heat up a little bit, and front side was a bit warm on the touch.

In terms of software, the setup experience was kind of a pain in the butt. You can own a company that manufactures the best hardware in the world, but it will still need world-class software and here’s where the lack of software engineers comes to mind. Shenzhen is hardware-savvy city, but software engineers aren’t exactly easily found. In order to get PIMAX 4K to work, we needed to download PiPlay first. At the end of an uneventful install, an user needs to plug in the headset. While this sounds great in theory, real world experience showed that on a fresh install of Windows 10 Anniversary Edition we needed to download these drivers multiple times until PiPlay finally recognized the headset. To keep the matters weird, Windows install keep on pushing the driver install for Oculus DK2 once PiPlay failed to detect the drivers for PIMAX 4K VR. This is a potentially limiting factor for the users, as DK2 drivers differ from Rift. As the name goes, Oculus Development Kit 2 is intended for development, while the Rift is a commercial product. And no, you cannot play Oculus Studio exclusives such as The Climb… a shame, really.

Drivers are not the only thing you need to be careful about. If you own a graphics card with a single HDMI connector, such as my trusty XFX R9 390X 8GB – featuring only one HDMI port, one must become an Apple user and start purchasing dongles. In the end, I connected my monitor using DVI. If you own latest generation, VR Ready hardware – there should be no more show stoppers.

Once PiPlay / PIMAX combination sorted itself out, we needed to do some adjustment to get rid of “crossed eyes feeling” while using it. The driver features “Compatible Mode”, bringing support for majority of SteamVR and Oculus VR games. While it sounds great, the PiPlay itself sometimes does not recognize the headset itself. I personally didn’t have noticed the problematic position tracking other reviewers and customers talk about.

After the painful installation, I crossed another problem in VRMark, our “go to” benchmark after SteamVR. The benchmark couldn’t launch in Full Screen, solvable by checking the compatibility items around DirectX 11. Even though both SteamVR and Oculus test mark our reference system as “VR Ready”, the realities are that there aren’t many systems that can tackle this monstrous resolution. PC Requirements from PIMAX states that you satisfy the following components:

My current configuration is as follows:

This PC exceeds the minimum configuration by a mile, yet it still did not manage to crack 90 fps in any of the tests. 78 FPS in Orange Room, and 41 in Blue Room. The real question now is could a GeForce GTX 1080 and or a Pascal-based Titan X run Blue Room at 90+ FPS. Given the recent developments in Multi-GPU support inside DirectX 12, and AMD’s traditionally high results as their hardware age one must wonder should NVIDIA be scared of this type of tasks. After all, a single GeForce GTX 1080 should give you the performance needed to run VR. Then again, the question beckons –  should VR gamers simply buy two RX 480 instead.

For games, having a powerful system could help with Assetto Corsa or Elite Dangerous. Furthermore, if you’re not into VR, but want to game on a really large screen, installing Virtual Desktop 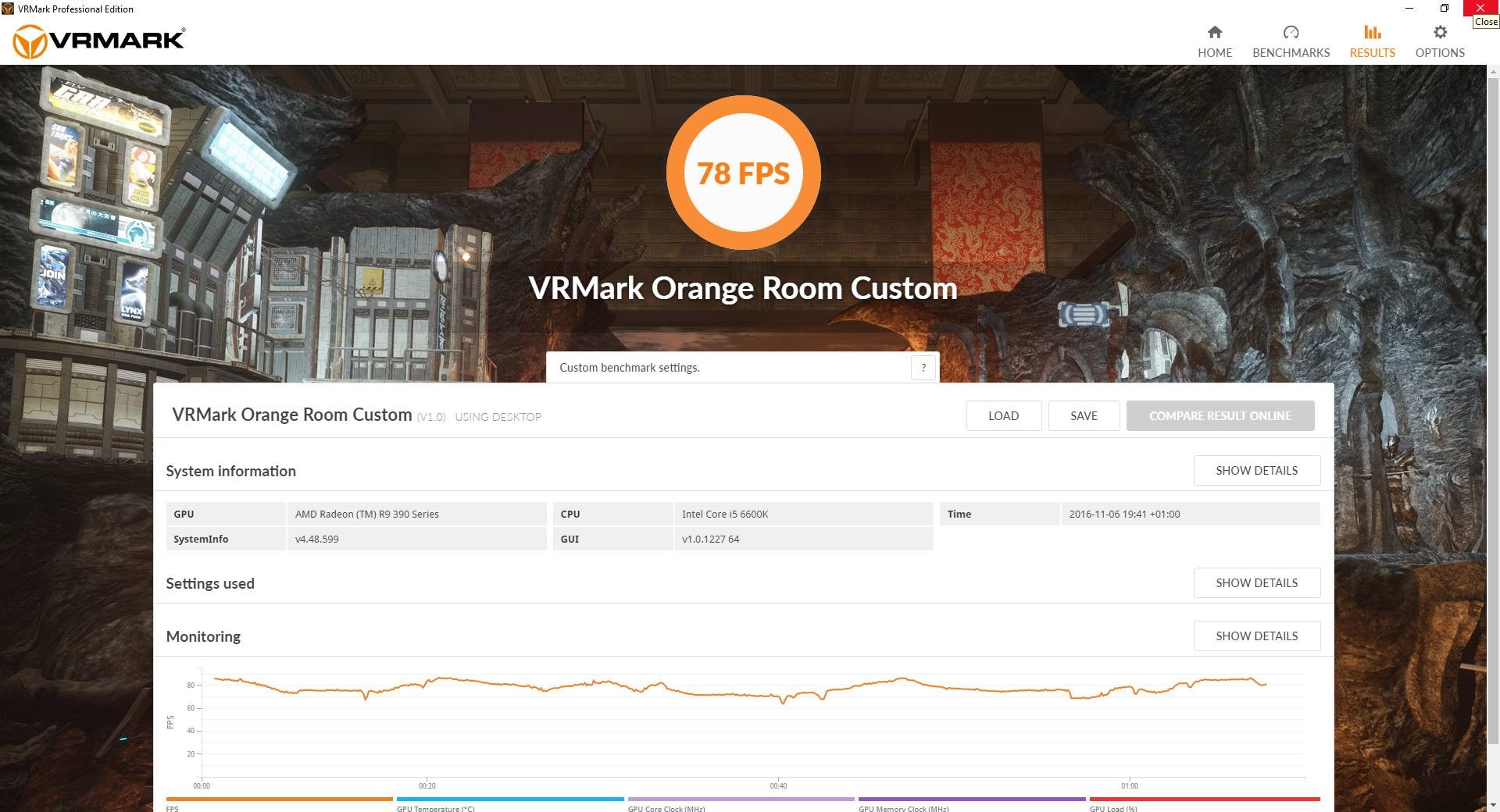 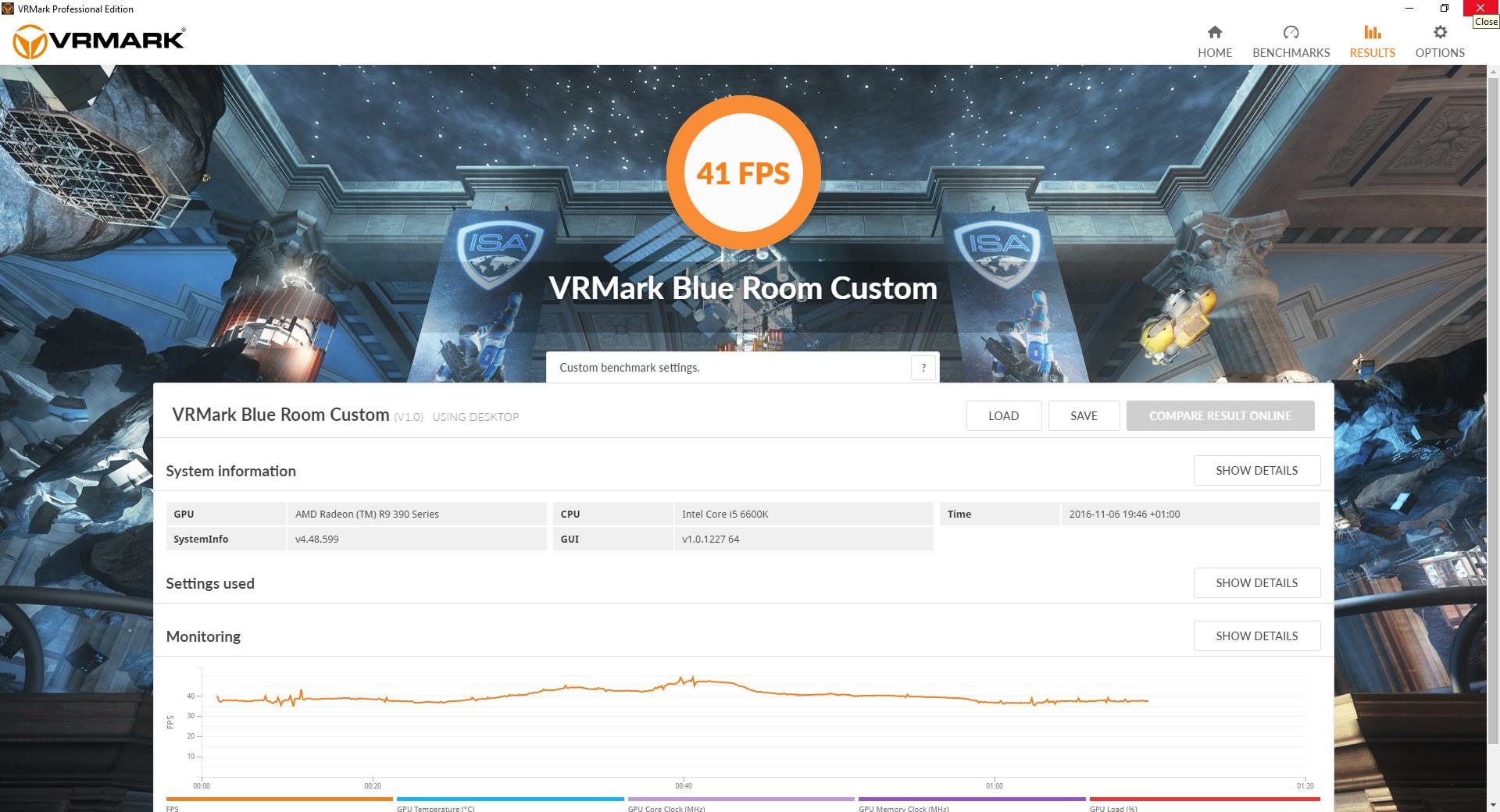 Overall we couldn’t see the full capability of this VR headset. For the half the price asked for Rift and even more for HTC Vive you can get headset that is better in some aspects. With some minor tweaks this headset would be a beast. If they added sensors for the room and controllers, and managed to build a working software of course. You can feel the 110 degree viewing angle, as well as lack of any pixels on the screen – which annoys me with the otherwise excellent Vive. All things considered I wouldn’t blink an eye and take Pimax for all VR stuff I need (virtual desktop, and maybe watching a movie). If you want to buy it yourself you can do it here. Pimax will also be on discount on Gearbest 11.11 event, so you can save even more. The Singles Day in China, i.e. 11.11 or November 11th is a new increasingly global day, bringing the tradition of Black Friday several weeks before the actual event. From Singles Day onwards, the price of the headset is down to $286.99 if you use the “PIMAX11” code.

4K resolution gaming is a rare breed, but will start to become more common. Ultra HD gaming in VR is a dream for now, as the amount of hardware horsepower you need to run 750 million pixels each second is staggering. Both HTC and Oculus don’t require more than 233 million pixels each second. this is not so bad VR headset considering it costs around $300. From the comfort perspective, and supported titles – it is way better then OSVR HDK 2.0 that’s in the same price range. This headset you will get a good device hardware-wise but with mediocre software and limited functionalities. By including a few minor tweaks, controllers and room positioning, PIMAX could easily become next big thing in world of VR. This is also the main reason why we cannot give a higher award than Bronze. We could conclude that PIMAX 4K is a product a bit ahead of its time, but if you want to impose on your surroundings by owning the first 4K VR headset, by all means – consider PIMAX. 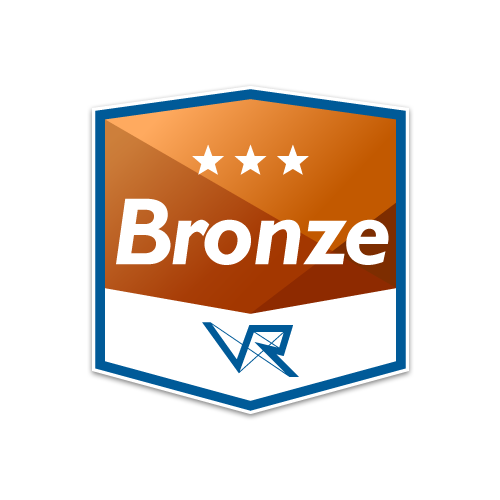