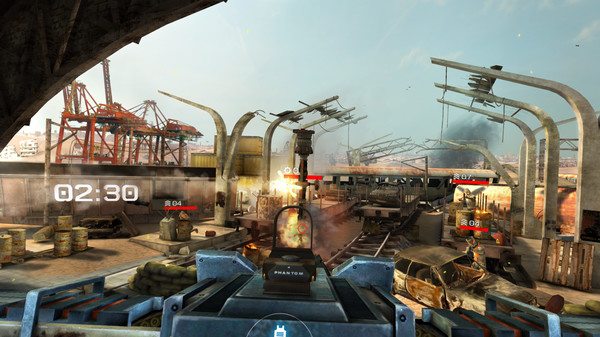 Overkill keeps its name in the news. We’ve tested the game extensively through our first look, and reviewed the early access version of the game created by GameTroopers. Word has reached us that the game developers brought several new updates to the game which brings the title to more platforms.

Yes, the biggest update is the expiry of HTC Vive “exclusiveness”, as Overkill VR now fully supports Oculus Rift and its Touch controllers. Given the “dead race” both manufacturers have battled over, it is good to see the titles being available across the range of platforms. Besides Oculus Rift and Touch, this is one of first titles on the market that ads the “Mixed Reality” mode, as you can add an external camera configuration file, attaching to the game .exe file. This will allow you to make some cool gameplay videos. Difficulty was increased for some East Slums levels. You will be flanked more frequently, so we advise you to be more careful. Fire rate on MK23 pistol increased as well.

There were no major bugs in the game – at least not that we could see (we used an AMD-based GPU). GameTroopers also fixed some of the minor bugs, such as graphical glitches in this new patch, such as fixing the reflex for the MK23 pistol. Developers also fixed a bug when a user would get stuck after a loading screen. There was also a bug with not showing main menu after going back from mission. GameTroopers also improved first cover on East Slums 5, as it was a bit too high. Warmap can be scrolled with the right analog correctly now.

This is not the end to Overkill VR updates, as GameTroopers are now working on a major update, something like a Holiday Season 2016 update. Set for a release over the next couple of days, it will include users requested features such as manual reload, grenades, rocket launcher, nine (9) new levels and more. Stay tuned for more updates about this game. If you haven’t already, you can read our first look on Overkill VR here.