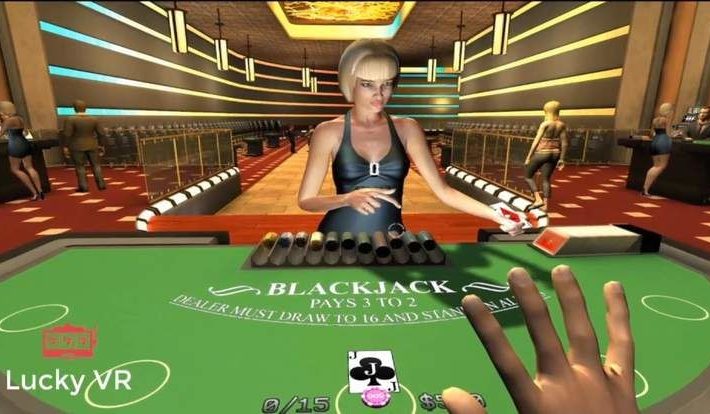 Thanks to digital casino developing giants NetEnt; by the end of 2017 players will be able to completely immerse themselves in the world’s first VR digital slot. The concept of Virtual Reality casinos has been discussed since the technology was first conceptualized and they are finally here for all to see. Virtual Reality has been touted as the next big step in immersive gaming but early applications have been predominantly geared towards the video gamers rather than the online casino customers. The demand for VR is expected to be enormous and the forthcoming NetEnt VR slot only adds to the anticipation.

NetEnt are in the testing stages of their Virtual Reality slot: Gonzo’s Quest VR and the concept is utterly mind blowing. A fully rendered environment, based on the original Gonzo’s Quest slot, has been created with interactivity for the slot itself, compatibility with real money wagering and several levels and characters to play through – VR is science fiction no longer.

The game isn’t quite ready for public access just yet but NetEnt are confident they will have the game ready for the open market by the end of 2017/start of 2018. This huge step forwards in Virtual Reality casino gaming will no doubt open the floodgates for more casino games to be adapted in the near future. Running on latest version Unity Engine, the experience promises to be compatible with all the major mobile headset products, available through Google Daydream platform.

NetEnt have suggested that a totally immersive casino is some way off but, by creating the games individually, the process should become much simpler in theory. The most likely outcome for the VR casino will be a rendered lobby of sorts that has gateways to the games themselves allowing for various servers to be accessed from one central hub.

This is still a concept at present but, with Gonzo’s Quest VR due before the end of the year, the chances of a totally immersive VR casino before 2020 are looking ever more positive. It’s unlikely the VR revolution will see a decline in traditional casinos and online play but it’s just another string to the bow of the gambling industry.

Who knows; perhaps in a few years time we wont need to pay by mobile casinos and we will all be donning our VR headsets for a spin on the slots or a stint at the tables to slake our need for online gambling. It’s a long shot to think that everyone would want to immerse themselves but the mass anticipation for Gonzo’s Quest VR gives a clear indication that the market is bigger than first imagined.