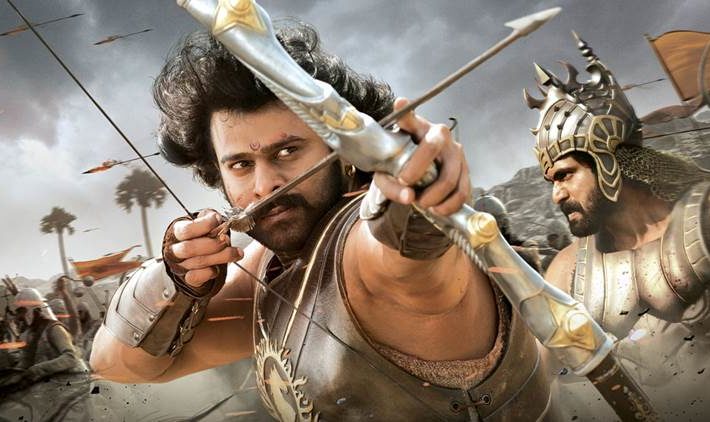 There’s no denying that the Indian movie industry is one of world’s leading cinemas, and one of most productive industries in the world. The amount of Bollywood movies that are coming out is just staggering, and easily beats Chinese or the American production capabilities. However, the need to support multiple languages (Hindu, Malayalam, Tamil, Telugu – barely any English) caused strain on the budgets, limiting the directors vision. Enter Baahubali Series, with the second movie breaking all the domestic and global records for an Indian-made movie.

Baahubali 2: The Conclusion opened on a record number of theaters in India, numbering more than 7,000 screens. That is followed with a record number of screens for any Indian-made production, over 9,000 screens across the globe. Looking at movie theater schedule in Irvine, California shows Baahubali 2: The Conclusion being shown as the headline movie for the weekend (will be replaced by the Guardians of the Galaxy Vol.2), but the sheer matter that a Bollywood movie is serving as an intro for a multi-hundred million dollar production speaks volumes. At the end of the day, Baahubali is a Tribeca Movie Festival title.

This series is not just the movie, as legendary producer S.S. Rajamouli also created VR Experiences, which transport the viewers in the world of Baahubali in quite the immersive way. The movie series highlights the collaboration between AMD, or Radeon Technology Group (RTG) and S.S. Rajamouli, legendary producer. In order to push the Indian movie industry to Hollywood levels, AMD was an instrumental part of the Baahubali ecosystem, even releasing graphics cards which were made to fit the movie budget. Needless to say, targeting Indian Bollywood means the company needs to offer price/performance ratio… and ship incredible amount of Radeon and Radeon Pro cards.

If we look back into 2015, Baahubali: The Beginning could be viewed as one of catalysts of Indian movie industry. The list of revenue records is remarkable for a 28 million USD production. Today, the movie is available freely on YouTube, marking a sharp disconnect between Hollywood and Bollywood, who would probably keep this movie on Blu-ray forever. Regardless of the language (Hindu, Malayalam, Tamil, Telugu) you can watch or look a the move in its 4K glory.

In order to make Baahubali 2 a reality, AMD created a 360-degree spherical VR camera, as well as special graphics cards, such as Radeon Pro SSG, with 1TB of SSD onboard; Radeon Pro Duo with two Polaris 10 GPUs. The latter is equipped with 32GB of GDDR5 memory, 72 compute units (4608 stream processors), designed to fit the demanding workloads for Bollywood/Hollywood productions (and the data streamed from the 360 camera). The 2017 edition of Radeon Pro Duo will start shipping by the end of May for $999.

This small insight might be the reason why we are baffled with short traders which pummeled the stock this week, without paying any attention to the reasons why AMD revenue grew 18% YoY. The professional segment grew thanks to collaborations like Baahubali, which all have the potential to trickle down into a waterfall and open new doors for the company, now with Ryzen, upcoming Naples for Servers and Workstations (yes, AMD is doing a “two more sockets” launch this year). We are aware of several other projects AMD / RTG is working on behind close doors, and it will be interesting to see the results. For now, Baahubali looks like a runaway success.