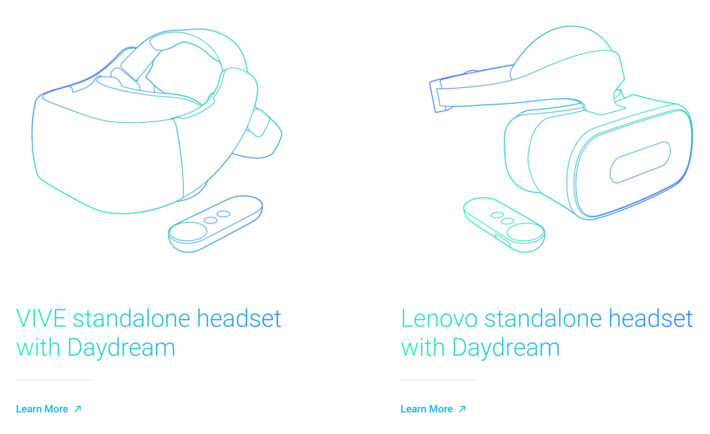 At its annual developer conference called I/O, Google announced standalone VR headsets for the Daydream VR platform, the first of which will be made by HTC and Lenovo. Supporting these new devices is WorldSense, an inside out positional tracking system which supposedly “dramatically improves tracking” when compared to previous Daydream devices.

WorldSense is a product name for a positional tracking system that operates on an ‘inside-out’ principle; it doesn’t need any external sensors or beacons to track the movement of your head through 3D space. The new fully self-contained ‘standalone’ Daydream VR headsets will use the new tech to allow for positional tracking which Google says “dramatically” improves the experience compared to prior Daydream devices (and we agree, good positional tracking is a huge benefit to immersion and comfort in VR).

The company worked with Qualcomm to create a reference design for these headsets, though it is not clear when this collaboration started. New VR headsets will be based on Qualcomm’s Snapdragon 835 VR platform, running on light version of Android 7 Nougat which only runs Daydream. This VR-and-VR-only experience is viewed as an evolution from the original “Mobile VR” ecosystem Google established last year, accessed through certain other “Mobile VR” headsets using head mount-adapters for smartphones. Pictures of the first devices include what looks like the Daydream controller of today, a three degree of freedom controller (3DOF).

WorldSense, meanwhile, will provide ‘positional tracking’, like seen on Oculus’ Santa Cruz prototype. The term inside-out tracking was not used, and a brief video showed the headset moving as if it was leaning rather than walking around a space.

There is still no word on pricing for these headsets, and that remains the biggest stumbling block for mainstream adoption of VR. Oculus made a strategic mistake with a very affordable (obviously subsidized) development kit, and then jacked the price of retail devices. Considering the new VR headsets feature hardware typically found in the fastest smartphones of today, we do not believe “Daydream Standalone VR” will come cheap. Prices of the phones with the same specs land in $300 bracket for Chinese phones, and 2-3x that for more recognized brands. Given the price of Google Pixel phones, we would not be surprised if a $600 price tag would be attached to them, making them less affordable than Oculus Rift or HTC Vive. We will see how it will play out since HTC is one of the partners on this, and until then, it’s a waiting game.