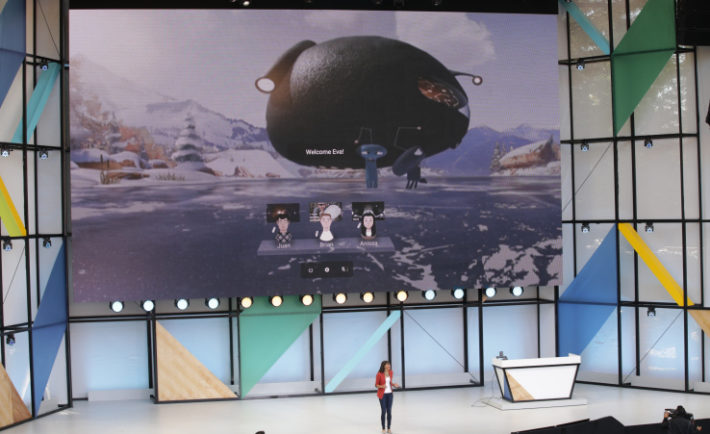 As a part of a broader push, YouTube is now working on making its virtual reality app a more social experience. During Google’s annual I/O developer conference, the video site announced that the VR users will be able to watch VR videos together while in its VR app. Not far away from a movie theater experience, the goal is that a viewer is put together with a small group of friends that can sync up videos to watch together simultaneously and talk to each other about what’s going on. At the bottom of the screen, users see which of their friends is in the “room,” along with a animated, cartoon-style avatar for each of them. One of the first demos YouTube VR showed off was a video from the legendary music collaboration ‘band,’ Gorillaz.

While Silicon Valley giants have been enamored with virtual reality, they have to work on ‘flipping the script’ for the stereotype that VR is isolating. Just like social networking or playing computer games, we’ve been listening to tens of ‘experts’ stating that VR is an isolating experience, will lead to more social isolation etc. Naturally, we all know what happened with eSports and social networking, from couples getting married in World of Warcraft some ten years ago, to a generation of people that doesn’t understand the concept of borders because they have friends everywhere.

Just Last month, Facebook announced a social platform for its Oculus headset, called Facebook Spaces. In that app, users can get together with other friends’ avatars in a VR world to do things like watch videos or draw. Cue in Cards Against Humanity, and VR can become a social experience bar none. This kind of socialization, coming from YouTube and Facebook – will surely impact the viewership of famous Youtubers. It could also significantly lower the amount of comments depending on the type of the content. The reason of that is that the voice is the main type of communication, rather than typing. Add in Google’s Translation efforts, and the borders are indeed coming down between people of all nations.

YouTube VR and Facebook Spaces both sound a bit like Oculus Rooms, which provided spaces where people could hang out and chat through the Gear VR. Linden Lab has also showed off a group 360-degree video platform in its virtual world Sansar. More generally, many VR social networks let people hang around and watch videos together. Google’s co-watching experience seems a bit different, you’re communicating with friends, but under the illusion that you’re all in the center of the same 360-degree video, not sitting with each other in a virtual living room. We’ll have to wait to find out how intimate that feels. YouTube’s new feature will be available “later this year.” Until then, we will have to keep on watching videos the old fashioned way.