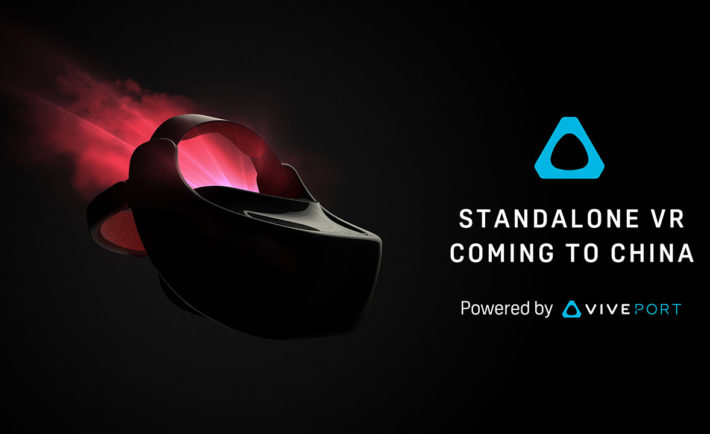 The first day of ChinaJoy in Shanghai, China saw the largest number of VR announcements we’ve seen since we started to talk about Virtual Reality. Perhaps the biggest announcement of the first day is HTC, who launched a Vive Standalone headset. The first Vive Standalone VR headset will be available only on the China market, utilizing Viveport as its official content platform, expanding the user case scenario for HTC’s VR strategy.

“The new headset is set to deliver an outstanding standalone VR experience, making it the best-in-class premium device for this segment in the China market. Interested VR developers may register at www.viveport.com/standalonevr-cn to apply for participation in Vive Standalone associated support programs and get early access to upcoming developer events.” stands a quote from the press release. Headset was first revealed in a teaser trailer in time for Google’s I/O conference, which you can see below:

Vive Standalone offers a more affordable, yet high-quality VR experience to broader audiences, removing the requirement for an external PC or smartphone to operate. Vive Standalone is powered by Qualcomm’s mobile VR platform. The heart of the platform is powerful Snapdragon 835 processor, designed to support built-in VR functionality and allow developers to more rapidly release compelling content. We first tried the prototype headset on GDC 2016, and the final release presents a much polished and faster product.

“China is the leading mobile market in the world today, and has the momentum to lead the global VR market as well,” said Alvin W. Graylin, China Regional President of Vive, HTC. “Partnering with Qualcomm to deliver an easy to use and more affordable Vive VR system will enable us to make premium standalone VR widely accessible to the masses in China.”
“Snapdragon 835 is designed to deliver superior VR experiences without the need for wires or a separate PC,” said Hugo Swart, Senior Director, Product Management, Qualcomm Technologies. “We are thrilled to work with HTC’s Vive team as they utilize our rich feature set to create exciting, new VR experiences in the first truly mobile VR headset of the Vive ecosystem.”

Not a lot of details were revealed, except that we know Vive Standalone for China does not use Google’s technologies such as WorldMotion Tracking or Daydream. Viveport is the only way to get content, while tracking technology is probably coming out of Qualcomm’s labs. No words about system memory or on-board storage, either.