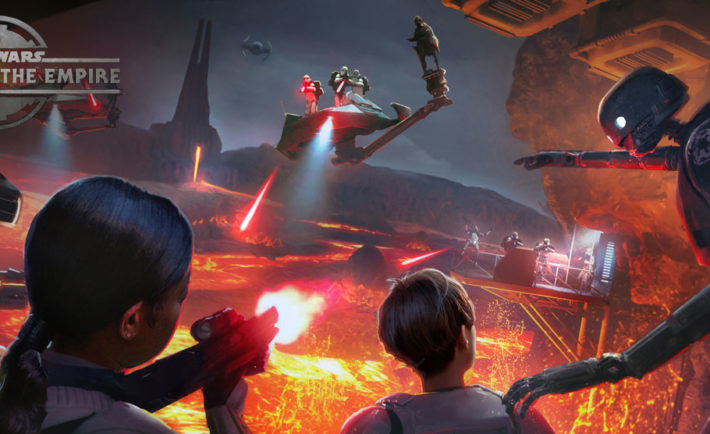 During the “great entertainment war,” The Walt Disney Company faced a challenge from the Dalian Wanda Group and decided to go all out on its properties and super-charge the connection between its franchises and entertainment parks. Disney figured that all that it needs to ride the storm is accelerate the production of new content, as well as enhance interactivity between visitors and its content. We already reported on Guardians of the Galaxy in VR, now the time has come for Star Wars and the new VR multiplayer experience called Secrets of the Empire.

Star Wars: Secrets of the Empire puts a number of players inside a pre-built environment where they will face a number of challenges over the course of 10-15 minutes, which is how long the experience will take. The experiences are being developed by The Void, which is quickly building a name for themselves with team-based VR experiences that will make you sweat. While The Void has four centers (Dubai, New York, Salt Lake City and Toronto), Star Wars: Secrets of the Empire will only be available at two Disney locations; Downtown Disney in Disneyworld (Anaheim, California) and Disney Springs at Disney World (Orlando, Florida).

Both locations will be located in the public area, meaning you don’t need to buy a ticket for the whole Disney experience in order to enjoy in The Void’s vision of Star Wars. The prices are not announced, just bear in mind that typical prices for The Void experiences go around US$25. Expect a whole new level of immersion.

To remind our readers, we’re showing you a trailer for the first “Experiment” from ILMxLAB, a dedicated studio for building interactive experiences from Disney’s numerous franchises. Star Wars: Trials on Tatooine VR was used to provide a baseline for their future experiences, especially in the lightsaber / human connection.

That knowledge is paired with rich knowledge base owned by The Void, whose Ghostbusters: Dimensions experience is one of best cases for VR we’ve encountered so far:

Star Wars: Secrets of the Empire debuts for Holiday Season 2017.