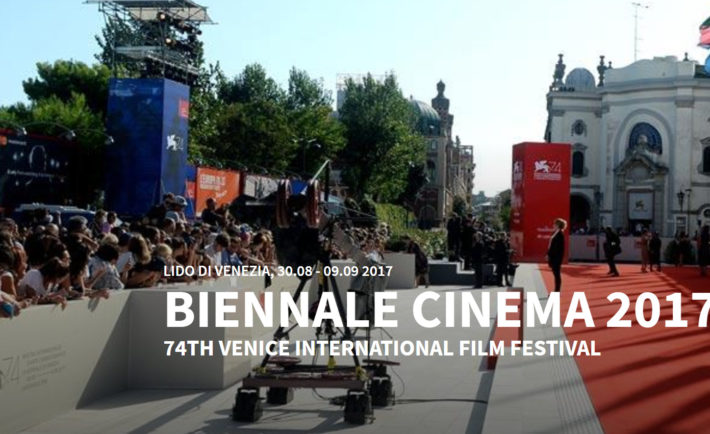 Amal, 39, shimmered on the Venetian red carpet wearing a flowing purple frock while George, 56, looked dapper in a suit. The Clooney clan were earlier spotted taking a romantic boat trip on Venice’s iconic waterways and they also dined with Matt Damon and his wife Luciana Barroso during their Italian jaunt. Their stay in the picturesque Italian city for its annual film festival, just three months after Amal gave birth to twins.

And while this sounds like another boring star report not usual for VR World – it actually isn’t so. It seems that VR industry is coming to their lives and, no ladies, we are not gonna have a VR ‘hubba-hubba’ with George if that’s what you meant.

What happened is, that human rights lawyer Amal was actually very interested in the documentary called Greenland Melting. This movie, made from Nova, Frontline and the Emblematic Group has been premiered as part of the Venice Film Festival’s VR lineup. In a film that might convince even the most strident of climate change deniers, PBS series Frontline examines the rapid melting of the Arctic ice sheet. The result, Greenland Melting, is a 3D, 360-degree virtual reality film that hopes to bring home the physical reality of epic changes occurring in the northern hemisphere. You can watch the whole five minute experience below – get your VR headset ready.

This isn’t the first time that the VR is presented to movie industry. The 2016 Cannes Film Festival featured a festival first: screenings of virtual reality (VR) short films and presentations in a pavilion dedicated exclusively to VR.

Motion pictures have surely undergone many changes since the first procession of sequential images flickered to life before an audience in the early 20th century. They have transitioned from silent to full of spectacular sound and from black-and-white to color. But are we really ready  for dramatic changes of world of cinema?

This year, Venice Film festival director Alberto Barbera decided to add a whole island dedicated to Virtual Reality. He thinks that there is a lot of investment from the film industry into VR because it’s their opinion that there is  a very strong opportunity for a new market based on this new technology.

“At the same time a lot of filmmakers are very curious about the possibilities of using this technology to create a new aesthetic, a new experience and a new language maybe. In a way, we are in the same position of D. W. Griffith and the Lumière when they invented something new out of nothing. This is the same case.” said Barbera for The Huffington Post. He also added that the VR isn’t the future of cinema or even an extension of cinema but it’s another medium. “I’m pretty sure it will stay, but it’s a completely different experience. So, we thought it was the moment and made a bet again. We didn’t know how many submissions we would have, we thought about 20 to 30 and we got more than a 100, maybe a 120 in total. So the content is there, the quality is there, maybe not from the point of view of technology, but that will come soon enough because it’s so fast, the content is there” he concluded.

A study from PricewaterhouseCoopers (PwC) suggests the technology will soon go mainstream. Movie studios already are already working on first-person VR experiences allowing, for example, people to become an ape in Planet of the Apes or adopt Matt Damon’s character in The Martian. Whilst Facebook-owned Oculus Rift retails for upwards of $500, cheaper VR headsets are available, and prices are only likely to fall. Options are also available via smart phone.

Including VR in its annual Entertainment & Media Outlook forecast for the first time, PwC predicted a growth rate of 64% annually for the next five years. That would make the technology a $5 billion industry – in the US alone – by 2021. It will generate almost half as much as the cinema box office, which will grow at just 1.2% to $11.2 billion. One should not forget the breakneck pace VR is experiencing in China.

Start-ups such as Jaunt VR (featuring Disney as an investor), Within, Baobab and Penrose Studios are creating original VR short films and TV-style episodes. 21st Century Fox, which created FoxNext in January, is one of the most active participants. Its War for the Planet of the Apes production will be released in July.

“VR will continue to develop and be adopted at an accelerated rate,” predicts FoxNext VR studio general manager Brendan Handler. “It gives filmmakers an endless canvas to tell stories and offers consumers what they have been craving: more immersive experiences.”

But not everyone is convinced that virtual reality should be part of cinema’s future. During last Tribeca movie festival, director Steven Spielberg said he’s skeptical about VR’s effectiveness as a storytelling tool, and questioned whether it should be seriously considered as a means for developing and presenting visual narratives. He called VR  potentially “dangerous” because it allows the viewer too much freedom to make their own choices about which parts of a story to engage with, rather than presenting them with a single, fixed narrative path crafted by a writer and director. Several months later, Steven Spielberg signed to produce a movie version of cult book Ready Player One. Spielberg is also directing Ready Player One VR experience.

Sure there are pros and cons to virtual reality entertainment. It definitely allows for a fresh, alternative form of recreation, combining both film and gaming.  And while it would be surely interesting to explore some Clooney ‘hubba-hubba’, I guess not everyone would be thrilled with the possible negative feelings that some viewers might have. In order to capture as much audience as possible, Stephen King and Twentieth Century Fox teamed up to bring a scary VR experience to life. Directed by David F. Sandberg, IT: Float experience is now available on YouTube. Real-world release of the experience should happen in VR Arcades and VR-enabled locations on September 8th, 2017, alongside the feature film release.

One thing can be sure – the future is now. VR is happening and it’s coming to a cinema near you.