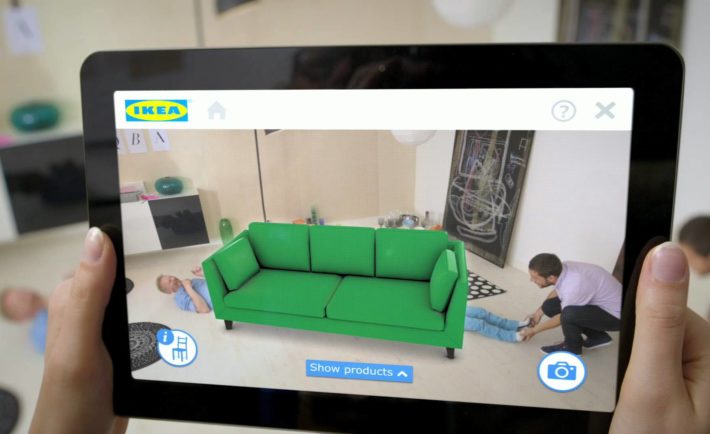 Swedish-based furniture manufacturer IKEA is known for not just designing and manufacturing assemble-it-yourself furniture, but for being the pioneer of its kind by letting technology inform its business. According to Wired.com, there is a new app called Ikea Place that’s not just bringing Swedish shelves and tables to life in your living room, but also lets you put your sofa on the street if you feel like doing it. Previously, IKEA already had released a Catalog app with a similar 3D visualization tool, but the user interface was tiny and it required the physical paper catalog for it to work properly.

“IKEA Place makes it easier to make buying decisions in your own place, to get inspired and try many different products, styles and colors in real-life settings with a swipe of your finger. Augmented reality and virtual reality will be a total game changer for retail in the same way as the internet. Only this time, much faster,” said Michael Valdsgaard, Leader Digital Transformation at Inter IKEA Systems.

Other retailers like Lowe’s and Pottery Barn also have their own AR apps, but they’re working only with Google Tango-enabled devices. So unless you’re the proud owner of an Asus ZenFone AR or Lenovo’s Phab 2 Pro, you still have to walk into those stores. You can download the PLACE for free from the App Store but only available if you’re living in the US. You will be also needing a contemporary device with at least an A9 processor running the latest iOS 11 for Ikea Place to work properly.

It is definitely fun to make your bedroom a SimCity look-a-like but sometimes, you just want a real taste of those meat balls, don’t you?

In case you would like to explore building your own AR app, IKEA turned to creating the PLACE app using Apple’s ARKit. The popular AR development tool enables the new generation of content and to see what an ARKit could do, you can watch the introduction video below: