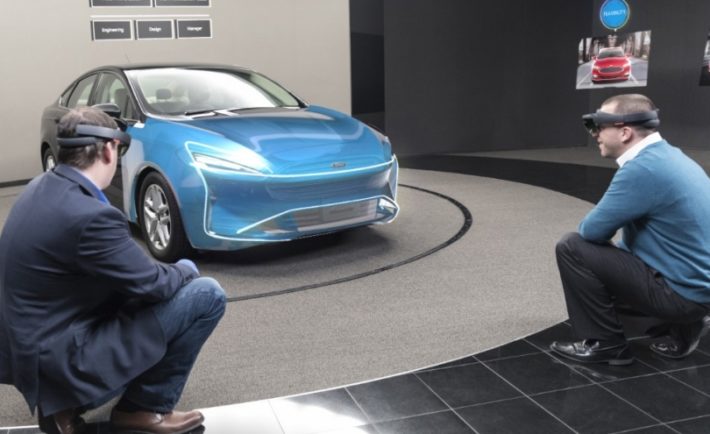 Ford has started equipping its designers with Microsoft’s HoloLens, the augmented reality technology Microsoft is rolling out for commercial and industrial applications. While the companies are purchasing $5,000 HoloLens Commercial Suite headsets, the components themselves are subject to change for specific customers. We’ve heard stories of customers that bought HoloLens Commercial Suite and received (now cancelled) 2nd generation. Then again, all of this is a warm-up for the 3rd generation HoloLens, planned for a commercial market launch as early as next year.

This is not new in the world of car industry since HoloLens headset has been slowly pivoting towards commercial markets over the past year. NASA, Volvo, Lowe’s, Audi, and Volkswagen are all testing HoloLens for various reasons, and now Ford is expanding its use of this headsets after an initial pilot phase.

According to Ford, this change in process cuts down the time it took to explore potential new features for future vehicles from weeks and months to mere hours. The augmented reality features the HoloLens possesses allows the car manufacturers to simply overlay various features on top of a standard car or clay model rather than having to fine-tune them manually.

“The potential of these devices, is that they could one day replace your phones, TVs, and all these screens,” said Alex Kipman, Microsoft Technical Fellow and chief inventor of Microsoft’s pioneering augmented reality headset HoloLens. “Once your apps, videos, information, and even social life are projected into your line of sight, you won’t need any other screen-based gadgetry.” In an interview with Business Insider, Kipman calls it the “natural conclusion” of mixed reality.

Over the next 5 to 10 years, most industry analysts agree that the AR/VR market will be worth well north of $100 billion, with the vast majority coming from the AR side – in the form of consumer innovations in retail, location, or AI services. Although Microsoft enjoys an industry-leading position, it does face other threats from both new hardware entrants and established platform holders.  Read on to see how the battle lines are being drawn – and what potential outcomes could emerge over the medium term.